Fear and Longing in the Holidays

Most of my blog posts are about my "making" -- of things.  Re-purposing fabric, floss and fibre into art and utilitarian objects.  I write about process, progress, practice.

But those of you who've been following my blog for the nearly 20 years it's been around, and those of you who know me personally, will have also read some of the other sorts of musings I've shared in this space.  This post is one of that kind.

I've been keeping an almost-daily journal for over 30 years now.  I kept a diary as a teen -- as most teen girls did back in the day -- but that's not what I mean.  In January of the year I was turning forty, I started to write in the style of Julia Cameron's "Morning Pages": three pages a day, stream of consiousness, first thing in the morning.  Nowadays it's more often a single page, sometimes two -- but it's still 'stream of consciousness', and still (usually) first thing in the morning.  It's where I'm "real" -- trying to get "stuff" out of my head and onto the page.  It helps to start the day in a better frame of mind, and removes some of the creative blocks to which we're all prone.

But by evening time, the "Demons" often return, and it's a battle once again to deal with them appropriately.  This morning I listed my particular "Demons" on the page, and thought I'd share them with you, in case you might have the same ones.  Knowing we're not alone in these battles can be a comfort and an encouragement.

ANGER... accompanies each and every one of those fears.
DOUBT...
LONGING...
LONELINESS...speaks for itself; and
GRIEF...about all of the above.
Recently, a couple of Anglican parishes with which I'm familiar posted about their up-coming "Blue Christmas" services.  I've never been to one of these -- for fear I couldn't bear it and would collapse completely in a weepy puddle.  My British heritage quakes at the thought of not 'bucking up' -- keeping calm and carrying on.
And most of the time in this space, that's what you see me doing.
But sometimes, as in the aftermath of a house fire just down the block on one of the darkest, coldest nights of the year, when I've tried to help by taking coffee to the first responders, helmets and protective suits glazed with ice, huddling in the 'shelter truck' -- when I was helped by only one other near neighbour, who owns the local cafe, who went to her shop and brought back more coffee, hot chocolate, cookies and beefy snacks for them -- well...
Thinking about the poor soul, troubled by his own demons, estranged from family, soothed by alcohol, living rough in his own house until on that night his resources failed and it burned around his unconsious form...
The Demons come calling, trying to 'get' me too.  So I share these thoughts in this space, writing out the Demons to expose them to the clear light of day, and to the love and prayers of those who might be reading, and might be fighting the same ones -- and perhaps others -- too.
I cling to the hope that the Light -- symbolized by the candles for Hanukkah, Advent and Christmas -- really does shine in the darkness -- and the hope that the darkeness will never overcome it. 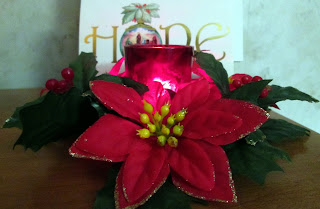 Much of what you said, I feel too. I'd add frustration to your list.
Stay safe, and may you find the light of the season.