This blog is aptly named: Life in the Making.  There's been a lot of that going on 'round here in the past month, as I've been getting gifts ready for Christmas.

There's been some studio work -- I'm ready to quilt a fourth piece for the Art in the Park Series -- but photos on that process will have to wait while I finish, finish, finish gifts!

And yes, there have been many finishes, to whit:

Knit socks and fingerless gloves for a friend in Montreal:

Fingerless mitts (by request) have been delivered to a friend in Calgary:

In my last post I showed you the simple cowl I'd made for my nephew.  Since then, I saw a photo of him on FB with a full beard on his chin -- and nary a hair on his head!  Now, he lives in Victoria, B.C., which has a mild climate, but seriously!  They do get snow there (even though they still have little idea what to do with it when it arrives), so it does get cold!

Thus, I promised him a hat.  I had enough yarn left from the cowl to start one -- and by a small miracle (and a deep stash dive!) I found a ball of similar yarn -- same composition, different producer -- in a dark grey, so here's his two-toned hat:

Earlier in November I showed a glimpse of the cowl I made for my nephew's partner.  Here it is, fully finished, buttons and all.  So pretty!

This year there's been far more stitching than knitting -- and things are getting finished there too.

The largest project was the Growth Chart, to which I've referred in several posts since I began to stitch the pattern in July.  Last week I finished it -- fully finished it, including a hanging sleeve and label -- and mailed it off to the recipient in Calgary:

I only hope it's liked, hung and enjoyed!

This week I fully finished the pieces for my son and his partner, too.  (I can share these here because to my knowledge they don't read my blog!)  I decided to try to find a frame for my son's "Quaker du Japon" from Jardin Prive -- and lucked out at the same local vintage shop from which I got one before.  I needed one that was 10" square -- not an easy find -- but there it was!  It was a slender frame with a gold 'metallic' finish, and included glass.  In it was a very pretty little piece of unsigned, undated, unlabelled cross stitch.  I've managed to rescue that, wash and press it, and will show you a photo once I figure out what I want to do with it!

I had to take the photo at a slight angle to avoid glare from my living room windows...and I wanted my initials to show above the frame so the piece sits right up at the top of the frame, but there you have it!

As for his partner's piece, "Lick the Bowl" -- I turned it into a journal cover.  I'm told she likes to bake, so I thought she might use this for favourite recipes... 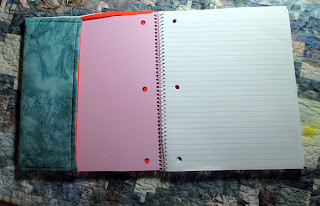 I lined it with batting and quilted the back (not shown) to give it more 'body'.  The cover was a tight fit, but it works!

I've finished another tiny stitchy gift for a friend, but she reads this, so no photo at present!

Last but not least in the gift-of-stitching department: two small pillows yet to be made.  They're gifts for my 'grandcats' -- of which I have five: three with my daughter and 2 with my son.  No, there will NOT be catnip in these cushions!  They're merely for decorative snoozing!  Both are identical, and one is finished but not yet "fully":

Version II is currently under construction.  I've had to add in another black over-dyed floss, as I ran out of the 'Carriage Black' part-way through...

On the quilting front, the "Wabi Sabi" version of Magic Tiles that I've made for a certain young man is now quilted and has binding on 2 of it's four sides.  You can probably figure out what I'm going to work on this week! 😉

Meanwhile, Bonnie Hunter's started her latest Mystery -- I'm saving the patterns.  And...I've started a new litte throw quilt, a gift for an ailing neighbour.  This one is a collection of 9 traditional blocks, kitted up as a Block of the Month from the Thimbleberries Club back in...2005!!!  Yes, I bought it back then.  There were actually two quilts in the program: "Sunrise" and "Sunset".  I made the "Sunrise" quilt several years ago and gave it to my neighbours here for Xmas (2014!)  It was done in typical Thimbleberries colours, but in lighter tones to reflect the theme.

It's time for "Sunset".  This neighbour is a fellow, so the darker prints provided for this one suit a more masculine aesthetic.  I've finished four blocks, each of which will measure about 10" in the quilt:

And I've cut the pieces to start the fifth:

The last block is really four of the same, to make a 9-patch, and then there's sashing and at least 3 borders.  It'll finish at about 60" square, so I should be able to quilt it myself.  I quilted "Sunrise" by hand but this one will be done on my machine, and fairly simply.
That pretty much sums up my month!  The snow is flying on and off today and the wind's been roaring around like a wounded lion since last evening, so it's a good day to stay inside and...make!
I'll probably not post again until after Christmas.  Hanukkah begins at sundown tomorrow evening, so I need to get out my menorah and ensure it's ready to go; our family celebrates both holidays, given that my late DH was Jewish. I'll be joining my kids in Edmonton on Christmas Eve (through Boxing Day), so it will be a double celebration together for the first time in some years.
On that note, Gentle Readers, I wish you all safe, happy, fun-filled times with friends and/or family over the next several weeks, and leave you with the link to Nina-Marie's Off the Wall Friday.  I hope her holidays are especially merry and bright, because she does so much to keep our little community connected!
Thanks for stopping by... a bientot!
🌲🌟 🌲🌟 🌲🌟 🌲🌟 🌲🌟 🌲

You have a lot of finishes. All will be enjoyed by the recipients, I am sure.

Have a safe trip ND enjoy your family time.

I am impressed with how much you've gotten done. And they all look lovely.