It's been another challenging year.  At least, that's the sense I get from reading the blog and Facebook posts of others, and from the YouTube broadcasts I've been watching -- and that's not just the newscasts, either.

The globe as a whole is still trying to come to grips with Covid variants, other respiratory viruses, war (especially sourced by Russia, but rumbling between Croatia and Serbia), persecution (Iran, Russia), climate change, and the continued rise of far-right, often downright fascist, leadership in politics.  Sheesh!

I continue to take refuge in working with my hands.  The Christmas gifts for friends and family were a hit, as far as I can tell, though I've not heard from a couple of the recipients (I'm not holding my breath on that front, either).

I recently sent off a cute little thing, just for fun, to a friend whose birthday is this weekend.  She might even get it today if Canada Post is working properly!  It's a "small" that reflects our mutual interests -- at least in part!

I stuffed it with some wool batting, torn into pieces to make it fluffier, and backed it with appropriately-themed fabric from my stash.

I finally did up the December mini-bouquet -- the last of Jeannette Douglas' free patterns that were published on her website monthly, starting in January.  They'll be there till tomorrow (end of day, December 31)...so if you've missed 'em and want 'em...go HERE ASAP!

Here's what the last one looks like -- so pretty! 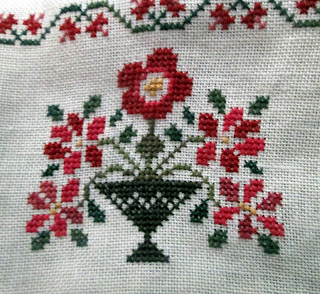 I still have the outside border to finish, but the inner, horizontal borders are all in place between the rows of motifs.  It's been fun to stitch these -- little rays of sunshine each month!

On Christmas Eve I started a new sampler, in memory of my cousin Margo Davison de Martinez of Seville, who died last month at age 80.  I saw her last when my family visited hers in 1992, and have very fond memories of that time.  She'd moved to Spain almost 30 years before that when she married a Spaniard -- a dear man who died a couple of years ago.  We're 10 years apart in age, so my visit to Spain when she was 50 and I was turning 40, was the first time we really communicated as adults (I was 12 when she married and moved away).  I have very special memories of that visit.

This is a Spanish sampler entitled Bernarda Bellon 1838, reproduced by Birgit of The Wishing Thorn.  It's done on 36-count Antique White Edinburgh from Zweigart, and I'm using the called-for DMC cotton floss, 1 strand over 2:

As you can see, it's very pastel, and will be pretty and delicate when finished.  I'll be sending it east to Margo's younger sister in Montreal, who's expressed a desire to have it.

The cross-stitch community seems to be forever coming up with ways to celebrate seasons and occasions (to whit: my Christmas Eve start), and New Year's Eve will be no different!  There are a couple of young women who've come up with a "12 x 12" project -- twelve starts in 12 hours on December 31, from 12 noon to 12 midnight.  One of the originators is Kea Bee, a stitcher and quilter, who has a FlossTube broadcast and is on Instagram.  She explains the process on her FlossTube here.  It's evolved into two streams: 12 starts or 12 new starts, and there will be a series of live visits on Instagram.

I'm not active on Instagram, but have decided to follow along in spirit -- mainly working on WIPS.  I don't have 12, but I can work on the ones I do have on a rotating basis.  One will be that border on the mini-bouquet, one will be "Bernarda Bellon 1838", one will be "Ruth Gibb 1882" that's about 1/2-finished.  I also have a couple of Blackbird designs in process, and my "Ann Turtle" sampler that I started for Sampler September.

I do have one new start I want to make: a four-seasons kit -- "Everchanging Seasons" by Elsa Williams, which I bought in another life! LOL!  It's now only available on the secondary market, as far as I can tell, but it's very pretty.  I came across it in my stash earlier this year and decided to wait until winter so I could start it on the left-side of the fabric: 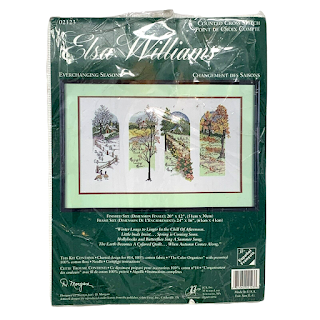 The kit comes with 14-count aida fabric in white, which I'm going to use, as well as all the floss, numbered, in a floss organizer.  I've prepped the fabric (zig-zagged the edges) and am ready to go!

Now that the Christmas knitting is past for this year, I've turned again to sweaters that I started some time back.  Yesterday I finished my Tulip II -- and will post a photo before too long.  I'm wearing it, and don't do "selfies" that are of any quality, so, patience, my friends!

You see, Santa spent Christmas Day sending me into paroxysms of laughter by dropping off packages of yarn -- they just showed up like magic, all day long!  So despite my diligent efforts to reduce my stash, it has now been increased by these items:

And then...there's this unlabelled mystery yarn.  The photos show just a single skein of each of two colours, but read the captions...😆

What the heck is it made of?  It's a very crisp, rustic yarn.  I took a match to one end -- twice -- and got a brief flame which self-extinguished, producing a bit of ash and a tiny, hard end -- but not the typical 'bead' you get when burning 100% acrylic.

I knit a swatch of the khaki-heathered colour (top photo): 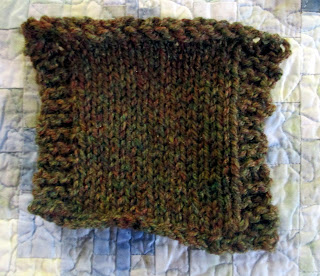 I washed it by hand with a hair conditioner rinse, and it softened up somewhat.  It didn't really change much in size.

Then I decided to throw it in the laundry with my socks, in a net bag, using eco-friendly detergent in a top-loading washer, on a warm wash with a cold rinse.  When it came out -- still damp -- it measured 4.75" W x 4.75" L, but hadn't softened up much more.

Throwing caution to the wind, I threw it in the dryer on my 'Permanent Press/Easy Care' cycle.  It curled up, and appeared to have felted ever so slightly.  It still had the same 'hand' (softer than when knit but unchanged from the hand-wash), and still had beautiful stitch definition.  It now measured 4.5" x 4.625" (i.e., almost square).

I'm guessing it's some sort of acrylic-wool blend -- based on the ash when burned and the very slight felt-like halo after the dryer experience.  It's definitely for outer wear, so will probably become a cabled pullover or cardigan.

As for the Condon's wool, it's much softer and will make up nicely into a hap (shawl).  I have a skein of cream in the 2-ply Fine weight, plus some Briggs & Little Regal and Heritage that might complement all those browns and that pumpkin colour.  Time will tell!

On the quilting front...I've finished the Thimbleberries "Sunset" top that I mentioned in my mid-December post.  It measures about 60" square before quilting, and is just about the largest size I can manage to machine quilt on my own.  Sandwiching and quilting will likely start next week. 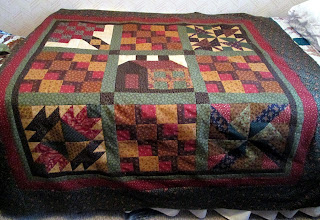 Just before Xmas I got word from the Revelstoke Visual Arts Centre that the Art in the Park exhibit would begin in March instead of the end of January -- so I breathed a sigh of relief!  The extra time means I don't have to stress about getting my pieces finished in the next 2 weeks.  I have four now, all nearing completion.  It's all come down to the hand-work.

The fourth one I quilted up just before Christmas -- amazing myself at my thread-sketching over traced images from photos I'd taken at the Illecillewaet Trailhead in July, as well as an adaptation of a historical photo I found online:

The quilted vignettes were inspired by what I saw at the Trailhead, by the history I found there, and by the lyrics of Gordon Lightfoot's Canadian Railroad Trilogy:

I've managed to turn under the edges of the backing so that they don't show; I wanted to allow the cutwork embroidery on the vintage tea cloth to add to the sense of history: the posh CPR hotel for the wealthy, that was abandoned and dismantled when the railroad was re-routed to a safer route and the hotels in Banff and Lake Louise became the more popular places for city folks to stay, skiing and hiking in the surrounding mountains.
I wanted the rusted linen strips to evoke the rails; the quilting of the background is of straight lines, intersecting like tracks.
I think of the four pieces I've created for this project, this one is my favourite.
And so it goes.
A year or so ago I chose "perspective" as my 'Word of the Year' for 2022; it's been tough trying to keep a steady, stable perspective for these last 12 months.  I'm not sure 2023 will be any easier.
But dear friends bought me a beautiful textile art and prose   book for Christmas.  I've taken to savouring it a wee bit each   morning in my pondering/journalling/prayer time.  I've   decided to let the author's words on creativity and life wash   over me daily, and not single out a particular word or phrase   for 2023.
I'm just going to let it be.
And on that note, Gentle Readers, I'm going to leave you with, as usual, a connection to Nina-Marie's Off the Wall Friday -- wherein she has a Big Idea for 2023, inspiring us all once again to leap into creativity and have fun.
Best wishes to all of you for a Happy New Year -- bonne annee a tous!

How you manage to keep track of so many projects, Margaret, I'll never know. However, I do understand the inclination when life feels tough, create and experiment/play. I was fascinated by all you did to determine the identity of the mystery yarn.

What a lovely post and beautiful gifts, celebrating that you are well-loved!!! Happy New Year, Marg... and I especially love your piece that is ready for Exhibition...