It's been a bit 'up and down' for me here since I last posted about my making (i.e., before the Gallery visit and the 'Follow' information -- which I hope, by the way, is working out for those who've chosen it).

(Can I ask a favour?  This is a long post...but please don't skim.  Read it in bits, if you must; think of it as a short story that needs reading, even if read over time.  Thanks!)

I finished up the binding on "Grassy Creek", washed it and packed it to deliver to Susan, the intended recipient -- her mother, Joan, was my dear friend who died at 89 in January 2020 and gave me several tubs of fabric (!) -- most of which were the source for this quilt.

Here it is in the glorious late October sunshine -- front: 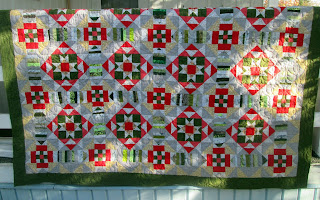 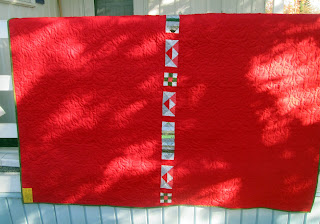 And a detail of the quilting on the back... 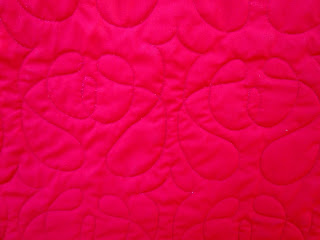 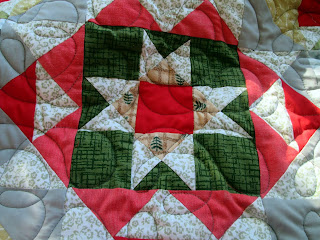 My long-arm quilter, Sylvia Sawyer of Woodwind Long-arm Quilting -- up Lakebend Road north of Mirror, Alberta, on the way to Bashaw* -- is simply the best!  Her prices are reasonable, and she's got an eye for thread colour and quilting patterns -- whether custom or pantograph.  She didn't bat an eye when I told her that there was a lot of polyester (including all of the back!!) and poly-cotton in this quilt.  Joan, it would appear, was the Queen of Polyester!  😉😆
I won't go into it here, but after no reply from the recipient to an e-mail and a voice mail, and finding her car at home but no-one there (not even the dog!) -- and a couple of panicky phone calls -- I found out she was in hospital -- not with COVID but something equally serious.  As of a couple of days ago, she is doing much better, and is expected home in the next week.  I've been checking her house, watering the plants and collecting her mail.  She'll get the quilt when she gets home.
Just one of the Ups and Downs -- locally.
Others? A friend who -- thank goodness! -- is finally getting much needed surgery this coming week (even consultations were previously postponed due to COVID Overwhelm!)  And...another whose surgery was postponed but will happen soon.  And...another whose son was in a major accident and is finally home -- but will need care for a significant period of time.  And...another whose cancer has returned for the ??th time and is not doing well.
In Canada, we marked the National Day for Truth and Reconciliation (the first of what will be an annual Federal statutory holiday) at the end of September.  I've been taking an online course entitled Indigenous Canada -- through the University of Albert and Coursera.  It's not an easy road, and I've mixed feelings about it, coming from European ancestry -- but from farmers and green-grocers who settled in Quebec in the mid-eighteen-twenties (my father's family) and a good 70+ years later (my mother's family)...with no idea as to what was really going on.  They say "the road to hell is paved with good intentions" and maybe that's true, but what I'm learning was that there were many whose "good intentions" weren't good at all.  That said, there was a great deal of misinterpretation, "fake news" in today's parlance -- and racism and much more re: faith, world-view, and misunderstanding...the toll it takes on the student learning this late in life is...hard.
On the World Stage, I've been taking in what's happening with COVID in the province, the country and around the globe -- for example: our Premier's refusal to send more than 2 delegates -- none directly from his government -- to the COP26 summit, even though our province is a major player in the oil & gas industry (the corporations involved *did* participate and are part of trying to find the best ways to create energy without fossil fuels)...
I've decided The Time Has Come for me to do two things.  The first is to acknowledge what my sampler, embroidered last year, says:

And the second?  With the first in mind -- is to officially launch the "Out of the Landfill Project".
Say what?
I've been working for some months now -- maybe since COVID appeared -- and maybe even before that -- with fabric and yarn scraps, buying less and less, except when specific gifts or commissions required it.  My piece for SAQA's "Season After Season" -- a rarely exhibited Global exhibit -- was made entirely from stash, as have most of the Bonnie Hunter Mystery quilts I've created.

But now...I'm taking this up in earnest.  I'm not only making more Socks from Stash, but also using stash to make other knitted gifts and quilted throws and comfort blankets.
I'm even recycling my batting.  I've spent a few hours this week creating what I call "Frankenbatting".  Here are some pieces lying out on my ironing board in the studio: 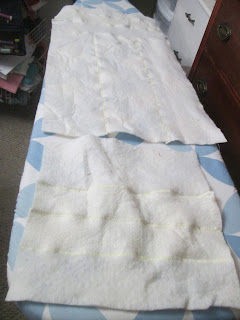 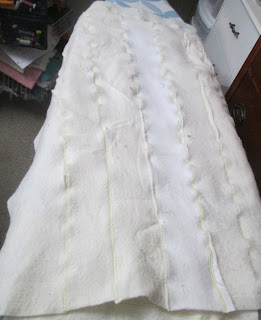 In addition to those (which may still have more added to make them workable), I've finished one that's going to be sandwiched into a comfort quilt -- the top of which I made a while back, from scraps, of course!  (God bless Bonnie Hunter's "Scrap Users' System"!) 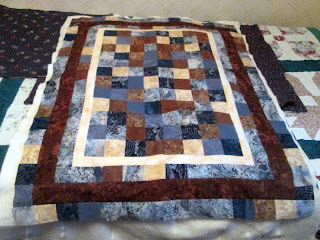 I washed the backing fabric earlier today and will be quilting it up soon -- adding it to the stack I hope to send to an organization in Lacombe that looks after youth -- including young single moms.
Some of the pieces are smaller, of course, and will be 'frankenbatted' together and used behind art quilts.
Speaking of which...
When you beat yourself up about what you "coulda, shoulda, woulda" done to try to Make the World a Better Place, it's reassuring to know that there is a source of forgiveness.
Well, let's just say, that's the case in my particular faith practice -- acknowledging that it may not be in yours, and that some of you, dear Gentle Readers, may have a completely different view, and discount "faith practice" as so much poppycock! 😉
Regardless...I created this piece out of the shards of pieced crumbs from "Incarnation" (see above).  It needs to be mounted on a painted stretched canvas, which has just been purchased, but for now:

I was gratified to have it appreciated by a Facebook group to which I belong -- Artists in Canada Art -- gosh, I hope that link works I checked -- and fixed it, so it works now!!  I'm hopeful it will bring someone joy, somewhere, sometime.
I think that's enough for now...and so will link up with Nina-Marie's Off the Wall Friday, wherein she is celebrating piecing which, if you've read this far, you know I very much love!
A note to the knitters:  knitting continues. You know it keeps me sane.  There will be more about knitted items in the next post --  I promise!

*I told you, I live in the Middle of Nowhere in central Alberta! 😉

Wow. Marg... you have been so busy and working so hard over the years and now, the acceptance that your Sampler words are a perfect fix to overdoing and having way too much on your late - a blessing. Taking time for you and for the things and people you love the most - and family, always first - this is a big step, and HOORAY!

Me too... not just a sad song, but. I have been thinking a lot the past few weeks. I have to stop supporting the needs of quite so much - it is a bit of a 'contagious disease' that I send my pension dollars to everyone but ME most of the time...especially as an elder, I could use a little less "donation" and more "hang on". Especially when you are a loner in a home that has men/male dogs, and feeling a bit an outsider with youngsters all around in the studio like I have (that are MARVELOUS) but the 40/50 somethings just make me soooo tired. And no close connections to family far away!

So I am doing something else with SAQA - again - turned down a possible Board position - way too old for that. But I will work with Delores Miller on the Trunk Show project - it is a passion of mine. I am so sorry to miss Karen H. but we will have a new Grants member soon - see you Monday the 8th!

I cannot do everything, but I too can do something - Rock on dear friend!! You are loved!

I have this posted on my sewing room bulletin board "You can't help everyone but sometimes you can help someone". Very similar to your sentiment embroidered piece.

When I clean out closets I ask myself what that fabric could become. I'm at a loss for what to do with used "unmentionables".

What a blessing forgiveness is! Sometimes we make an effort with the best of intentions but sometimes things don't work out and we fail. I think it's so very important to forgive ourselves.
It's fun to see that others sew pieces of batting together, too. I used to sew them by hand and then tried overlapping pieces just slightly and sewing them on the machine. I haven't noticed any lumps in quilts with batting sewn that way. I'll keep doing it.
Your Grassy Creek is gorgeous!

Your Grassy Creek is so beautiful!!! I love BH's patterns, for using up scraps of all kinds.