In these parts, one can tell that we're moving ever closer to winter, especially as it's now past mid-October.  We often get snow around Hallowe'en.  There are fewer and fewer leaves on the trees, and the wind is brisk.  Time to hunker down.

Yesterday, I put the last of the yard and garden to bed, covering the purple trunk (a home for pots of flowers in the summer) and the storage bench, both of which are too large and/or heavy to move into my limited shed space.  The other bench is in the garden shed, along with the outdoor tables.

The last of the pruning has been done, the pruners cleaned, sharpened, oiled and stored.  The long hose has been drained and is in the shed; the water valve to the outdoor tap, shut off.  The snow shovel and the cord (for plugging in the car's battery in very cold weather) are within easy reach. 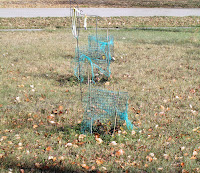 The baby Saskatoon bushes have been ringed by and covered with chicken wire and netting to keep the deer from snacking on their remaining leaves and branches. There's only one job left: to cover my apple saplings with burlap, as they are very young and susceptible to a variety of winter hazzards.

Indoors, all my hands want to do is knit.  This is, in part, a sign of how emotionally wobbly I've been for the last 20 months (at least).  The last time I was in this state -- with hands that refused to do much but knit -- was when my DH died in the summer of 2006.  Now, kntting's long had a reputation for helping with emotional angst and stress -- as has other repetitive handwork, such as cross-stitch, piecing and quilting.  Those of you who've followed this blog for it's almost-18-years journey will know that it's title started as "The Lady Who Knits on the Bus".  Knitting was the first craft I learned, and the one I've never stopped practicing.  It's immensely helpful now, even as I wobble along, sometimes muffing a joint on a circular needle, or misunderstanding a pattern.

"Why so wobbly?" you might ask.  It's the times...still.  And since my break-through case of COVID in late August, I seem to be even more wary, feeling a bit more vulnerable.   At the Post Office here in town, at the hardware store in a nearby village...there continue to be folks (mainly men) who show up unmasked, with young clerks seemingly unable to enforce the store's requirement for customers to wear masks as our Province battles a 'fourth wave' of the virus, a wave so large that the Canadian Army and Red Cross and personnel from other provinces have had to come in and help in our hospitals.  All but the most essential surgeries have been postponed.  As of last Thursday (Oct. 14), while things were easing a bit, without extra surge beds and staff, our ICUs would have been at 163% capacity!

The respected realtor who helped me buy my "East Lawn" a couple of years ago was hospitalized this week with COVID-caused pneumonia; he's in his late fifties.  His wife is at home, also sick with it.  I've no idea of their vaccination status, given his line of work but still, it's a sad situation.  Case numbers in the County are so high that our parish church is closed again.  I'm back to recording hymns for it every other week -- but my voice is not the same since my COVID experience, and I still have a periodic harsh cough.  I don't have the range or timbre of voice I used to have -- and only hope it's temporary!

Everyone's on edge; the nearby public school is on alert/breakout status -- and tomorrow, when our Province's Chief Medical Officer of Health gives her next update, we may get a glimpse of the impact of our recent Thanksgiving holiday (October 10-11)...given that folks in these parts are still largely unvaccinated and very family-celebration oriented. 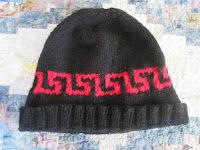 Blessedly, as winter moves in, I'm mindful that Christmas is coming; I'm immersed in projects.  I finished the toque for my son mentioned in my last post -- the "Ribbed Cuff Toque" from Sylvia Olsen's book, Knitting Stories  -- and I confess I'm not thrilled with it.  Even though I 'got gauge' for the 22" size, the thing seems awfully large! That said, the pattern is fine, and not hard to follow.  Rather, I'm thinking my "problem" might be the yarn.  The original pattern calls for wool, which I know wouldn't work for my son, given his schedule and the nature of his household.  One laundry "accident" and it would shrink to doll-sized!!  So...I chose a lovely acrylic -- Cascade Yarns "Anthem".  It's soft and squishy...perhaps a bit too squishy.  Certainly, it's not as firm and sturdy as a woolly wool would be!

What to do?!  I decided I'd give him the hat -- and another as well.  I dug out a "vintage" acrylic (some black Baycrest Sayelle given me by a neighbour who's down-sizing and clearing out this sort of thing) and cast on the Bankhead toque -- another pattern that calls for a crisp, sturdy wool.  But this time, being a "vintage" acrylic means that it's also 'crisper' and 'sturdier' than the soft, squish Anthem.  I'm again doing the 22" size, and have just finished the 3" twisted ribbing.  On to the hat body.  I think it's going to be much better -- but he'll have both and can wear what he wants!

While I finished the Xmas socks for my daughter at the end of August, I now have another pair to knit for her -- at her expense, as she's asked for them for a friend for Xmas.  The request was for autumnal colours, in the same pattern I'd used for a pair for my daughter a few years ago.  The yarn, I have to say, is glorious!  It's another from Gathering Yarn -- a company that specializes in limited batches of yarn that's hand-dyed in B.C.  This time it's "The Harvest is Here Stock Lot/Mill End -- The Basics Sock", a wool/nylon blend: 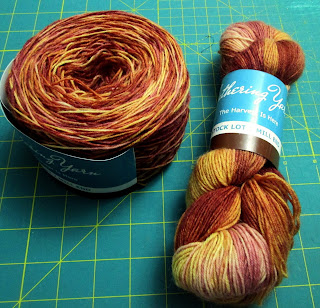 The pattern is "Hummingbird", designed by Sandi Rosner, and found in Clara Parkes' The Knitters Book of Socks. I've made it before, but...this time there's a new wrinkle.  The pattern's written for feet that are quite a bit smaller than those of the intended recipient!

I decided to go with 2.75 mm needles (instead of the 2.5 mm called for), and to cast on 72 stitches rather than the called-for 64.  That was fine for the ribbing but...the lace pattern in the socks is based on a 32-stitch repeat.  Um...right.  What to do with the extra 8 stitches?!  I decided at first to isolate them on the back of the sock, and decrease them once I'd knit the first 12 pattern rounds.  The recipient's desired leg length is 11" from the cast-on to the bottom of the heel, so I thought I could decrease two stitches every four rows but... 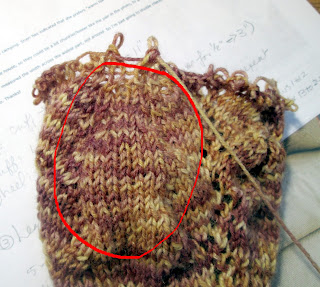 See that rather ugly bulge (circled)?  The result of too many decreases too close together!  Aaargh.  Back to the drawing board!  I frogged back to the cuff and started again.  It took me quite a while to get the math down in a way that my brain could manage it, because of the way the pattern is written, thus:
Uh, yeah.  I had 8 stitches to "lose" while, at the same time, building in some extra length by knitting an extrat "rows 13-24" set.  It meant I'd be spreading the decreases (four of them at 2 sts each) over 72 rounds -- one pair every 18th round.  It sounds straight-forward enough but with most of the rounds being repeats of rows 13 to 24...I ended up putting together a table.
I've now completed three of the four pair of decreases, and it's looking much better: 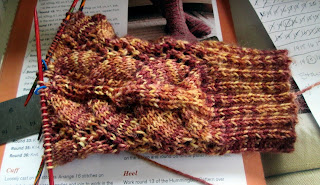 Yes, there's still a bit of a 'bulge' -- but it should block out and disappear when the socks are worn, in a way that wouldn't have happened if I'd gone with my earlier attempt.  Phew!  Onward!
And yes...I have done a bit of work on quilts.  "Grassy Creek" has its label and binding on two sides -- now needing to be hand-stitched on the back -- and my commissioned Rail Fence is finished.  It will be delivered on Wednesday, when my neighbour visits her sister, who is my client.  My neighbour really liked it, so she photographed it for my client -- and she's equally pleased.  Another "Phew!"...

And now, Gentle Readers, though I'm late to the party again, I'm linking this up to Nina Marie's Off the Wall Friday.  She took a painting class recently -- something outside the box for her -- and had great fun.  Sometimes 'tried and true' soothes the restless soul; sometimes 'something new' works equally well.  Whatever you're trying your hand at, hunker down and have a great week!

You have had so many things on your plate getting ready for the possible snow that could come along in weeks ahead and you do a masterful job at the small details and protection of your new plants and trees! Well done!

I know that the long-hauler differences in the post-Covid routine are keeping you in tow, but remember that you are strong and bold and will come through this! Shame on the community for being so truly oblivious to what they are doing ...so sad!

SAQA contacted me about being on the Board and I have declined with all good wishes as a Senior with few "big job" ideas - just as settling nicely into 'Seniordom' which means no long term, challenging three years terms. I will just enjoy continuing to do some committee work along the way. Thanks for your notation about my Journal article - that was something else... but I appreciate the honor of being there in print! My kids were impressed though I still have not received a print copy!

Be well and I need to get you to purchase a rigid heddle loom (I am an Ashford NZ weaving/spinning/yarns and beautiful roving/fibres dealer) and get WEAVING - that will be fun for new things for your home and family! EASY to learn.

Hope to see you online on Nov. 8th and we have one Application to chat bout - sending it along later today.

Take good care and know you are missed and loved a lot!
Bethany