Working with the Weather

In a land of fairly distinct seasons -- the longest of which seems to be winter -- the weather is a never-ending source of fascination and discussion.  When I have snow, I snow dye.

And, when I have hot sunshine, well...

Friday, July 28 was hot and sunny -- one of many such days, often very hot for this part of Canada, this summer thus far.  I decided that I really shouldn't waste any more of the heat, and set out some jars of silk fabric and merino fleece in acid dye, for solar dyeing.  While I have the book Teach Yourself Visually Hand-dyeing by Barbara Parry, I also pulled an online reference from "jazzturtle", which I found to be the perfect complement to the process.

Following their instructions, I managed to fill nine large glass mason jars (ones too large for the jam-making I do) with combinations of silk fabric in various weights and weaves, and clean, uncarded merino fleece purchased on the cheap at a fibre festival several years ago.

The acid dyes I own aren't new either.  A couple -- hot pink and an orange -- are from Jacquard.  They needed the acid (I used plain white vinegar) added to them.  The others are from Gaywool, and already include the acidifier/mordant.  I bought them -- yes, several years ago -- at a knitting/spinning retreat.

Knowing the older these dyes get, the less effective they can be, nonetheless I persisted, and put the jars out in the sun: 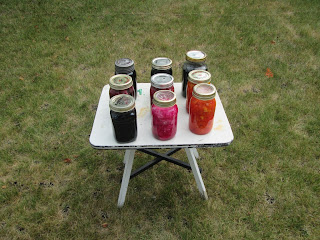 Typically, the weather almost immediately got partly cloudy and cooled off.  I alternated setting the jars under a black plastic garbage bag -- to attract and hold in the heat -- and leaving them out.  We had a few evenings with thunder storms and at least one day of rain.  I remained undeterred; I had time.  I left them out -- moving them from time to time for better sun advantage -- for a full week. (Remember, this is Central Alberta, Canada, where temps in the high twenties and low thirties Celsius are rare, and don't last all day.  It cools off at night here -- and sometimes even before sundown, and doesn't get past the teens till well after sunrise.)

Last Friday, I decided it was time to reel them in.  The liquid in the pink and the orange jars (Jacquard dye) was almost clear, so I knew they'd be "done".  The deep reds and red-browns and brown-blacks?  Not so much.  I rotated ALL the jars through a 30-minute steam bath in a large kettle...then rinsed them in Synthrapol...and laid/hung them out to dry.  I must say, I'm pleased with the results!


I plan to use the 'earth tone' fleece largely in needle-felting projects; the brights I hope to tease out and try to spin them.  We'll see...because there are a great many "short cuts" in that fleece.  That's why it was so inexpensive in the first place!

As for the fabric...it will make its way gradually into various art pieces, as the Muse leads.

The idea is to use the dyes and the fabric and the fleece, not treat it as 'too precious' and thus hold onto it.  Life's too short not to play with these materials while I can!

Linking up to WIP Wednesday on the Needle and Thread Network -- for the first time in ages -- and wishing you all a lovely rest of the week!

Looks great, Margaret. LOL, if you were in Kelowna there would be no worries about clouds or cool weather...I am finally going to get off my rear and hit the dye studio starting this weekend.

Hi Margaret! When you say you rotated the jars through the steam bath, did you mean the contents of the jars, or the full jars themselves, in a process similar to canning? It's been quite awhile since I dyed any silk or wool. At that time, I used a microwave, and was terrified throughout the whole process.
Pat F in Winnipeg