I feel as though my feet have barely touched the ground in the past few weeks, what with working some extra hours at the shop; travelling out to Sylvan Lake to monitor my sister's garden and then visit her there while she was on holiday; tending to my burgeoning raspberry patch; and working on various projects.  Often I've thought of updating this blog to share what's been going on, but by the end of each day I've been too tired to put posts together.

I finally decided I'd best empty the camera...and share with you "what I've done on my summer vacation"!

Every summer I weed and water my sister's garden in June, while she's tied up at work (read: hospitality industry, Calgary Stampede...):

This year I found a great pattern at the Central Alberta Quilt Show in March, and "shopped" my stash to suit the colours of my sister's "casa" at the lake: 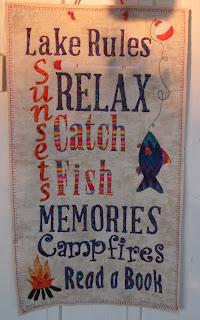 I've been assembling throw-sized tops to send to B.C. for quilting and giving away to victims of the wild-fires there.

I still have one more Rail Fence from the same fabric (it was a kit of fat quarters given me a few years ago by an elderly friend who didn't want to make it up), which will be a crib-sized top once I get some more navy for borders!

I've been putting up Saskatoon berries -- some of which I picked locally and some of which were given me -- and raspberries from my own garden -- in jam: 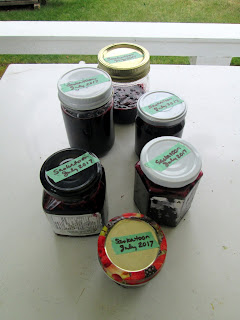 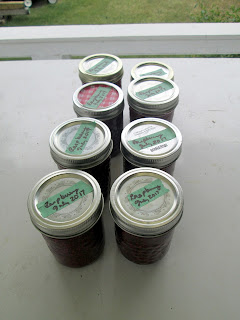 I travelled to Canmore (3+ hours each way -- there was construction!) to meet with a SAQA friend and colleague from California, Susan who, with her husband, was finishing a week of bicycle touring in Banff, Canmore and Lake Louise.  We'd never met in person, so we had a very special lunch and are both thankful to her DH for giving us time together! 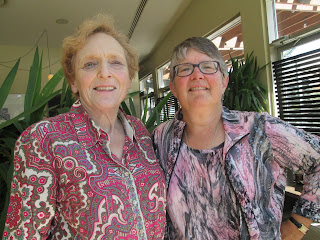 I look a little...ahem...snooty in this photo, don't I?!  Have no idea...but while the other photo her DH took with my camera showed me in a better light, Susan had her eyes closed -- so I had to go with this one! LOL!

I also finished some knitting projects, such as this commission:


And this shawl for a good friend...shhhhh...she doesn't know about it!


And just yesterday, this wee hat in left-over "Oilers" yarn, for a tot who's having a first birthday soon:


Also yesterday, this project -- which I began in May 2016 -- for another wee tot, whose first birthday she shares with my 65th...


Today...I'm off to the shop to fill in for our manager, who's gone to a conference.  It's often quiet on a Tuesday, but never fear...I've begun a new knitting project... 😉

You have been busy! Your knitting is beautiful! I have never finished something so fine.

You finished the stocking! It looks beautiful.

Glad to see all your projects and travel. So nice to be able to enjoy the outside!