It's been well over a month since my sewdio work focused on art.  Not that it's been far from my brain; it hasn't.  I still have ideas swirling around in there, but my hands have wanted no part of those.


While this is on the design wall...

These are ready to go under the needle...

And these have already been assembled...

They're going to come together with a stack of waiting rectangles, like this...

Yes, that's 2009.  That's how long that faded purple sticky note has book-marked that pattern...and pretty much how long I've had most of that fabric -- with a sewing-related theme -- just waiting to be put into use.  Recently at lunch, my friend C gave me two fat quarters of similar fabric -- in a completely different colour palate -- and I was spurred to add it to the stack and get going on (Heaven forfend!) a quilt pour moi.  Heaven also only knows how long it will take for me to get it quilted (it will likely be large enough that I don't want to do it myself)...but the top is far enough along now that it should be finished this fall.

However, I was in Utilitarian Mode long before I started to put this one together.  I finished the third quilt top (crib size) for the B.C. fire effort... 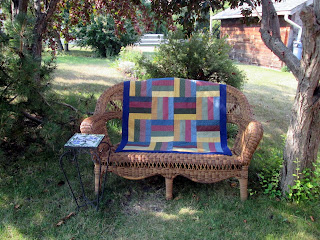 Lest you think, "I've seen this before!"...well, it's the same fabric I used for a throw-sized top.  Originally, the kit from which they came called for it to be all one quilt...but I thought it might be more useful in two smaller ones instead.

All three tops were boxed up and sent to Coleen in Peachland, B.C. on Wednesday.  Now there's a fire threatening nearby Kelowna...so I hope she is safe and gets the package in good order...so that she isn't interrupted in this good work for the thousands displaced earlier this summer.

Also mailed out: the wee "Oilers" toque and a pair of "wristlets" -- fingerless gloves -- for the up-coming 65th birthday of a friend from high school.

A knitting UFO was crossed off yesterday, too, when I finished a side-ways knit garter-stitch (knit every row) cardigan I began in 2012.  I dug it out in June, figuring it would be ideal to wear on my up-coming quilters' tour of Scotland in September.  I started where I'd left off...and soon went off the rails.  It's shaped with short rows, using 3 stitch markers...but which was Marker 1? 2? 3?  I thought I knew -- till I finished the back and found the neckline had become woefully misshapen.  Sigh.  I turned to Ravelry for help, and sure enough, there was a 'help group' for the pattern.  One gal in particular set me straight.  I frogged back to where I thought I'd begun to go astray, and started again.


The pattern calls for four buttons, smaller than shown, but I wanted to show off this one I bought years ago at my then-favourite LYS in Calgary, The Knitting Room.

I found out earlier this week that a friend from university days and her hubby became grandparents for the first time at the end of July...so now a wee pair of socks from some cotton-blend stash yarn is on the needles, and will likely go out later this week.  I started them last evening in the Outdoor Sewdio.  It got a bit cool, so I put on my new cardi.  Perfect!

So there you have it, Gentle Readers: several weeks spent satisfying a hankering to create beauty, but not the kind one puts on one's walls.  It seems to come from a combination of wanting to Use Stuff Up, to Keep Hands Busy, to Enter the Creative Zone without too much strain on the brain, and to Give Something to Others at a time when there is great chaos, anxiety and turmoil in the world.

All I know is, these projects have kept my hands touching textiles, fulfilling a purpose, finding meaning, and creating calm -- at least, in my wee corner of the world.  They've soothed my soul even as the summer sped by, and enabled me to spend time reflecting on the year ahead -- but that's a subject for another post!

Today I'm off to meet Mali Doktor (Vargas) the young woman who is the current President of the Alberta Society of Artists...and who's going to give me a 'board' on which to create something for an ASA fund-raiser.  It's my first contribution to the organization since I became an Associate Member several months ago, and really the easiest and most practical way for me to 'volunteer' for a group that is based a good 2 1/2 hours' drive southeast of here.  I've never worked with 'board' before, though, so it'll also be a learning experience.  Who knows?  I might just find another avenue for my textile ideas!

Monday I expect to drive over to Stettler to get an estimate on some floater frames from Andrea at the Cabinet of Curiosities (she's the gal who cuts most of the mats for my minis)...

So you see?  Art's been happening, is happening, and will happen here in the sewdio for the foreseeable future (God willing!)

Linking this up to Nina Marie's Off the Wall Friday -- and wishing you all a wonderful weekend!
Posted by Margaret at 8:13 am