Underneath the snow pack -- at least, on the roads -- is a layer of ice, so...I'm home, effectively snowed in.  I don't make any $$ when I'm not at work, but I figure it's worth my life to stay home and stitch.

Yesterday I worked on two projects.

First I finished the "bird-house mini" I started some time ago, before I was overtaken with the urge to make "Snowy Evening".  :-)  I've made several of these bird-house pieces in several seasons...but the winter one(s) seem to be favourites.  To satisfy Gracie's request for two winter scenes, I decided I'd better get this one done!

As I stitched, I listened/watched several videos on YouTube, mostly about making art. I particularly enjoyed revisiting episodes of "Craft in America" and the "Art City: Simplicity" film featuring Agnes Martin, Amy Adler, Joan Snyder, Richard Tuttle and others.  It dawned on me that I'd begun this piece with a certain level of "same old, same old"...but somewhere through the afternoon that feeling dropped away and I became simply, quietly, gently, a maker*.


Thus the change in my blog title, at least for a little while.

I took my EBMC piece with me into the evening.  I'd spent part of Sunday on it too -- daring to quilt the panels...then slash them part-way: 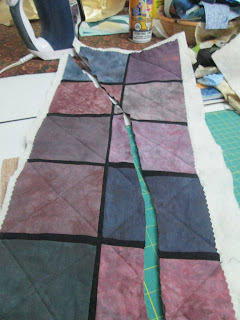 Next, I trimmed back the excess batting along the edges of the slit: 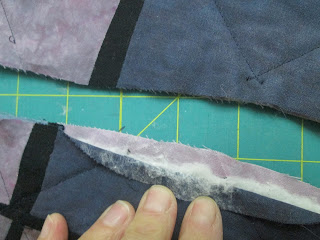 Inserting a bias strip of gold lame into the opening, I pinned it heavily and sewed down one side and then the other -- et voila!  When I held it up to the light...


To finish the piece, I bound the sides: 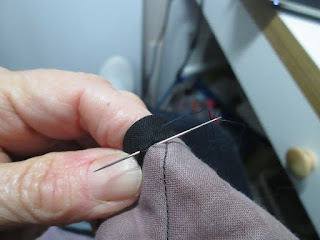 And added "stone" to the top and bottom...for the window was inspired (as you may recall) by those in buildings in that photo from York, UK provided by EB for this assignment. 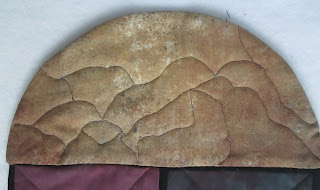 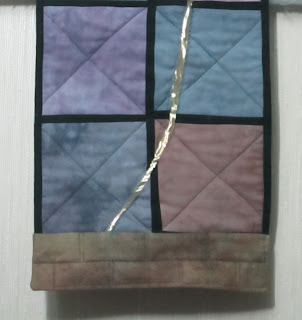 I haven't put a sleeve on it yet, so to send photos of it to EB, I had to lay it on my design wall, first one side...

And then the other...

When ready, I will hang it in a window.

Linking up with WIP Wednesday on The Needle and Thread Network.  Before I go a-shovelling, I'm going to knit, just a bit...
Posted by Margaret at 12:31 pm

I love the quote. I need to remember that, on those days when I feel stuck.
I love the window.

I like the new name on the blog, it suits you and what you do. Speaking of which, I've been sitting back and thoroughly enjoying the progression of your EB assignment. I held my breathe when you slashed the piece but it was definitely worth it. I adore "No One Home". I think it's the red that really set the whole piece off.

Your little winter bird house is super cute! Love it! Were you nervous to make that cut in your Light Prevails?

Very nice work! I love the bird house!!!! And the window is lovely.

Thanks for the Art City Simplicity link. I'm going to watch/listen when I'm stitching this evening. Great looking projects.

Love what you've done with the window and your bird house is lovely too.

What a great couple of projects!

What you've done with the window and the lame-very cool! I adore the bird house quilt-just so lovely.

I love the window, Margaret. Just the right touch to add the cut and lame. And, of course, I love your winter scenes. Hope your roads have improved by now.