In my last post, I talked about a Japanese-themed project on which I'm working.  Today I sketched out an enlarged design and auditioned fabrics for a large (18" x 18" finished) central medallion: 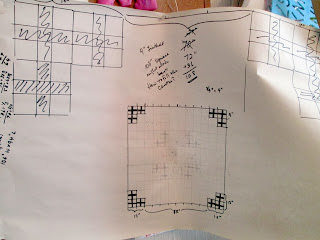 The small diagram in the centre is actually a miniature diagram of the whole piece.  The pieced blocks will frame as-yet-unplanned blocks in the four corners.  There will be a large central applique block, flanked on each side by four other applique blocks.  At this point, the arms of the cross that come into this intersection aren't designed, but I'm getting a feel for how I want this to turn out.

I also cut fabric (all from stash!) for a sample of the central medallion block.  To create this I had to double the size of the design from Susan Briscoe's book.  I'm one of these people who can't really envision what it will look like till I make it, so I now have the background and two parts of the motif cut out and prepped for applique: 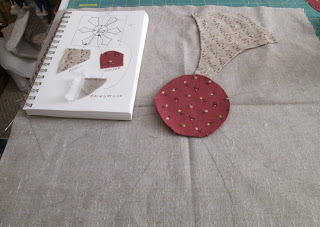 In the end there will be six "petals" around the circular the centre.  I think my applique skills are up to the task, so will work on this of an evening -- probably watching The Quilt Show or an episode of DesignMatters TV.  :-)

Coincidentally (serendipitously?) I've been aided in this more formal design process by a kit I won as a door prize at a Heritage Park Quilt Festival dinner a few years back.  It too involves a central medallion.  Though what I'm doing with the Japanese-themed quilt isn't strictly 'medallion-style', I thought I would take out this kit and assemble the top, just as a learning experience.  It has a real "country" feel to it, but is a bit on the dark side for my decor, so I expect it will end up being given away.  In the meanwhile, though, this 70" square (!) piece is teaching me method, design, colour theory (value and contrast) -- and will culminate in being something I will try to quilt myself using the "Medallion Quilt" section of my trusty class with Ann Petersen, "How to Quilt Large Quilts on a Small Machine".

Yesterday I washed all the fabrics except the background -- which is cream-coloured and will have to wait for a "white wash" day.  Today, I cut them out and organized them in a chart, per the instructions: 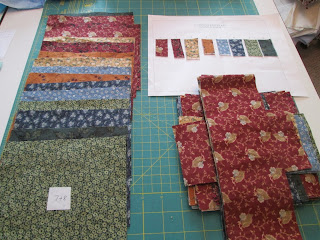 The blocks on the left are paired in combinations, in preparation for constructing a series of half-square triangles.  The pieces on the right have been "set aside for later".  :-)  The paper at the top is the chart I used to number each fabric - light/dark, light/dark, light/dark...

My online class with Pamela Allen, "About Contrast", begins tomorrow.  Who knows how useful this piece will become?  That, and the fact that the next 15 x 15 theme is "Contrast", and I'm all set!

Linking up to WIP Wednesday over at The Needle and Thread Network...why don't you join me and see what other Canadian quilters are up to?

I enjoyed reading your design process. Beautiful material. And about washing the background fabric. My applique teacher suggested that we don't wash the background fabric because it makes in easier to applique onto...but to wash the applique fabric...Personally, I was everything that comes into my stash. Happy Quilting!

It looks like a good plan but like you, I am a visual personality and I need to see it in full technicolour to see how it is progressing. My current applique background isn't washed as 'they' say that markings and soiling from hands washes off better.

You're really busy and good prepared. Love to see how this will turn out. Good luck and happy quilting.