There's so much going on in my head and through my hands these days that on occasion I feel like I'm actually vibrating with the delight of it, and I can't keep up.

January 15 I got the first lesson in the online class I'm taking, "About Contrast" with Pamela Allen.  Lesson 1 involves a study of low contrast, or monochromatic work, which coincided with a piece I had in mind to do based on a recent walk one afternoon past a stand of young trees near my home.  Yesterday I expressed it in a miniature:

And for V from Sweden, a photo of the back: 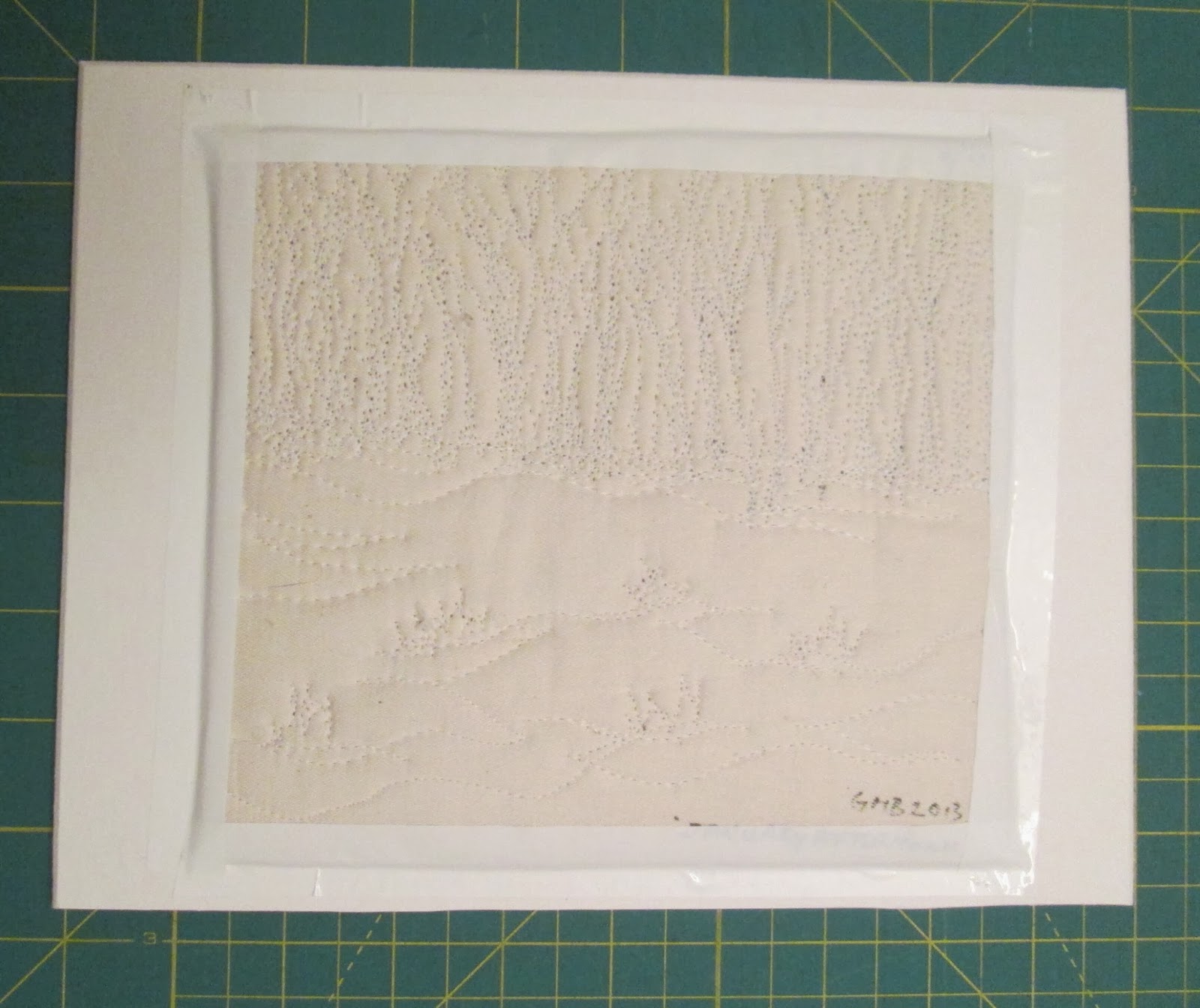 I tend to leave the backs of my miniatures uncovered; people have remarked on how they like to see the stitching.  :-)

In addition to class work (which I hope to send off to one of the Galleries soon), I assembled the first batch of half-square triangles for the medallion sampler mentioned in my last post.

And I've done a bit more snow-dyeing -- using the soda ash this time, with much better results -- and rusting...and I unwrapped the last piece of silk I had percolating in my back room, in what little sunshine we've had.

It really looks more green and less grey than the photo shows...I didn't save any of the rusted or wrapped fabric.  These pieces will work their way into new work in due time.  :-)

The rusted work spurred me to dig out three small rusted handkerchiefs I'd dampened, rolled up and stored in the refrigerator (rather like linens prepared for ironing) some months ago.  I decided it was time to bring them to life in another "statement" piece I've had rolling around in my head for a year or more now.

The piece was inspired by reading -- Reverence: Renewing a Forgotten Virtue, by Paul Woodruff -- for one, and Choosing Civility by P.M. Forni, for another.  The reading was inspired, as I recall, by pod-casts to which I listened...as far as I recall...but the actual sources elude me.  Some of the thoughts were stirred up by distinct incivility encountered largely online and through the news media rather than by direct witness.

It's not uncommon for "older generations" (and yes, at 61, I am now part of one of those!) to decry the increasing lack of civility in the world -- especially in the West.  And while this is perhaps cliche, there is a kernel of truth to it -- taken as a whole, there is a great deal of cynicism, self-absorption, rowdiness, violence, pugilism, irreverence and downright rudeness in our culture.  It is one thing to spout "The Golden Rule"; it is quite another to try one's best to live it.

Woodruff's observations about reverence include but are not limited to our culture's current fixation on the fact that reverence has something to do with religion, and therefore is not valid in secular society.  He writes,

Reverence begins in a deep understanding of human limitations; from this grows the capacity to be in awe of whatever we believe lies outside our control -- God, truth, justice, nature, even death.  The capacity for awe, as it grows, brings with it the capacity for respecting fellow human beings, flaws and all.  This in turn fosters the ability to be ashamed when we show moral flaws exceeding the normal human allotment.*

His general point is that reverence is a virtue that has been eschewed in recent times because hubris has overtaken it; that is, we have come to believe that there are no human limitations, nothing is outside our control (despite evidence to the contrary), and that we aren't responsible for our actions.

Forni includes these in his description of civil behaviour:


I decided to use these three words -- attention, acknowledgment, and optimism -- to create a triptych to express my sense/impression of Deteriorating Civility (working title).  First I rusted three old, thin handkerchiefs; then, using Pitt (R) pens, I wrote one of these words on each.  Next, I further distressed the hankies with my needle-felter.  As a background, I am using a very worn quilt that I've cut into three sections, and have lightly painted with dilute gesso.  I have embroidery and stitching and more needle-felting to do to get the pieces together the way I want them to look -- definitely a work in progress, with no idea of a venue, but here's the first panel in progress on my design wall:

As for this afternoon, knitting and handwork are on the agenda.  I'm linking up to Nina Marie's Off the Wall Friday...see you there?

Hi, Margaret. This is such an interesting piece in part because the starting idea is so good (with which I agree, btw). Looking forward to seeing how this develops!
best, nadia

Nice rusted piece. "to others, of others..." This is the root of the problem. We have become such a selfish lot of people that we no longer care about others and hence we aren't polite. how sad!

Love your rusted piece and the meaning behind it. I agree fully with you.
Beautiful miniature and snow dye.
I am looking out for the next rusted pieces.

This latest piece, and the inspiration and story behind it, are fantastic. It certainly resonates with my 60-something bones. Looking forward to seeing where you take it ... wonderful idea.

Thanks for sharing,
Jennifer

Those are three words we could all do with keeping in mind! Thanks for sharing your thinking towards this piece.