The Gift of a Day...and a Day of Gifts

Yesterday I woke to snow and blowing snow, with drifting on the highways.  There was no way I was going to be able to get into Lacombe for my "usual Monday".  I made a phone call or two and then settled in to enjoy it.

Since finishing my 15 x 15 piece for the "Rhythms" theme, I've begun work on a couple of large projects, both of which I can't say much about at present -- but they began yesterday in the sewdio.

The first is going to use a significant portion of my stash of muted fabrics, many from Japan.  The design source is Susan Briscoe's Japanese Taupe Quilts, which I bought a few years ago at a local quilt show.  I've had this project in mind ever since and have finally settled down to design it...even setting aside a special sketchbook.

Given the size of the piece and the finished size of the blocks, I mulled it over some more, and late last evening came up with a larger lay-out.  The blocks with the crosses are from the pattern I've already made.  There will be more blocks and central motif, rather like a medallion. 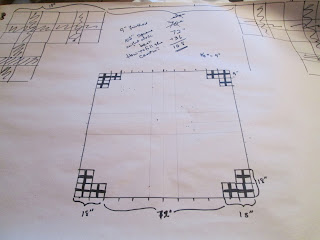 By late morning the snow had stopped, and the sun was out, but the roads were still a mess.  I got in a shovelling work out and then went to the Post Office, where I found these awaiting me: 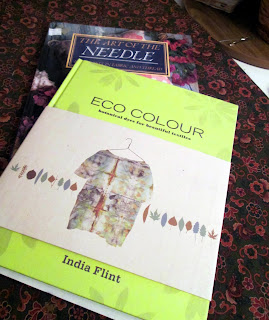 I'd ordered them in early December -- one as the result of a blog post I'd read (can't remember which, now) and the other, because Interweave was offering it on sale at an incredible discount -- enough to make the postage worth it.

The Art of the Needle by Jan Beaney is one I've longed to collect; I bought it second-hand through Amazon.ca, and it arrived slowly but in remarkably good condition.  India Flint's Eco Colour was the Interweave offer, at a price so low I thought I was going to receive an 'e-book' but no -- I actually have a hard copy in my hands.  The temptation to throw all other work out the window and curl up with these is strong, but I'm resisting...for now.

The greatest gift yesterday, though, was the memory of my daughter's birthday, thirty-three years before.

Beautiful photo. The wind is starting to pick up here. I'm sewing away and resisting books! uhm, you might want to recheck that date before your beautiful daughter starts looking for grey hairs! ;)

It's always exciting to start a new project. What fun to receive new books! It is very hard not to sit down with them immediately! I admire your strength to put them aside for now. And finally, (and best for last)....daughters are truly a remarkable gift! I am so thankful for mine!