When All is Said and Done...

'And now these three [things] remain: faith, hope and love. But the greatest of these is love.'

Those Gentle Readers who've followed me for some time know that August is what I've come to call "My Anniversary Month".  I was married in this month 47 years ago -- in heat and humidity, in a little old church in southwest Quebec.  Thirty-one years later, on the same day, my DH died in a room just a wee bit away from the ER in a hospital in Calgary.  If you've followed me, you already know the story and I'm not going to repeat it here.

After everything has gone up in smoke and ash, what remains is...love.

Last year in August I began to work on a piece with that title; "What Remains is Love".  It's a sampler from Black Bird Designs, created especially for the 20th anniversary of one of my favourite needlework shops, Traditional Stitches, near Calgary.  I got a good start on it, but put it away after August -- until February of this year, which marked 47 years from our engagement to be married.

This month I took it out again and discovered that, lo, and behold!  I'd completed more of it than I'd thought -- so I decided to finish it -- and yesterday, I did.

It still needs a good press, and will be framed -- eventually -- but for now it's pinned up on my studio design wall: 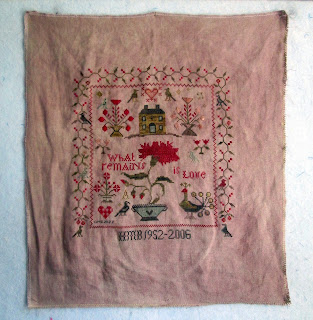 And here's a close up of how I finished the bottom -- which differs from the pattern: 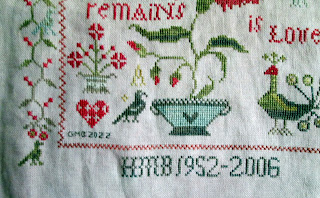 I used the alphabet provided in the pattern for the ornate "HMB" (my DH's initials) and adapted the numerals provided so that they'd match the size of the letters (vertically).

Typical of my challenges with counted cross-stitch, there are glitches -- mainly in the spacing of the motifs -- which (of course) produces a 'domino' effect.  I ended up lengthening the side borders a little bit, and, having some extra space in the lower left corner, added the heart motif -- taken from a different pattern, designed by Erica Michaels.  I look on that as a blessing, despite my fuding elsewhere in the piece!

Since my last post, I've almost completed the Erica Michaels piece, but can't share it here in case the recipient reads my blog post (it's a birthday gift).  And of course, once finished with "What Remains...", I had to start a new piece, right?!  You bet!

So yesterday I set out on the first motif of "Quaker du Japon", which I ordered to make up as a Christmas gift for my son.  It's a very soothing stitch thus far -- an "order out of chaos" sort of practice, which I really need right now.

Blessedly, though we're having a spate of Very Hot (for Canada) weather (again), there's been a bit of a breeze, so I'm able to sit outside to stitch -- and enjoy my garden.  The zucchini and cherry tomatoes are beginning to ripen at a steady pace, the Brown-eyed Susans are starting to blossom -- and then there's this bee balm blossom that looks double!

The bee balm's been blooming steadily for over two weeks now -- still going strong on the southeast corner of my house, with potentilla and lilies behind it trying to catch up.

Across the lawn to the east, under the small Mountain Ash (aka 'Rowan'), to my delight -- at last -- this year the poppy seed given me by my neighbour has not only sprouted but grown and blossomed!

I planted them in a bed with other wild flowers, which are also starting to appear.  There are some forget-me-nots just out of camera range...and then there's the Whatever It Is right next to the poppies.  😆  I won't know for certain what it is until it blooms -- and maybe not even then!  No matter; I'll enjoy it!

Signing off with a link to Nina-Marie's Off the Wall Friday, and wishing you a lovely weekend, wherever you are. This week she's written about creating happiness -- especially if you're a maker.  It seems to come down to this: have faith in yourself, hope (and confidence) in your gifts, graces and abilities -- and love yourself enough to appreciate the unique being you are!

Thanks for stopping by!

Margaret, I've been following you for years, know the back story, but somehow I missed that you and I were married the same year. Dana and I celebrated our 47th anniversary this past June. You were youngsters, like us.

Love the fudging of the counted cross stitch. Can so relate to checking and double checking, counting and recounting only to be be off by a stitch or two requiring adaption and then adapting to the adaption. :). It's lovely sampler. Even matches the current color scheme of your garden. What a lovely tribute to your husband and your time together.

I've only recently been reading your blog but have for a long time noted your comments on Facebook and felt a special connection. I came from embroidery and cross-stitch into quilting, and retain a deep admiration for all handwork. However, Elizabeth My Almost Perfect Cat also has a strong fascination with all taut thread as well as my lap, so I have to enjoy others' work.
I had the same Love scripture quoted at my wedding and enjoyed 57 years of marriage. August 9 is a special date for me...it's when I met my husband-to-be on a blind date. More proof that love is blind. Joining you in celebration of love and happy memories.