I've been doing quite a bit of hand-stitching lately, though not of the free-hand variety.  No; I've returned to an old favourite -- perhaps the second craft I learned as a child: cross-stitch.  It's almost as soothing as knitting, and definitely as colourful!

Completely smitten by a couple of "Floss Tubes" during these blustery winter days -- especially the banter and total acquisition madness of "Brenda and the Serial Starter" -- I've dug out pieces I collected long ago -- some that I've kitted up but not started, and others in progress that have been languishing far too long.

One designer I collected for a while is Just Nan Designs.  I'm not great at making 'smalls' -- however sweet and cute they may be -- but I love her esthetic and the pieces have been fairly straight-forward to stitch.

I have one hanging in my bedroom: "Summer Night", which I finished in 2005:

I recently finished a second one -- "Purple Heart" -- no longer available except, perhaps, on e-Bay or Etsy; it dates to the early 2000s. I made it into a small stuffed heart, and sent it to a friend whose husband died recently.  I hope it brings her comfort.  She used to be a Red Hat Lady, and this little piece was part of that series Just Nan created back in the day.  I forgot to photograph it, but you can see it in this internet photo from Pinterest: 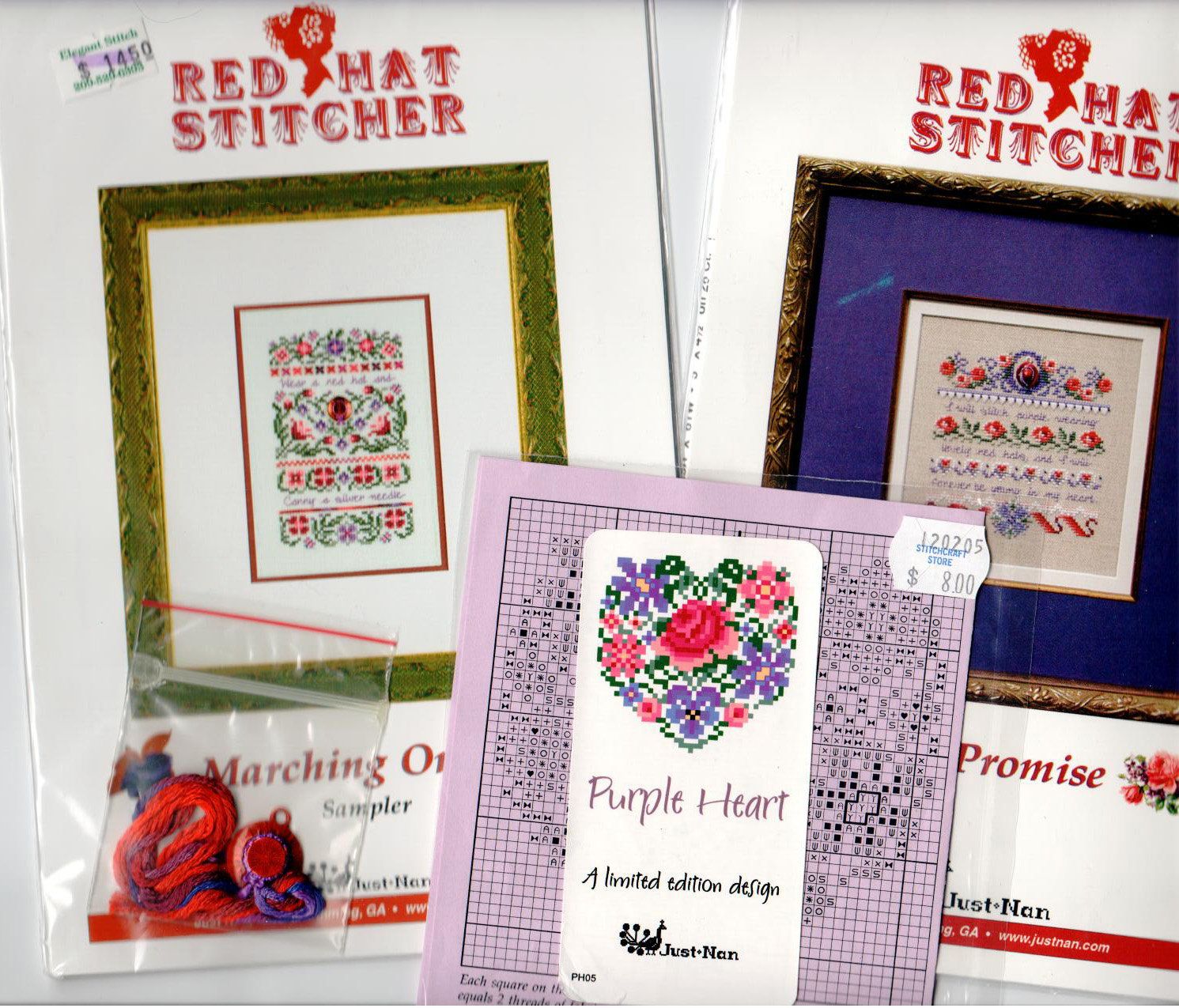 What's not shown on the piece (front and centre) is that in real life the kit included a tiny hummingbird bead, mounted in the top right of the heart, just on the edge of the rose.  I love the colours in this series, and have one other "Red Hat Stitcher" pattern kitted up as well -- "on my radar", as Laura, "The Serial Starter", would say.  This one is "Marching Orders" (another Pinterest photo): 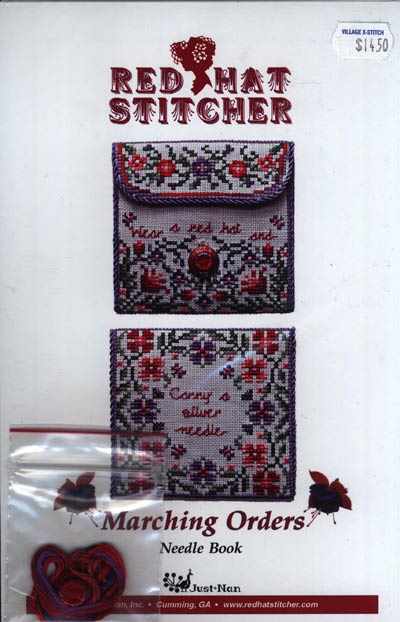 I'm not fond of 'fiddly', but having made a passable stuffed heart and tiny pillow ("Humbug", a couple of months ago), I just might actually make that piece into a needle book!
The second Just Nan piece I've been working on is yet another that I've had for years (the pattern is dated 2004), but began to stitch three or four years ago, when I visited the friends who gave me that sweet little kitty needle-minder pictured above.  It's called "Schoolgirl Basics", and when I got it out of the bag I kept it in, I was surprised how much I'd completed.  See the wee magnet and needle on the left (below)?  That's where I'd stopped stitching.  Since then, I've worked on the rest, and now there's only one row at the bottom to do -- plus all the beads, of course.  And yes; there are a lot of beads! 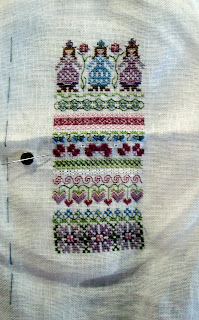 Here's a close up of the top few rows: 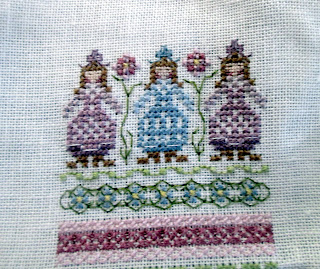 And another of that bottom section: 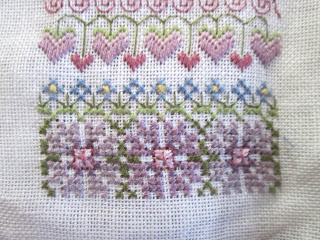 In addition to the "Red Hat Stitcher" series, I have one from the "RetroPrint" series -- kitted up with threads and 28-count white Lugana; it's called "Creativity" (Photo source: Pinterest).  The text reads "In the midst of life's activity, find time for creativity." 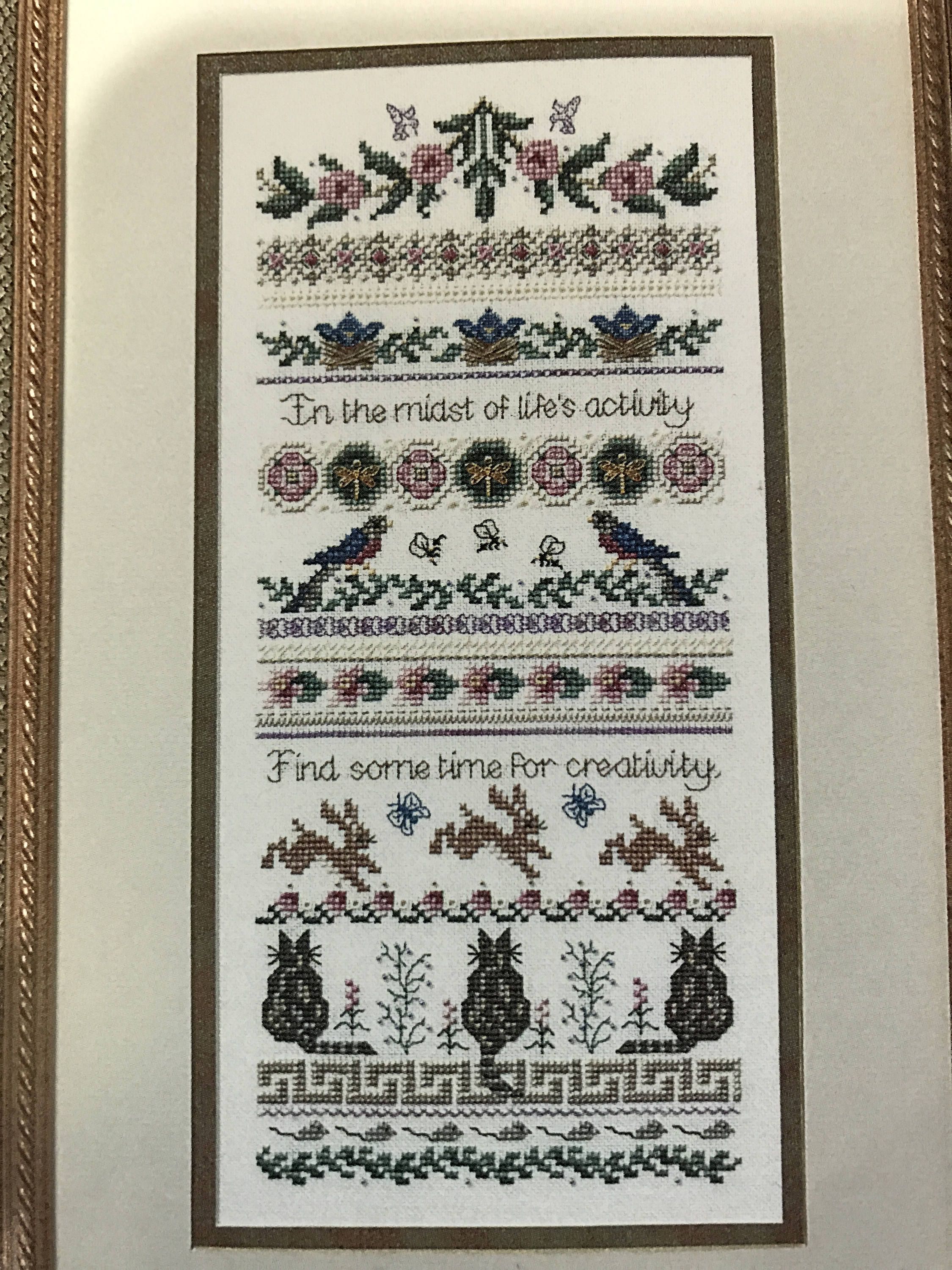 Given my current life, I'd best make stitching this one a priority!

Aside from these finished pieces and the series mentioned, I have a fistful of Just Nan patterns that have embellishments attached but no threads or fabric added (yet): "Barnabee's Quest" Parts I, II and III (2001); "Freedom Flowers" (2003); "Wings" (2004); "Royal Blossoms" -- dated 2007 but a complimentary black-and-white reprint of a 1997 design; and "Gilded Dragonfly", a scissors fob kit (2008).  I think I got most of these from Traditional Stitches, which remains my go-to needlework shop. (Located just west of Calgary, Alberta, the shop does a roaring online business and they're wonderful to work with.  They have many US customers too, including the afore-mentioned Brenda and Laura -- the Serial Starter.)

Another of my favourite designers is Canada's Jeannette Douglas.  A few posts ago, I mentioned I was participating in her free stitch-a-month project for 2022, the "Mini Bouquet Sampler".  I finished January's design and have made a small start on the one for February: 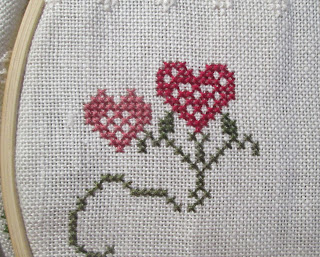 Next, in context.  It's placed just to the right
of the January motif. (The darling kitty
needle-minder was a gift from
stitching friends at Christmas 2021.) 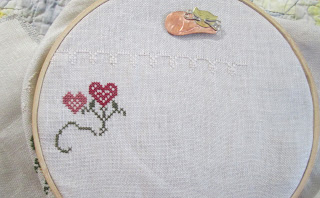 I also mentioned I was working on Jeannette's wee piece, 'Mon Coeur'; it's well past just the border now... 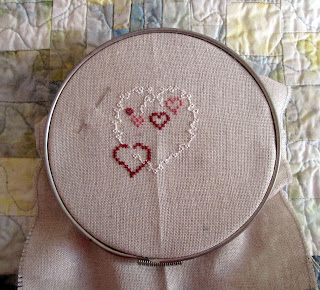 This is a teeny-tiny piece -- that hoop is only 5" in diameter! -- and I fudged the white heart a bit because I was challenged to line up the stitches with that slippery thread!  I'm determined not to allow perfection to stand in the way of finishing some of these projects!

You've probably gathered from these photos that I've focused my stitching on contemporary designs, including band samplers, and haven't made many (any?) more traditional pieces, including reproduction samplers.  That's true.  I've not fallen under the spell of alphabets and numerals, of small houses, and Adam-and-Eve-and-serpent designs.

Then last year Traditional Stitches announced the second of two samplers in the traditional style, celebrating their 20th anniversary.  This one was commissioned in a limited edition from Blackbird Designs.  I took one look at the pattern in the shop's newsletter last summer, and though I was late to the party, I bought it and began to work on it in August -- it's mentioned in THIS POST from August 22.  I got the supplies and began it shortly after what would have been my 46th wedding anniversary.

I set it aside a while back, when outdoor stitching came to a halt as cold weather moved in...and I went back to more knitting and quilting.

But 47 years ago today my late husband and I announced our   engagement, so when I finish this post I'll be returning to that design --  "What Remains is Love"  -- and will work on it for the rest of   the afternoon, and perhaps through the weekend.*  It's only fitting to stitch on this, remembering that day so long ago when we startled our parents and friends with the news.  That memory always makes me smile!

Aside from all that stitching, I've continued to work on pieced quilts.  One is a free pattern from stitch-and-quilt designer, Lori Holt; it's called "Spare Squares" and uses up small and not so small squares in a simple four-patch/nine-patch pattern, which she demonstrates in a YouTube tutorial.  Using Bonnie Hunter's Scrap User's System (she of the 'bonus triangles' I've been using up in art pieces recently!), I've amassed a gazillion 1 1/2" squares which I turned into four-patches and combined with 'spare squares' to make this top to give away.  I've got to put a border on it to bring it to the size I want, but here's the top at present, draped over a chair in my living room; it's currently 42 1/2" x 54 1/2" and needs to be about 6" larger all the way 'round: 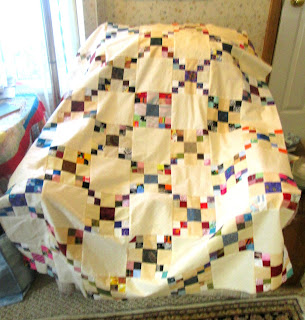 Here's a close-up of the blocks:
I'd taken the photo and turned away to do something at my desk.  When I turned back a short while later, I found that the top was being tested for comfort and quality by my Studio Assistant... 😆

Speaking of Bonnie Hunter...I continue to plug away at her 2020 Mystery, "Rhododendron Trail".  I'm now assembling the first set of blocks.  There are two sets -- each with a different pattern.  This is 'Block A', which will finish at 10" square in the quilt (the photo is taken from an odd angle; these really are square! LOL!)  The centre square has more red in it than shown in the photo, and it's surrounded by butter-yellow squares...then the white back-ground fabric.  It's more visible in person! 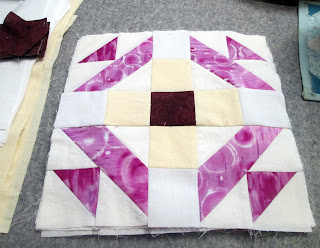 Believe it or not, I can see a bit of daylight on the table next to my sewing machine, meaning that the string pile is declining...but don't look at the full box of scraps on the floor under the cutting table, or the pile of odds and sods waiting to be cut into usable SUS units, or at the basket of bits on the back of the sewing surface, or...well...you get the idea!

I'm not without knitting, of course.  I'm making progress on my Turtle Dove II pullover; the photo shows only the split for the sleeves, but I've finished the body and am working on a split hem in a one-one twisted rib.  The back of that hem is finished and front hem is half-finished.  After that -- only the sleeves remain.  I continue to love this project!

When one of my friends spied the headbands I made for my daughter's birthday, she wanted one too -- and has commissioned me to make it for her.  I'm using more of that Red Heart "Heat Wave" yarn because it's soft and cushy, and appears to be cozy too.  I'm just over half-way along the line of cables now and should have it in the mail to her in the next week:

Last on the knitting front...a pair of socks for February, trying to master stranded knitting in fingering-weight yarn.  It took me 3 tries (you can see photos on my Ravelry post), but I finally managed to get the tension to a satisfactory level (not perfect, but good enough):

Well, Gentle Readers...that's all the news that's fit to print from my little prairie hamlet. I'm linking this up with Nina Marie's Off the Wall Friday, and I'm leaving you to take her advice (via Picasso).  You can check that out HERE.  So long for now! 😊

*Good news   for stitchers who may want it when you follow that link and   see it: though it was limited, it will now be available to shops at Nashville Needlework Market in early March -- as in next month!

I am so excited and really grateful to see what you have on the needles - and please send me the link for your transfer and amount so your precious time and the yarn will be compensated, hopefully before your finish line...

Cheers and a hug...
bethany
xo