The Itch to Stitch

In my last post, I talked about my return to cross-stitch.  Since then, I've done very little else but scratch that itch!  Yep...I fell headfirst down that rabbit hole, even starting to stitch with my first mug of coffee for the day.  My sewing machine was beginning to gather dust, and even my knitting's felt rather left out!

Mother Nature cooperated by giving these parts a wonderful mix of rain, ice, snow, wind and deep freeze temps.  This meant lots of time to stay home and stitch!

It's paid off too!  Here are some finishes...

A birthday gift for my friend Mary W. who, like me, loves to garden.  "The Potting Shed" -- -- from Elizabeth's Designs, which I think are no longer readily available, except on places like e-Bay and etsy.  I finished it with a quilted border using some bits of a gardening-themed fabric that I bought some years back (for what purpose, I can't recall -- of course! 😉)  It finished at about 8" square: 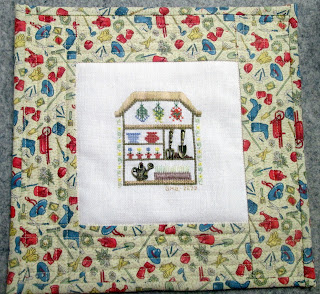 And here's the back - red poly-cotton from my "inheritance"! 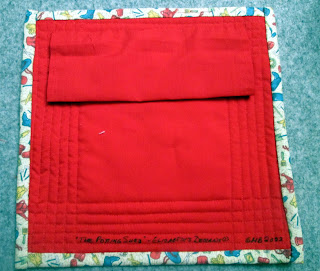 She and her DH have an indoor garden -- a gift from one of their sons at Xmas -- and so she chose to mount it on the side of the structure.  Isn't that cute?!  Makes me smile every time I think of it! 😊

Next up: I finished the February mini-bouquet from the free monthly series produced by Jeannette Douglas.  So pretty -- with a Valentine theme, of course! 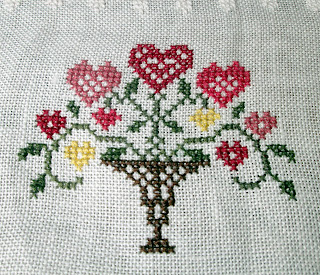 I expect the March motif will be out on Tuesday.  It's delightful to discovery what's coming next in this SAL (Stich ALong).

And given that my DH and I were engaged in February, I worked on two other pieces.  The first -- which I finished yesterday -- is another of Jeannette's designs: "Mon Coeur".  If you read my last post you'll remember that I struggled with the slippery white thread that was used for the initial heart outline.  As a result the rest of the design didn't fit as shown.

In other words -- it was time to fudge it!

There was a time when I'd never have done that!  Perhaps, though, both age and the lessons I've learned from art quilting have served me well.  I figured, "It's about love!  It's about hearts! So, why not personalize it?!"

At about 4" square, stuffed with clean, uncarded fleece, it's joined the "Humbug" pillow, a biscornu (a gift from a stitching friend) and Jeannette's "Love Needleroll" (from a class I took with her in...umm...2005?  I didn't finish it till 2010!) in a wicker basket on the pass-through shelf between my kitchen and my living room.  There's lots of room in the basket for more of these tiny finishes.  I'm not into "fiddly" things (don't ask me to make a stuffed toy!) but these little pieces are simple and easy (no zippers, no body parts, no funky angles!)

At the same time, as I mentioned in my last post, I worked on What Remains is Love from Blackbird Designs, created for Traditional Stitches' 20th Anniversary.

Yep.  I'm "spatially challenged" -- just like Laura (the Serial Starter from the podcast with her friend, Brenda).  I put it down to my myopic, astygmatic eyes.  I have a tendency to transpose numbers and patterns, and my eyes can 'jog' down a line (or two) when I'm reading charts for stitching and knitting.  I use magnetic strips or rulers to mark the place on which I'm working, but -- as you'll soon see -- that doesn't always work.  It happened with "Mon Coeur" (above) and again with "What Remains".

In the latter, I didn't discover my error until I'd gone past what I consider The Point of No Return, and it had a domino effect.

I was stitching merrily along on the large blossom that's a focal point in the sampler...when suddenly I noticed it seemed wider than the pattern called for -- and yet the position with respect to the house motif above it seemed fine.  I figured, "It's just a flower" and added some stitches to ensure it looked like the one in the pattern.

Then I began the stem and leaves...and that's where it fell off the rails -- sort of.

At least, that's when I discovered my error!  It all stemmed back to the start of the text -- the words "What remains".  I stitched them lower and a bit farther left than the pattern indicated -- and that shifted the flower accordingly:

In the above photo, the word "What" is below the leaf in the motif on the left (circled).  It's supposed to have started farther up and slightly to the right of that leaf.  That this did was shift the flower such that it's lower than the bit of bottom border that I'd stitched a few months ago (circled).  Blessedly, that's the only bit of bottom border I've done, and it's easily frogged and moved lower.  (Yes, I've enough fabric to allow that.)  In fact, it might be a positive "Oops!", because I wanted an appropriate space for my late DH's initials -- and maybe dates.  I may just have found it.

After I finished the flower, I moved on to the remaining text ("is Love") and then the peacock motif below that text.  If I'd thought about it, I'd have moved the bird a bit to the left...but instead I chose to position it under the "L" in "Love", as called for in the pattern.  This, of course means that I'm cutting it fine with the right-hand border. Sigh.  The ruler shows where that border lies.  The arrow points to where I stopped stitching it a few months ago, and the circle shows how, if I continue it 'as is', it'll be right up against the bird's tail feathers.

There's a lot of stitching in that bird -- and in the top of that border, thus far, so I might just leave it!

As it is, I'm taking a break from it because I've run out of one of the greens (due to frogging part of  the leaves/stems of that blossom in order to adjust the position of the flower buds).  It's on order.  There's no deadline for this piece -- I'm doing it as a gift to myself -- so I'll just keep working on other pieces.  Maybe even some knitting and quilting!

The second braided cable headband was finished and sent to my friend in Ontario -- she reports that she's delighted with it and it fits!

I also completed one of my colour-work socks for the February Socks from Stash challenge, but have been so besotted with my stitching that I've not even cast on the second one!

The "bump" you see on my leg in the photo is just from the leggings I was wearing at the time. I didn't bother smoothing them out!

And...because I wanted to Focus on Fair Isle in February, I watched my Craftsy Class -- "Fair Isle Fundamentals" -- and began a worsted-weight hat in four colours, all wool:
It's slow-going, but I'm plugging away at it, a bit each day.  And yes, with my chart-reading challenges, there's been some 'tinking' (reverse knitting) going on along the way.  I'm not sure I'm loving it...and am gearing up for the possibility that full-on Fair Isle or Scandinavian patterns aren't in my future -- much as I admire them.  Still, once I get going on the pattern, I find I have to keep knitting to see how it'll turn out! 😆

You'll note the brim curls at the bottom.  This is likely due to the fact that I couldn't face starting that corrugated ribbing in different colours, immediately after casting on with the dark teal -- so I knit a single row to ensure a good join.  I may rip it out and cast off that edge -- or I may simply fold it under and stitch it down once the hat is finished.  We shall see!

As for quilting...or at least, piecing -- I did manage to get a 3" border on my "Spare Squares" quilt top.  Here it is on my back stoop in yesterday's late afternoon sunshine: 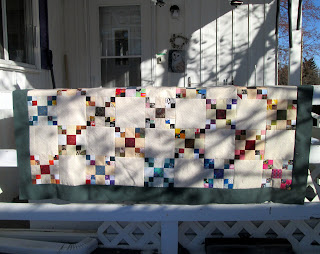 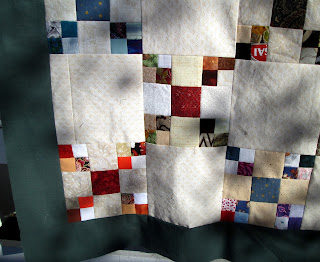 The border is a really deep green -- cotton, I think, from my "inheritance"; the top -- it's a lap quilt -- finishes at 48" x 60".  Next up: piece the backing (a warm brown/tan from the "inheritanc" which I think mainly cotton), sandwich and quilt!  I'll bind it in the remaining deep green fabric.

I also shocked my sewing machine yesterday, when I decided to keep going after finishing that little Mon Coeur pillow.  I made 2 more blocks for my Rhododendron Trail -- that makes 12 now -- and finished 2 more wonky logs.  I've 90 of those now and I'm aiming for 99 so I can make the top 9 blocks across by 11 rows.  That would make it 45" x 55" before adding a border of some sort.  Then again, I've not laid them out, so there might be sashing going on.  Another "we'll see".

Today?  I've worked on that hat, so I might just jolt my sewing machine again and do a bit of piecing.  But then again...In this week's mail arrived the stitching pattern and fabric for a piece I want do do up for a friend's June birthday.  And I fell for and dowloaded a pattern for a 'red sampler' (that's one with all read floss on a cream or white background)...and there's a walk that has to happen later on this afternoon to try to maintain my svelt (!) figure following days of staying indoors.

I'll leave you with the link to Nina Marie's Off the Wall Friday -- where's she's been playing with colour in a new way -- and wish you a cozy, safe, creative, colourful week, whatever that means for you.  As Brenda and Laura (the Serial Starter) are won't to say, "Stitch what makes you happy!"

P.S. in Other Good News: my piece, Incarnation to Resurrection: Reflections on Colours of the Church Year will be winging its way to Virginia in a few months, to appear in the "Spirituality" section of the most wonderful Sacred Threads 2022 juried exhibit.  I found this out yesterday, and have been smiling steadily ever since!

Congratulations on having your piece accepted not the juried show. Smiles are definately in order.

I found counted cross stitch quite addictive when I was in university. Perhaps because it was fascinating to watch the picture appear from a blank piece of linen. I gave it up at some point, and I am enjoying seeing yours.