The Blue and the Gold: for Ukraine

"War can leave us feeling powerlessness. We want to do things but we usually don’t know where to start." -- Jacob De Graaf, Modern Folk Embroidery blog

I venture to say that's what many (most?) of us over here (i.e. far from Ukraine and its efforts to keep Russia from stealing its democracy) are feeling right now.  I know that's where my mind and heart are: reeling at the thought of another world-involved, European-centred conflict that both my father and step-father fought in hopes it would never happen again.

What to do?  What can one do -- especially as an older (pushing 70) female half a world away?

Dear God, what are you doing up there?  You are doing nothing!  Why don't you try stopping a war or something?!  (paraphrasing Helene Hanff's letter to Frank Doel in the film 84 Charing Cross Road.)

Well, for one thing, I've donated $$ to the Primate's World Development and Relief Fund (PWRDF) -- the arm of the Anglican Church of Canada that partners internationally to bring funds and supplies to places in need.  The PWRDF is currently partnered with ACT Alliance Appeal/Hungarian Interchurch Aid (HIA) to help those fleeing Russia's war-mongering in Ukraine, and has recently increased its support from $20K to $50K.  Because I trust PWRDF and it keeps its admin costs low, I am assured that my wee donation, with that of so many others, will go where it's most needed in that quarter.

The blue and gold -- DMC floss #444 (yellow) and #322 (blue) are the colours of the Ukrainian flag.  The lettering is in the Cyrillic alphabet, which is used in Ukraine.  I began my stitch early this morning, and am 1/2-way along the outer blue border.  It's a small piece, which I'm doing on "mystery fabric" that's estimated at 32-count; I'm using 2 threads of floss over 2 threads of fabric.

On the page linked above, Mr. De Graaf has inserted another link -- one that will take viewers to a list of places and ways to help for those of us living all around the world -- so that we might contribute in some small way, with actions, words and/or funds.

Stitchers might also wish to join a 'solidarity Stitch-ALong' (SAL), with another free pattern created by Linda of At the Point Studio.  In her post, Linda explains the meaning behind the colours she selected, and the design itself.  It's a beautiful, colourful piece to be stitched with intention, thought and (if you wish) prayer.  She includes a link to a Facebook group for the SAL, should you wish to join there as well. 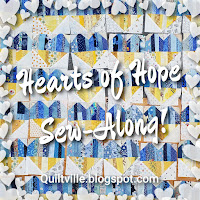 As for quilters...Bonnie Hunter is creating a pattern to be constructed with blue and yellow string pieces, which she is calling "Hearts of Hope" -- and you can read more about that HERE.  The pattern will be given out in pieces (no pun intended!) starting March 25; meanwhile, y'all can dig into your stash for blue, yellow and neutral strings!

In Canada, Karen Chase of Sugar-free Quilts (based in Nova Scotia) is offering a free pattern for a Sunflower Throw Quilt in the 'pixelated' style, as the sunflower is the national flower of Ukraine.  She's been posting about it on her Facebook page.

For those of us who knit/crochet, on her FB page Karen also references a friend who is collecting hand-knit hats, mitts and/or socks for Ukrainian refugees, and asks crafters to get busy, but stay tuned for further information re: where/when to donate!

I'm making a lap quilt that Karen says she'll find a home for in her efforts to support Ukrainian refugees -- but it's not the pattern she offers.  Instead, I've dug out more fabric from my "inheritance" -- poly-cotton solids in 2 shades of blue and one of very pale yellow, and I'm making a Double Irish Chain from a pattern in a book I bought long ago: Quilts From the Quiltmaker's Gift, written by Joanne Larson Line and published in 2001 (I also have The Quiltmaker's Gift itself...)

All the strip sets are cut, and the first two are assembled; the third will be sewn and cut today.


By now, with all this, you might feel less helpless and/or hopeless...but you might also be breathless! Take heart, Gentle Readers, for I'm leaving you with the link to Nina-Marie's Off the Wall Friday post, wherein she provides Rules for a Busy Quilter (and/or knitter and/or stitcher).  Off you go, now...and have a helpful, hopeful, heart-full week!  😊

I won't go on and on as I am awaiting an ice rain and trying to get through TWO SAQA Zooms today...and get home.

Thanks for the sharing and for the lovely work you are doing for the Ukraine assistance groups.. my niece who lived in Russia for many years is taking in some donations for those she knows are affected after moving to Ukraine and now headed to Europe with family friends - I have shared dollars for their travels and small children as they move away from what they thought would be their forever homes.

It's sad and totally so hard to understand - the state of our world is bearing down on so many...

Again thanks - see you online in a bit!