"These quilts are not going to fix the war." -- Judy Martin, in her recent blog post about her one-patch quilts.

And she's right.  But in the face of helplessness, trying not to move into hopelessness, one keeps on keeping on, using one's gifts to bring comfort in light to as many cold, dark places as one can -- including preparing for the arrival of refugees from Ukraine -- and perhaps even from Russia, as so many escape there too.

In my last post I was just starting the construction of a small Double Irish Chain quilt in 2 shades of blue and a very pale shade of yellow.  The top is now finished -- measuring 42" by 60" -- and is sandwiched with a royal blue background.  I'll quilt it later today.

It's all solid fabrics -- but I managed to find a scrap of a print that had the right colours and was just large enough for four cornerstones.  I only wish I'd had more of it to use in the quilt itself!


A few days ago I happened on a YouTube tutorial from "Brita, the Questioning Quilter", who'd created a blue-and-yellow 'Magic 4-patch' (i.e. a Disappearing 4-patch with Possibilities), and decided that I needed to make a second small quilt. I didn't have much in the way of appropriate blue fabric left (I'd put most of the last of it into the backing of the Irish Chain), and I didn't want to use that insipid yellow again, so when I was in town on Thursday I stopped in at my LQS and bought 2 1/2 metres each of these: 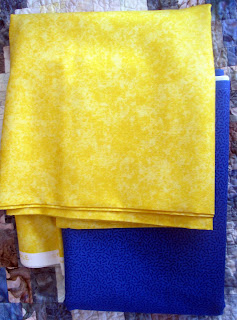 Glorious! They read as 'solid' but each has some texture and I'm delighted with them.  At under $15 a metre, too (they came from the 'once it's gone, it's gone' section of the shop).  Once they're washed (I take no chances!) I'll start that quilt.  I've taken some notes and some screen shots so I can experiment with finding a layout that I like.  I've also saved the link to the video to re-watch if I need more info.  I may be good at free-ranging art and/or improv quilts, but pieced patterns are another matter!  😆

I figure once this second quilt is done, I'll have enough scraps and strings to start the Hearts of Hope quilt that Bonnie Hunter has designed.  Her intro was on her blog yesterday, and Part 1 of the instructions will follow next week (March 25).

Also on Thursday, the mail included my order of a special pair of hand-dyed skeins -- one blue, one yellow -- from Handmaiden/Fleece Artist yarns in Nova Scotia .  I've caked it up and cast on a colour-work cowl done in mosaic knitting -- the Dissent Cowl, designed by Carissa Browning -- on Ravelry. (I chose the knit version; there's a crocheted one too).  Ms. Browning designed this pattern to honour the late Justice Ruth Bader Ginsberg; I feel it's just the right pattern for this beautiful Blue-Faced Leicester (BFL) sport-weight yarn, and the cause being resisted: the unprovoked invasion of Ukraine by a tyranical bully. 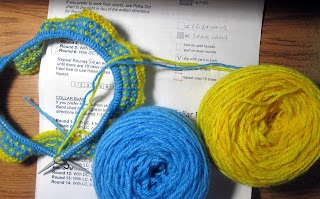 Once finished, the cowl will probably get tucked in with the quilts for donation to refugees.  Maybe I'll even have enough yarn for two!

And I continue to stitch!  In my last post I also mentioned Jacob De Graaf's free cross-stitch pattern .  I've been working on it a bit each day, learning as I go.  I said in that last post I was using a 'mystery fabric', and that it was a pretty fine count.  There's a double outer border of blue stitches, which I did with 2 strands of the DMC (#322) -- and I found it rather 'thick', slow going.  When I got to the two inner borders -- in yellow DMC (#444), I went with a single strand, and it's been much easier ever since!

Now, I learned to cross-stitch about 60 years ago (a few years after I learned to knit), and have never worked on anything smaller that 28-count linen or even-weave.  But lately?  Yep.  I've found that with good light I can do 32- or 36-count or whatever this 'mystery' fabric is -- using a single strand!  Whoo-hoo!

Here's the progress I've made to date:

There have been some other finishes along the way too.  First, a long-languishing pair of socks:

They fit; I've worn them; they're comfortable!  And I've put the remainer of that ball into this new project: the Sock Knitter's Pullover -- designed by Merri Fromm, from knitty.com.  I'm making it all in left-over sock/fingering yarn, one strand only.  Just into my third left-over ball, I'm 3/4 through the raglan increases; here you see it when I was still using the left-overs from those socks.  (You can see more on my Ravelry project page HERE.) 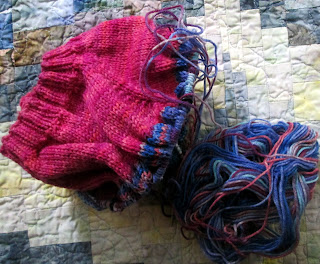 And two small comfort quilts are finally finished -- destined for either the Ukrainian refugees (though not in specific colours) or for Blankets of Love (a charity that donates comfort quilts to patients in psychiatric care).  Here's the first...

And so it goes.

It's International Quilting Day, and I hope to get to quilting that Double Irish Chain, but it's beautifully sunny and forecast to reach at least +10 C (about 50 F) so I want a good walk.  Freezing rain and snow are set to move in over night, with snow forecast through mid-to-late afternoon tomorrow, so...I'd best get going.  If I'm stuck inside tomorrow, I can still quilt -- and knit -- and stitch!

I'm linking this to Nina Marie's Off the Wall Friday, and sending her Get Well wishes, as she says she's taking a sick day today.  Hugs to her -- and hugs to you, Gentle Readers!

Remember to  care for each other and... 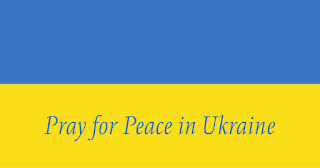 I am so in awe of the time and the work that you have devoted to helping with th worldwide sharing for Ukraine. Your quilts and the fabrics you have chosen are wonderful, and I think the cowl will be a wonderful gift for a special lady far from her home. All including the smaller quilts are a beautiful, and most cherished gifting collection and will be well loved, I am sure.

Hope you got in your walk!
Bethany
xo