September has long been my favourite month.  Like many, I view it as the start of a "second New Year" (the Jewish observance of Rosh Hoshanah notwithstanding).  It's the 'back to school' atmosphere, even if summer-like weather continues well into the month, as it's forecast to do this year in these parts.

The days may be getting shorter, but the chilly winds and rain-turning-to-snow that's usually part of October is still over a month away.  It's pleasant weather for walks and for working in the garden, harvesting the last veggies and starting to prepare the beds for their long winter's nap.

It's also my birthday month, so I suppose that has at least something to do with my belief that "September is special". 😊😉

This year it's another Big Birthday, which is special enough in and of itself, but it's 7-0, which leaves me rather gob-smacked. It shouldn't be surprising -- my kids are 41 and 37, after all -- and I've been widowed 16 years after being married for 31.  I mean, I moved into this wee hamlet 14 years ago this month, and lived in Calgary for 32 years before that.  All of those landmarks in my life -- when you add them up -- mean that my turning 70 shouldn't astonish me, but it does.

I share this birth month with some friends too -- one of whom was a friend from childhood, when she and my sister and I played together in one backyard or another, walked to and from school together, learned to skate together and shared time at our family's cottage several summers in a row (Hi, Susan!).  Another is a gal with whom I'm acquainted on the internet, when we both focused our weblogs on the subject of knitting (Hi, Bess!)

And another is one who's now gone.  She'd be 70 today (Sept. 2)...and I miss her still.  I'm speaking of Candy, who I met in 1967 when our high schools merged, and who died suddenly (heart) in April, 2020.  She's responsible for my being a quilter -- and an artist.  But I've been down that memory lane before; today, suffice to say, I hope she's got a big, beautiful dobos torte (pronounced "dobosh torte") -- one of her favourite sweets -- with which to celebrate with the other saints in heaven.

P.S. Peggy R's 70th is today, too...but Candy and I lost touch with her decades ago.  Wherever she is, I hope she's had a happy life and is celebrating today.

People have asked me how I'm going to celebrate this year.  Any parties?  No.  Family gatherings?  None planned.

Well...I've a few things going on, especially in the 'making' department.

For starters, Someone, Somewhere in the Cross-stitch World dubbed this month "Sampler September" -- so I'll be working on a couple.  Yesterday, being Day 1 of this auspicious month, I started a sampler -- a kit I'd bought a good 15 or more years ago -- which is, in fact, the very first reproduction sampler I'll have stitched.  I think I bought it from Traditional Stitches in Bearspaw, near Calgary.  The price tag reads $52.95 -- which would have been a lot of money for me then (it certainly is now!)  It came with the chart, the (rather stiff) unnamed cream-coloured linen (I think it's 32 count), all the flosses -- provided by DMC according to the materials list, but by colour name rather than number (!), and a needle (feels like a size 26). 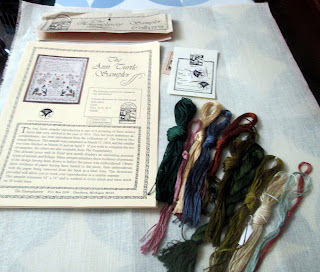 It's a reproduction based on a sampler from the Detroit Historical Museum; the pattern was published by The Exemplarery of Dearborn, Michigan -- in 1979!  From what I can glean off the Traditional Stitches website, the designer was Joanne Harvey -- and all of her works once sold by TS are now out of stock.  Even on e-bay, they would be hard to locate.

The dear girl who wrought the original of this sampler was eleven years old at the time -- and she dated it "March 1810".  According to the verse in the top cartouche, this may have been her first effort at such a task, for which she's asking Jesus' blessing.  And her name -- well!  It's 'Ann Turtle'.  Yes.  T-u-r-t-l-e.  There's not a thing about her in the sampler materials, nor can I find anything just doing an internet search.  Thus her origins -- and that of her surname -- are lost to time and memory, as far as I can tell.

It's only fitting that I bring this work to life for my Big Birthday year!

The other sampler on which I'll be working is my return to "Ruth Gibb 1882", whose connection to my family (if any!) I want to spend some time tracing in the coming winter months. Here's where I left her in June: 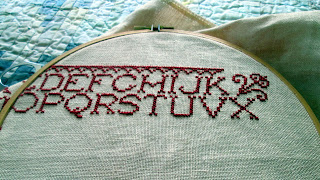 I'm hoping to get the rest of the capital letters and all of the lower-case letters finished by month-end.

While I've finished stitching one of my gift samplers -- for a November birthday -- I've got another November birthday (another 7-0 friend!) to work on (a needle roll from The Victoria Sampler is planned for that) and of course the Christmas gift stitches I've started.  In August I made great progress on the "Quaker du Japon" from Jardin Prive, for my son: 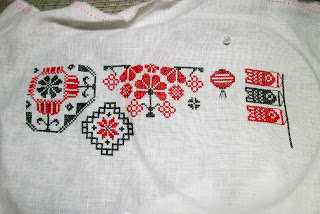 And "Growth Chart" is coming along nicely too.  I'll be spending at least another full week's worth of stitching on it later this month, with hopes of a finish by early November.  Here's where I left off as of August 21st -- nearly 1/2 way!

In the Stitchy World there's also something known as a "Birthday Start".  Another needle roll surfaced in my stash -- also from The Victoria Sampler, but this one is for (you guessed it!) September.  I'll work on it on The Day and see how far I get!

This year, I'm doing a bit of both of those "firsts".  Late Tuesday afternoon -- the day after Labour Day -- will find me on a Zoom call with several others enrolled in the "Interpretation of Scripture" class, free from the Anglican Diocese of Calgary.  Some will be taking this purely out of interest.  Others, like me, will be taking it as one of 2 courses needed for a License to Preach as a lay minister in the Diocese.  As I've been doing this at least monthly for our tiny rural parish -- we share our priest with another parish -- and as my Associate-in-Theology diploma is 22 years old, upon discussion with one of the leaders of the Diocesan Rural Ministry team, I decided to go for the license.  If nothing else, it will be a good refresher, and I might learn some new approaches to preaching.  Like any class, there's a text book (on its way to me from Indigo/Chapters Books), assigned reading and assigned writing.  Back to school!

And then there's the Art in the Park Residency Assignment.  When I got back, I posted about the inspiration of that time in Rogers Pass in Canada's Glacier National Park.  Since then I've been mulling over ideas and slowly collecting resources and materials. 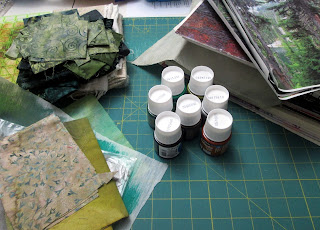 I've printed off a few photos, dug out some books and DVDs re: inspiration and techniques (mainly "Double Trouble" productions -- Jan Beaney and Jean Littlejohn), added to my fabric stash (scrap batik bundles in dark greens and assorted 'tree' colours) and updated my fabric paint inventory (MAIWA has been having a sale on Setacolor sets; I bought a set of opaque paints in the "Earth Hue" palette, plus a couple of transparent singles in the same vein. 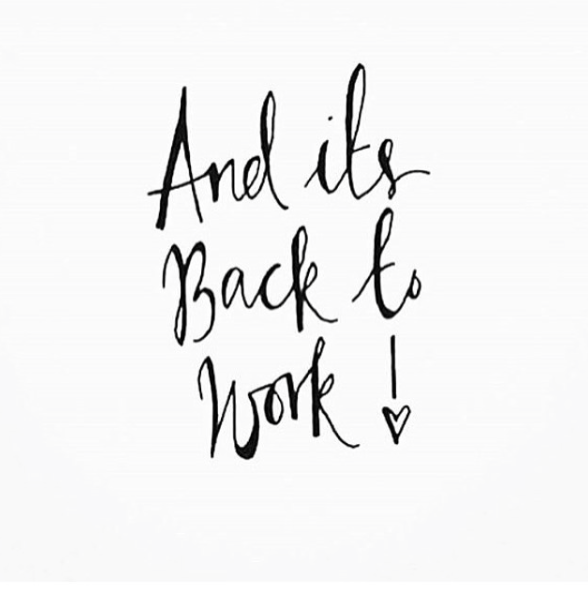 You are my witnesses -- and must hold me to account! LOL!

On that cheerful note, Gentle Readers, I wish you a lovely weekend, a happy return to whatever you do, wherever you do it -- and leave you (as usual) with a link to Nina-Marie's Off the Wall Friday.

This week she's busy working in her studio -- for "National Sewing Month".  There's a blog hop going on -- and we're all invited to join in the fun.  I'll be cruising by to see what's up -- and to boost my quilting/art mojo as I make my samples.  How about you?  Till later...

Study what you love.

Work at what you love.

Live what you love.