I've had quite a bit on my plate in the last couple of weeks, so I've been trying  find  ways to procrastinate other things to do.  The Gremlins of Planned Obsolescence have been happy to help.

On Monday, my drip coffee pot died.  I don't know how old it was, but I've lived here for 13 years and it's the second replacement in that time.  It's predecessor was from a thrift shop, so I can't fault it for not lasting -- but neither of these lived up to the quality of the 23-year-old one I brought with me from my former home.

On Wednesday, my not-quite-10-years-old clothes dryer died.  Well...maybe it's only ill and needs a part.  I'll find out for sure when the appliance repair man (yes, they still exist and this one happens to be a man) comes on Monday afternoon.   I'm hoping the machine is down, but not out just yet!

As for the coffee pot, my friend C. lent me one till the local hardware store gets in its shipment, expected about a week from now.  C. didn't want me to have to resort to instant coffee while I waited -- bless her!

Other things to do have included quilting, binding and wrapping the little quilt I showed you in my last post (sorry, no photo of it quilted) -- it and one other out-of-town Christmas gift will be mailed early next week.

And I've been working on C's Christmas gift (no photo -- she might be reading this!); it's coming along nicely.

Advent began on November 28; in addition to attending an Advent Retreat for which a local small group has formed on Zoom, I've cast on a pattern for socks, broken up into just enough units to get a pair finished on Christmas Eve.

I'm making them in "royal purple" -- the long-time liturgical colour for Advent, even though now blue is often used.  As of last evening, the leg units were finished.  It's ready for today's section: the heel flap.

The first patten section was a bit tricky -- I didn't understand the directions, so after a couple of failed attempts, I contacted the designer.  Edith's a nice woman in Germany, and it turns out that essentially, the intended instruction was lost in translation.  Once she clarified it, I had no problem.  Can you see the wee butterflies in the section right after the ribbing (on the left)?  So cute!

On the quilting front, it's been a combination of art exhibiting and scrap quilting.  The Lacombe "Under $100 Art Market" ran from November 25 through 27.  I volunteered for cash duty on the 25th, which was a lot of fun -- but exhausting!  Even though there was masking and a certain amount of distancing kept, I've not been around that many people in a long while, and I found I'm not used to it!

I believe in "Art for art" -- that is, when I sell something, if I can find something affordable, based on how much I've earned, I'll buy a piece of art from another artist -- generally someone who uses a different medium.  I managed to sell a few items at the "U $100" sale, so was able to purchase a mug from a young potter whose work there I admired -- "The Beagle and the Alchemist". 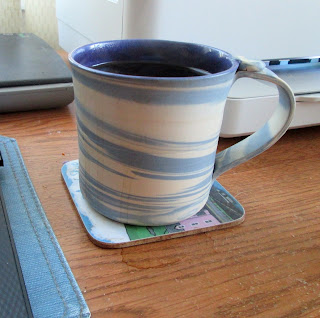 It's my new favourite coffee mug.  (Shhhh!  Mustn't let the others in my collection hear my admiring sighs.)

In a few hours I'll be making my way to Curiosity Art & Framing in Red Deer, where I've just finished a stint as 'Featured Artist' -- but where it's still on exhibit for the next few months at least.  Today I'll be there for guests at a Christmas Reception, and will be bringing with me three more small pieces -- framed -- that didn't sell at the U$100 market:

The gallery's a fairly small space, so it's operating under the REP program (Alberta's name for a 'vaccine passport), meaning that attendees have to show proof of vaccination.  They also have to wear masks except when enjoying refreshments, and try to keep distance while viewing the art and talking with the staff and the artist(s).  And the owner's opening up the big back framing studio for refreshments and perhaps some more art on display, so that should make distancing somewhat easier -- I hope!  I'll be there from 3 to 5 p.m.!

In the ongoing work of the Keep-It-Out-of-the-Landfill Project, I've got the better part of a new top finished.  I find that making string blocks very calming (as you know), so I got to it and finished the 98 blocks I needed for Bonnie Hunter's Basket-weave Strings pattern: 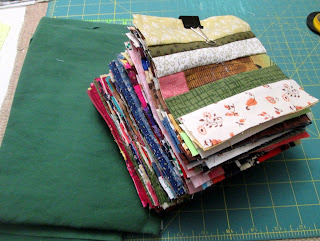 The dark green fabric you see in the photo is for the setting triangles and corner blocks.  I've now managed to assemble the central part of the top -- and I'm really pleased with it. 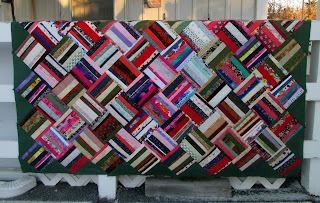 With neighbouring British Columbia hit by both fires and floods this past year -- and still coming out from under -- I've decided to keep plugging away at my scrap stash to make tops -- some the size I can quilt myself, others that will need the help of a long-arm quilter -- getting them ready to send away when they're ready to be received.  I have "more stash than cash", so that's how I can help...

Now that "Basket-weave" is almost finished, what's next?

I've been keeping an eye on the clues for Bonnie Hunter's 2021 mystery, "Rhododendron Trail" and, well...today, with the release of the second clue, I went down that procrastination lane rabbit hole too, printing off the intro and the first two clues.  I already have a stack of solids from my inheritance that should be just right...

So...I'm off to get 'gussied up' to go to the Christmas Reception...and will leave you again with the link to Nina-Marie's Off the Wall Friday, wherein she proceeds to embarrass me...you'll have to read to find out how... 😉

I mean if I can't embarrass one of the last liberal friends who is actually talking to me who can ya? :) I want to say that I groan every time I lose a beloved vintage appliance because the adage "they don't make them like they used too" is so very true ...so I feel your pain. We soon will be remodeling our kitchen and our 30 yr old kenmore refrig will have to go - groan! So sad - lol!