I meant to post last week -- really I did.  But I got sad news on that Friday morning -- the death of a cousin in the Maritimes, after a long illness -- and I just couldn't get motivated for a "cheap and cheerful" post, which is my preference most of the time.

That family of cousins moved out of Quebec to New Brunswick when we were all in our teens, and we lost touch for decades.  I'd reconnected with his sister and become friendly with his wife on FB in recent years, and though I knew he'd been ill for a long time, it came as a blow.

There was a tribute to him presented by his family and close friends yesterday on Zoom.  He was -- according to his buddies -- quite a handful in his teens and early twenties, and had a real zest for life, even after his diagnosis.  He sold his business then and he and his wife travelled extensively, eventually setting in a beautiful spot on the northeast coast of New Brunswick.

I was thankful to be invited to watch the presentation as partof the family.  There aren't many of our generation left in his immediate family now.

SO!  Today, I am taking a deep breath -- and carrying on with sharing what's kept me sane over the last three weeks!

In my last post, you might remember that I was working on a variety of projects, trying to get things finished.  Things stopped, in other words.  And I have!

On Monday past, I delivered this stack of small quilts to a venue that sponsors a program for new (mainly single) moms: 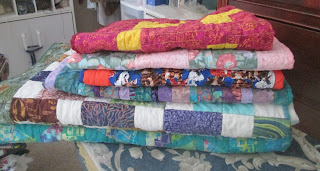 The top quilt in the stack is the smallest -- definitely for "tummy time" or as a car seat blanket.  I made it when inspired by the Craftsy class taught by Joe Cunningham, using his "Two Crazy Sisters" idea, which I refer to as "Off the Rails", or "Rail Fence Variation".  I'd had it lying around doing nothing for a couple of years, 'til I finally decided to quilt it and give it away.

The next quilt down is a 'twin' of the tummy time blanket I made for the new grand-daughter of friends of mine.  (I posted about that HERE.)

The third  quilt in the stack you may have noticed under the needle when I set up a second sewing station in the kitchen.  I've sinced dismantled that station, having decided it's not fun trying to be in two places at once! 😉

I call this one "Crazy Cats"; it originated in Joe's online workshop in the "Quilt Freedom" series -- the one on using grids.  I didn't take a photo of it quilted, but here it is as a top, on my design wall:

The fourth from the top of the stack is a QAYG made of strings, in the fashion of those Jelly Roll quilts people sometimes make.  I didn't bother worrying that the fabrics were from different lines (though most are batiks) and different widths -- some of them even a bit wonky.  Most of the strings were the ones I had left after I decided to scale down the size of the "Bali Sunrise" QAYG (still under construction, by the way).

I call it "Any String Will Do":

Second from the bottom is the "Broken Bricks" quilt -- also referred to as "Interweave" -- a top made of assorted 5" squares, many of them "charms", cut in half and pieced with 2 1/2" neutral squares.  I added borders to it and quilted it with 4" squares.
"Bricks" is one of the largest in the stack, but the very largest is the one on the bottom --  the "Strip-Along" quilt I made (GE Designs) in the summer/early fall.  It's definitely throw-sized.  Gudrun, the designer, called it "Strip to Shore", so I made it with fabrics that give it a "tropical" feel...

And yes, I'm still working on "Grassy Lake" -- all those string blocks! -- but I'm happy to report that as of Thursday, I'd finished 20 of the 40 I need for the size I'm doing, and have cut out all 160 two-and-a-half-inch squares to go with them!

There have been starts in the sewdio too.

When I trimmed "Any String Will Do", I had some interesting edges...

The shapes -- partly quilted, partly not -- reminded me of a cityscape, so...I played with an arrangement, stitched it together, quilted and trimmed it down.  I then placed it on a background to see how it would look:

I rather like it -- so have plans to quilt the background separately, mimicking the quilting in the smaller piece.  Then I'll sew the 'scape' onto the quilted background, face it and add a hanging sleeve.

I'm about to do the same thing with this 'sample' I made when I attended Katie Pasquini Masopust's session on designing with line, at the online Houston Quilt Festival.  The centre piece is quilted and trimmed, and the background is sandwiched and ready to quilt.  I'm using straight-line quilting for this one, and call it "On the Straight and Narrow"...for obvious reasons... 😉

Finally, on the knitting front, I've "stopped" my December Socks-from-Stash socks by finishing the pair...

And I've started on a pair for February:

You may be wondering about the pretty wee project bag in which the yarn is resting.  Well! Socks from Stash has a wonderful habit of having a draw for a prize at the end of every monthly challenge -- and I won this little pouch at the end of November!  It's hand-made by one of the group, and comes all the way from Finland!  It arrived just in time for me to start my new socks on Feb. 1.  😊

In keeping with my plan to finish some UFO's this year -- and not just in quilting -- in addition to working (again) on my Glasgow Rose Stole, I've picked up a second unfinished wrap: the "Swan Lake Mystery Stole".  I'll admit I wasn't off to an auspicious re-start.  It's 99 sts across -- 49 on either side of a single centre stitch.  The pattern is knit on the right side; the wrong side rows are all purl.  I have about 2 dozen rows to do before I finish this section of the pattern and move on to the "wing" of the wrap.  I knit about 5 rows before it came clear to me that something was off-kilter.  I found myself putting in a life line, ripping back all of them, and starting over.  Happily, the problem is fixed, and in my next post I might have progress to show you!

Spurred on by the Polar Vortex outside my door this weekend (scheduled to last at least a week), I've also picked up a sweater I'd not worked on in years.  It's a pullover pattern from Interweave Knits, Winter 2008 (!), called "Climbing Vines", designed by Joelle Meier Rioux.  When I'd abandoned it -- sometime in 2009, I think -- I'd finished the back, and part of the front -- farther along than the photo below shows. 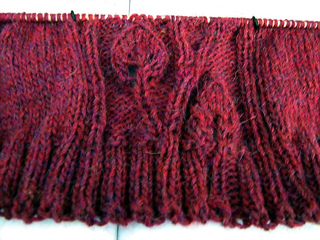 Yesterday I got busy and finished the front, so now I can go on to the sleeves.  I doubt it will fit me once it's finished, but as the late, illustrious knitting guru, Elizabeth Zimmerman (EZ) is reported to have opined: "It will fit somebody!"  It's made of elann's Peruvian Collection "Sierra" -- a worsted weight in 80% highland wool and 20% alpaca, so it's to be worn over other clothing, and it's a hand wash.  A good, old-fashioned piece!
Last but not least, I've finished the wee needle roll for my friend's February birthday, and I hope to get it into the mail tomorrow...Polar Vortex or no Polar Vortex!

You'll note some "scribbles" in black on either side of the tiny heart on the piece.  Don't fret yourselves; that's where her name is, and I didn't want it to show in case she's reading this post.
And so it goes, Gentle Readers...and so it goes.  Life in the making must include love and joy, hearts lifted, and hearts breaking.
I'm linking this with Nina Marie's Off the Wall Friday.  Till we meet again...make the One who Knows keep you safe, keep you warm -- and bless the work of your hands.

I had some of that great cat fabric, but I think I've used it all.

Your weather looks like you will be able to put those warm socks to use.

I always feel like I am right at the house going through the piles and stacks of your work, Marg... listening to the stories of why and how they were made. Sad to hear about your cousin. We have many losses in this time and as we get older, it seems the news comes more often.

Take good care during the Polar nasty and just get outside when you can... love the knitting... especially the red sweater re-start! Get on it...
Beth