I should've known that as soon as I began to talk about "hope" and "comfort" and "purpose", The Voices would show up.

You know what (or who) I mean, don't you?  The natterers -- sometimes referred to as "The Committee" -- that take up space in your brain, disturb your sleep, haunt your dreams and entice you to procrastinate because...well..."Who do you think you are?" and "What makes you think all this quilting has a purpose?"  and "Without in-person shows, what good's making art anyway?" and on and on.

They're hard to ignore.  Sometimes we might even acknowledge they have a point. 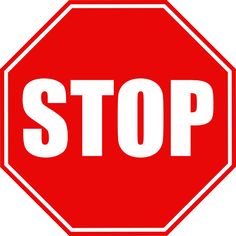 Sometimes they shout all the louder, as they have been doing in my head for the past couple of weeks (maybe longer).  What to do?!

Work with your hands.

I've been trying all of these, and in the case of the last...I've turned full-tilt into sorting, tossing, producing and finishing.

The sorting-and-tossing -- whether into the garbage or into a "give away" box/bag -- has been spurred on by Karen Brown of  Just Get It Done Quilts, who's been hosting a "De-Clutter Challenge".  I've not followed to the letter, but I've definitely got into the spirit of the event, and so got rid of simply-too-small-to-use batting scraps (I don't do post cards or Artists' Trading Cards so...out those bits go, being too small even to sew together into larger pieces).  I've a growing stack of books for our hamlet's lending library -- once its doors re-open, which I hope will be soon! -- and I boxed up and stored away the CDs of family photos, mostly created by my husband, who died in 2006.  I then bagged up a large quantity of other CDs and DVDs and took them over to our local charity thrift store.  The ones left are sorted as to genre of music, plus poetry, and technology -- the ones needed to install my photo, scanner and printer drivers if/when needed.

In the production department, I've upped my game!  I decided to set up a second sewing machine -- my teen-aged Husqvarna Lily 555 -- on the kitchen table, and I'm using it to quilt small charity quilts and to assemble Quilt As You Go (QAYG) blocks. 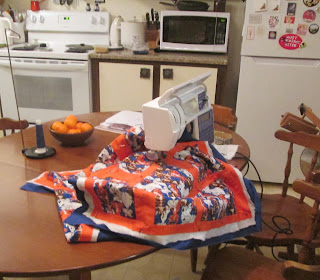 I've discovered, though, as I quilted along, that anything much larger than 40" square is cumbersome when you don't have a good working surface that's level with your machine.  I have an old 'extension' from my first Husqvarna (now long gone) that attaches to this one but not well, so it's wobbly.  I think that it'll be fine for QAYG blocks, though.

Here's my Bali Sunrise laid out on my 'design bed' in the guest room.  The first row on the left is now sashed and assembled; the second row in has its sashing pinned to each block, and will be joined up soon at my "new" work station:

"Wait!" (Ican hear you thinking) -- "You're only one person!  Why set up two sewing machines?!"  Well, Gentle Readers, for this simple reason: I want to use particular colours of thread when I quilt, whereas I'll use pretty much any colour for piecing.  Thus...I can do quilting at one machine, and piecing at the other, not having to change thread up top and in the bobbin whenever I want to move from piecing to quilting.

The exception? Larger tops that are still manageable enough to quilt myself*.  Those I'll make time and space for in my studio which has a proper sewing table with the machine lowered into it and extra surrounding table space to hold the weight of the quilt sandwich.

"Crazy Cats" -- seen in the photo of the quilting station (above) is now quilted and has only 2 sides' worth of binding to hand-sew.  It's a small quilt and will be given away.

Next up is "Bali Sunrise" and then a mini "Easy Breezy" top that I've set up as a QAYG, based on Bonnie Hunter's 2020 Leader/Ender pattern.  Both of those will be given away too.

Three more are to follow: "Broken Bricks", which is sandwiched and is too large for the kitchen station; "Off the Rails" which awaits sandwiching and might be okay at the kitchen station, and a whole-top QAYG -- a variation on a "jelly roll race" quilt -- that I'm going to call "Any String Goes!".  I've chosen backing and batting for that, but haven't started it yet, as I think it'll need the studio station to do properly.

What about mysteries?  Well, of course!  I'm nearing the finale of Bonnie Hunter's "Frolic!" from 2019, with two of the four saw-tooth borders attached and a third under construction: 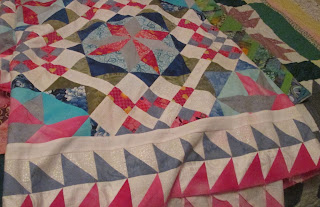 As for 2020's "Grassy Creek" mystery, I'm moving right along.
Clue #5 called for nine-patches and flying geese; here are my 'patches', but yes, my geese are finished too: 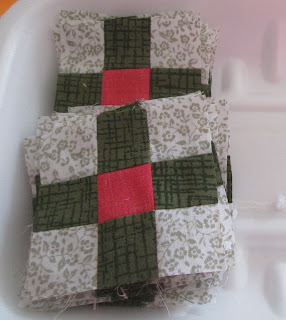 I'm currently in the midst of  Clue #6.  It calls for a variety of greys...of which I don't have much.  (I don't want to cut into my selection for landscapes.)  So...I've decided to 'mix it up' with some of the greens that are also used in the quilt.  So far, I've created ten units, shown here under construction, with many more to go!

Of course, there's always knitting...in both the "production" and "finishing" category.  My January socks are just over 1/2-finished: 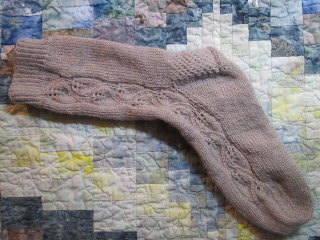 I've resumed work on my Glasgow Rose Stole which, given that I've not enough yarn to make it full length, will be more like a scarf than a wrap, but I don't mind.  It's pretty and the silk is lovely...but it's not mindless!  It's made in 2 halves -- I'm nearly finished the first -- and then surrounded by a border.  I'll have to do the border in off-white as I've not enough pink variegate to do it all:

And I've finished my Tegna cropped top!  I made it longer than called for, but it's still pretty short (i.e. to my waist, rather than tunic-length) but I like it, and will enjoy it come summer, I think:

If all that's not enough to tame The Voices, I've added a bit of meditative cross-stitch, making a small gift for a friend with a February birthday: 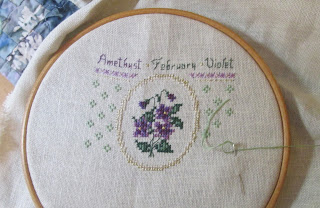 It's an old pattern -- discontinued now, I think -- from Thea Dueck of The Victoria Sampler -- meant to be a needle roll, but could become a small framed piece instead.  I'm undecided on that point, and will see what it wants when I've finished it.  I enjoy working on it while listening to a bit of Bach, or to Dean Robert Willis of Canterbury Cathedral, reading one of his stories (currently, The Wind in the Willows).

All of this seems to be working for the moment, anyway, but it's a daily rhythm that needs to be maintained, lest The Voices take advantage!

I'll close with a bit of news on the Art front:  first, tentative plans for an in-person, protocols-followed Lacombe Art Show & Sale are underway, with options should COVID require.  Possibly in late May, with hopes that warmer weather will make in-person events more likely; and second, I'm in an online Art Exhibit!  Former Alberta Premier and current Opposition Leader, Rachel Notley, hosts "Art from the Unknown" on an annual basis.  This year it's on line (of course!) and I am one of thirty-two Alberta artists selected to be featured!  You can see my entry, and that of all the others HERE.

Now...linking up with Nina Marie over at Off the Wall Friday, where she's also working out goals and hoping for future in-person creative opportunities!  😊

Be well...stay safe...take care to shut out those Voices that seek to haunt you.  'Til we meet again, let's listen to these voices instead...