Last year, I chose the word "hope" as my guiding principle/word for 2020; little did I know how much it would be needed -- and not just by me!  With all of that year's challenges, there was a global clinging to hope in the face of danger from disease, illness, death, sloppy government leadership, racial brutality, greed, and self-interest to the exclusion of others -- both from corporations and individuals.

But HOPE persisted -- and was shown every day by the heroism of health care and other front-line workers, as well as in the incredible work to discover a vaccine against the terribly contagious COVID-19.

In November, a new word came to my mind -- a word to add to "hope" for 2021, rather than replace it, and that word was "comfort".  Back then I wrote, "It's what I'm acknowledging I need in my life right now, and what I want all of my somewhat frenetic making to be about: bringing comfort."

Then just before Christmas, I wrote about "the importance of purpose".  Little did I know that shortly thereafter I'd see a post on Facebook about an advertisement -- for what I still have no idea! -- that would address this very thing: the need for a sense of purpose, which becomes crystallized in an objective that motivates, energizes and, when realized, rewards with what money cannot buy: faith, hope, love and comfort:

There are days when I, too, look in the mirror and sigh at what I see: more grey hair; sometimes more pronounced "worry" lines on my forehead; periodically blotchy complexion (I never had blemishes in my teens; perhaps it's my turn now?!)...A thickening waistline, age spots, prominent veins in my hands...

For me, right now, having amassed more original art than I know what to do with at the moment -- because my choice is in-person vending (I'm waffling about an online shopping presence) -- I am focusing on my purpose: to provide hope through comfort.

To this end I finished the wee pink tummy time blanket for the new granddaughter of my friends in Montreal -- and sent it off to her and her parents in Florida on Dec. 31. Photo at right shows it quilted but not bound; the one on the left is a detail of the quilting.

I've sandwiched and pinned a top I finished following a class on grids with Joe Cunningham a few months ago (I call it "Crazy Cats").  I'm thinking about quilting it with the same sort of 'random squares' as I did the pink quiltlets.
And I've finally finished a strip/string Quilt-As-You-Go (QAYG) top I started in Calgary in 2008 (yes, you read that correctly; it was before I moved here to my wee hamlet!)   It was a pattern and class/demo from Freckles Quilt Shoppe which, alas, hasn't existed for several years now.  It's called "Bali Sunrise" and is made with 6" blocks and sashing.  Returning to it on and off over the years (mainly off) I finally decided to a) make it smaller (54 blocks rather than 120!) and b) to ignore the lay-out of the strips as to colour and do what pleases me now. 😊
Here it is as of this afternoon -- all 54 blocks done and laid out in the way I want to join them (please don't be distracted by the quilt underneath; the blocks are laid out on the "design bed" in my guest room! 😉)

I've no real plans for this one.  It'll measure about 40" x 56" when it's finished (maybe smaller) so I expect it will join the wee pink top and the "Crazy Cats" as a give-away to a local program for new moms.
While I still have "Broken Bricks" to sandwich and quilt, and I have 3 (!) in various stages of hand-quilting, I continue to plug away at Bonnie Hunter's 2020/21 Mystery quilt, "Grassy Creek".  I'm making progress on Clue #4 (of 6 so far):

On the knitting front, I've not quite abandoned the socks-in-a-less-than-favourable-colour-way that I began for the December challenge in the "Socks from Stash" Ravelry group -- but I am slowing down.  The pattern is great but the 2.25 mm needles and the yarn in question are making this project less than fun.  I'll be giving these away! 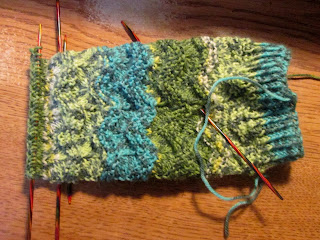 The above photo is of the first leg of "Berkshires" in Zwerger-Garn Opal yarn, colour-way, "Cameleon".  I've long finished the first sock though, and the second is approaching the same length as that shown in the photo.
While I try to knit a bit each day on the above, a new pattern has stolen my heart for the group's January 2021 challenge: 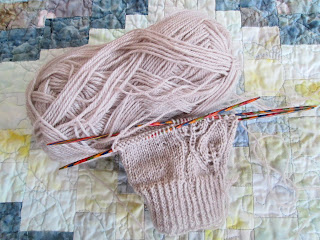 The yarn is a rather bland colour -- #309, aka "Taupe" -- in Patons Kroy 3-ply wool/nylon fingering.  I was given this or found it in a donated batch; no one else wanted it so I took it.  I tried it out in another pattern -- since frogged -- before I discovered the "Woodland Walk" pattern from This Handmade Life on Ravelry.  It's far more suited to this yarn and I'm enjoying this knit immensely.
Ahhhhhh...the comfort of having a lovely pair of socks on the needles!  😉  Though I don't wear any sort of 'brown', I also don't have many plain (solid-colour) socks, so I'll probably keep these ones.
And so it goes, my friends.  Likely many of you will think, "Same old, same old" but for this place, and this time, in a province pretty tightly locked down for another week or more -- pending review of the stats -- it's where I am.  Where many of us are.
And so I leave you with a link to Nina Marie's Off the Wall Friday, and till we "meet" again, wishes of comfort and joy...