Down the Rabbit Hole with Joe... 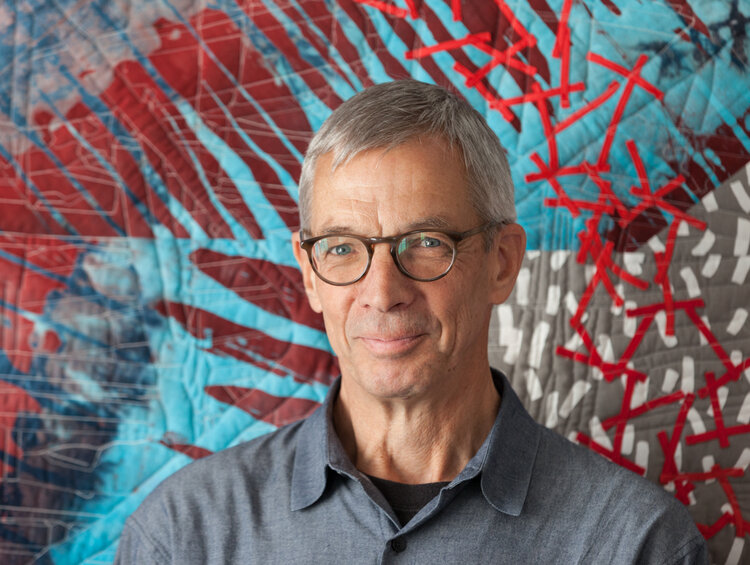 I spent a good part of last Saturday with Joe.  Joe Cunningham, quilt artist, that is.  Those of you who follow my ramblings likely know how much I enjoy his work and his teaching.  I own his Craftsy class -- which I can access once more because the new owners got their act together! -- and I've watched his appearances on The Quilt Show several times.  Since May, when he began to teach workshops online monthly, I've participated in nearly every one.  On Monday afternoon, when he did a live-online "chat" with Patricia Belyea of Okan Arts, I watched that too.  And as it was recorded, I watched it again yesterday afternoon as I was hand-stitching the binding on my daughter's Turning 40 quilt.

Yep.  I think he's great: funny, inspiring, interesting and with a quirky turn of mind that I find fascinating.  I don't understand how he thinks or sees the world, which he interprets in his art, but I remain intrigued -- so I've gone down the rabbit hole to try and find out more.

In each workshop, Joe has us make at least one item, or sample.  Sometimes they're even useful!  😉  In September I managed to make a couple such items: a small top that will become a 'tummy time' blanket, and a cushion cover.  In August, I what I think is my favourite piece thus far -- and I've just spliced a couple of batting pieces so I can quilt it.

On Saturday, the purpose of the workshop was to explore the work of an artist -- not necessarily in the textile medium -- and, drawing inspiration from that work, to make something using similar principles.  In this case, the artist was painter Stuart Davis.  Joe showed several examples of his work in a book, and landed on one -- entitled Cliche -- that we were to use for the workshop.  I confess, I preferred some of the other examples, but a class is a class...

So off we went!

I'd picked two contrasting pieces of yardage from my "inheritance": a piece of deep navy and another of white.  Both have starry motifs printed on them in metallic gold.  I had no idea what I'd use them for, so they were perfect for playing in the workshop.  😊 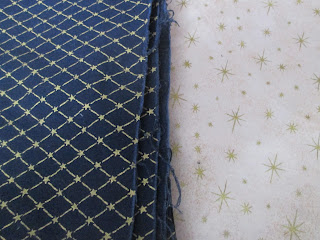 The idea was to cut one fabric into 1 1/2" strips, and the other into random "chunks", much like we'd done in the very first workshop in May.  Then we were to reassemble the strips and chunks with one caveat: you couldn't have two strips or two chunks butting up against each other.  That lead to all sorts of adventures with angles and inset seams (or not).  Not being partial to fussing, I chose the 'slice it off' method for dealing with those!

I didn't get the piece finished in the workshop time, but I pressed on, and worked on it again on Sunday, ending up with this: 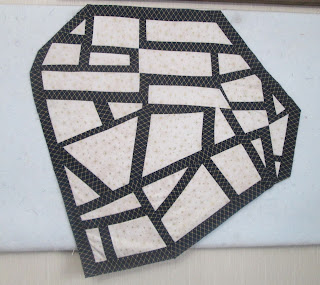 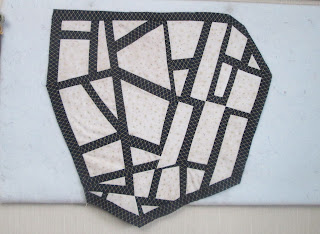 My design wall is 48" wide x 24" long, so you can see that this thing fills up a good bit of that space.  If you look closely, you'll see one tiny spot where the background (white) of one piece butts up against the background of another, but I don't care.  It is what it is.

And that's as far as I've got with it.  Working title?  Asteroid.  I know what I want to do to finish it, but I haven't come across the right fabric for a background to the shape.  I also know how I want to quilt it, but it'll have to wait till I find that fabric.  No matter; it was just another adventure down the rabbit hole with Joe!

I like these workshops because they've helped me loosen up a bit as an artist.  Someone who "sees" so differently, and is able to get his or her ideas across with humour and an easy-going style is someone whose teaching is hard to resist.

I find myself being more willing to experiment.  At the same time, I'm looking at my stash of materials differently, because I'm called on to play with them differently...and that has translated itself into new work.

I was particularly thrilled on Saturday when Joe and his colleague, Julie Silber, showed a quilt done decades ago by a quilter named Anna Williams.  Joe prefers to work with large chunks of fabric, and admitted that he tosses his tiny scraps but, Gentle Readers, I happen to love small bits, crumbs -- as you may well know.  Anna, apparently, loved crumbs too!

A couple of years ago I played with crumbs to create four "road-themed" pieces, the first of my "crumbpilations" series.

Each of this quartet is 12" square, and is now mounted on stretched canvas and framed.

Around that same time I made this piece for SAQA's Global Exhibit, "Season After Season"; entitled Incarnation to Resurrection: Reflections on the Colours of the Church Year, it's completely string-pieced from scraps:

That was a time of exploration, but in this chaotic COVID time, I've also found comfort in the practice of simply sewing together bits or strings of fabric, cutting and piecing and trimming -- and piecing some more.  That same comfort was what got me started quilting decades ago, when the stress of my husband's advancing illness was increasing, and two good friends who were quilting recommended it because, they opined, "knitting isn't enough".  (And they were right!)

This summer, I made two new art pieces from crumbs, and mounted them on large stretched canvases -- 12" W x 30" L.  (I have yet to pick them up from my framer.)

I've followed these with a couple of pieces that are going to be "soft" -- not on canvas, but hung with a sleeve and dowel.

The working title of this one is "Chaos Can Be Colourful", measuring 24" W x 33" L.  I've yet to quilt it, but I expect I'll do it as I've done the others, with straight lines close together, and I expect I'll put a facing on it rather than a binding: 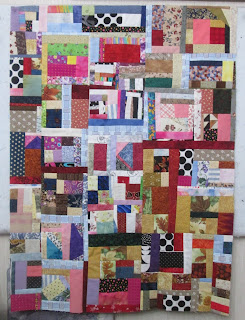 Another piece underway -- a glimpse of which I showed you a few days ago -- is on my design wall, blocks ready to be sewn together.  In the end it'll measure about 25" W x 20" L (before quilting):

Those two blocks on the right will end up somewhere else; I think the piece on the left is just the right size.  Again, it will likely be quilted with straight lines, faced, and provided with a hanging sleeve and dowel.

At the same time, I've been creating some crumb blocks that I expect will end up in a utilitarian quilt -- with sashing and borders; the stack of 8" square blocks numbers 17 right now, and there are more under construction: 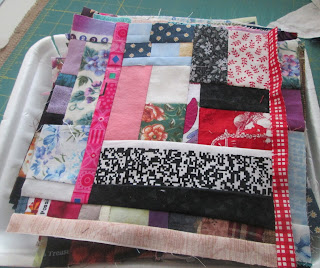 In her interview/chat with Joe on Monday, Patricia Belyea noted that Joe once referred to himself as 'a quilt maker' but more recently, has begun to call himself an 'artist' or 'quilt artist'.  Thus ensued a conversation that really struck a chord with me.

Just two days before, during the workshop, Joe and  his guest Julie Silber had had a similar bit of conversation about quilts and art.  Julie opined that "not all quilts are art; not all photographs are art -- and not all painting is art".  So...when a similar conversation happened in the Monday interview, I was excited.  Joe said his "aha" came when he realized that all of the quilts he'd made over the years were really "art projects".  That's when he also moved from copying the work of the quilters of yore that he admired, into creating quilts from his own unique and original ideas about art and the world around him.  He was particularly inspired by this quote from artist William T. Wiley:

I think art should be more and more amoral, a realm of exploration. Especially in school, if you could just get that idea across to people, it just means a whole threshold of getting into art, or the aesthetic experience, or awareness. Just give people a chance to go into it and really flesh out a lot of things and feel themselves in it. -- from Richardson, Brenda, "I Am My Own Enigma", published in Wizdum, University Art Museum, Berkeley, CA, 1971, p. 10.

I continue to chew on this thought.  Note: the word Wiley uses is not "immoral"; it's "amoral", which means 'not concerned with the morality of a thing' -- which in this context I interpret as "being completely objective", giving one the freedom to explore an idea or concept in an original way as one works it out in art, music, writing...etc.

My chaos pieces are just such an exploration, using the arrangement of shapes and colours of fabric in a way that attempts, for me, to bring order to the chaotic circumstances in which I find myself both in my small corner, and in the wider world around me.

I told you Joe had taken me down a rabbit hole!  😉

What are you exploring in your work, as you make choices about colour and shape, quilting design, threads, embellishments and pattern?

I'll leave you with that question, and links to both WIP Wednesday over at The Needle and Thread Network and to Nina Marie's Off the Wall Friday.

Whatever you're creating, whatever you're pondering, Gentle Readers, thanks for stopping by -- and may you stay safe and well!  😊

Seems are both returning to our early art quilting roots. It has been over a decade since I returned to my love of playing with shifting values. I made the first piece in 2000, but didn't flesh it out to a series until 2005 and 2006. By 2008 it seemed to have run its course. However, periodically I dip back in for one more attempt. It is my comfort zone, my home base. Just as your work is a return to when your husband was ill. My work is a return to a time when my daughter's and my relationship was strained to the max. Between COVID and the US political situation, I'm strained to the max once more.