"The world is too much with us" wrote poet William Wordsworth a very long time ago.  Very often these days, I feel very much the way he looks in the drawing at left -- and I know I'm not alone, not at all.

A couple of weeks ago -- a few days before I wrote my last post -- I received word that the dear elderly friend who'd commissioned the bed-cover-from-an-art-quilt, "Prairie Quintet", died in mid-May, at the age of 99.

In her obituary her doctor was thanked for his care over the prior two months.  I'd written her at the end of April -- a practice of mine for decades now, as her late husband's birthday was May 1 -- so she'd have received that note.  I've never expected her to respond because of her advanced age, but she usually did within a few weeks, and now...

I am thankful for her friendship all these years, and am comforted to think she may be in a place where she is again well and surrounded by those she loved who'd gone before.

On the heels of that came the murder of Mr. Floyd in the U.S., bringing with it demonstrations, responded to with government-sanctioned violence...going on for almost two weeks now.  All in the midst of an ongoing global pandemic...

It has been a charged and grief-filled time.

Juggling anger, grief, tears, uncertainty, I've managed to put one foot in front of the other, thanks to having to mow a lot of grass -- twice in the last two weeks -- and to the self-imposed discipline of reading (Psalms -- one a day; The Genesis Trilogy by Madeleine L'Engle (she of A Wrinkle in Time and The Crosswicks Journals); and gardening memoirs), as well as the ongoing work of my hands.

In the yard -- besides mowing! -- I've been watching my seedlings pop through the earth in my raised bed: lettuce/mesclun mix, zucchini (2 hills), broccoli and Brussels sprouts.  And in the flower beds, the Bachelor Button seeds seem to be growing a good 1/2" a day!  Basil and cherry tomatoes too.

Late last summer I spray-painted an old steamer trunk -- which I'd (sadly) allowed to develop rust (😟).  It's now a wild shade of purple, courtesy of Rust-Oleum -- "Grape" colour-way.  I don't generally like to use spray cans but this is so much easier to use and to clean up after -- and if I am careful, the can is easier to dispose of than a regular can of paint, plus brushes.

I've put the trunk on two-by-fours in the new part of the yard, near my budding honeysuckle.  I put a folded plastic piece of tarp in the bottom, plus 3 recycled styrofoam meat trays, and on each tray, a large plant pot, recycled from prior years when I brought home roses for the flower bed: 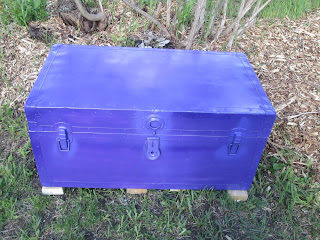 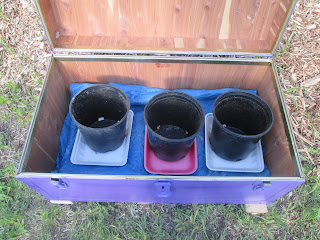 All I need now is some plants!  I'm thinking annuals...perhaps pansies or marigolds or whatever.  The challenge will be to find them, because they are in rather short supply this year.  One nearby nursery has already closed (they usually are open till at least the end of June if not longer), and another has a very picked-over selection -- mainly vegetables (except tomatoes).  I'll keep looking...

In the sewdio, I've been constructing a gazillion 1/2-square triangle units for Round 4 of Bonnie Hunter's "Unity" quilt.  The pattern is now complete, but I'm only partly there (it has 8 parts), and I'm taking my time.  It's official: I've decided to name it "Star Crazy"!

My sister visited for an hour or so earlier this week -- the first time we've felt it was safe to get together -- and she said she really liked it, so she may end up with it eventually.  Although I'm enjoying the process, this particular pattern is not really my cup of tea, so I am glad it looks like it has a home to go to once it's quilted!

At the same time, stitching continues on the Toronto Sampler from Jeannette Douglas Designs.  I ordered bell pull hardware recently, and have just received word that it'll be in the post tomorrow; though there are postal delays due to COVID-19, it's only coming from Calgary (2 1/2 hours away) so I expect I'll have it by the end of the week.  I must keep plugging away at this because the gift has to be finished and mailed in early August.  Here's what it looks like right now, with fourteen of twenty-one "lines" completed:

In all of that, there have been stirrings -- nudges to 'play' more, to loosen up in the hopes of returning to making some original work.

I took a leap and signed up to take a webinar with one of my very favourite artists -- Joe Cunningham.   Yesterday he gave his first "Zoom" webinar: "Quilt Freedom" -- and it was a tonic!  I can't say that I'd adopt this style of free piecing, but I can say that I enjoyed it, and that it might just be an approach I'd use in the future now and again, should a subject call for it.

I decided to warm up for the class by digging into my scraps and creating a few 'crumb' blocks. I'd made a few some months years ago, when I thought I might like to make an entire quilt of them -- and ended up turning them into a quartet of abstract pieces I call "Crumbpilations".  After that, I went on to other things.  Yesterday, while waiting for the class to begin, I dug into my scraps and made some more.  I now have 3 that are 6 1/2" square, and many more 'under construction', as I used them as "leaders and enders" while I sewed what Joe had us work on during the webinar. 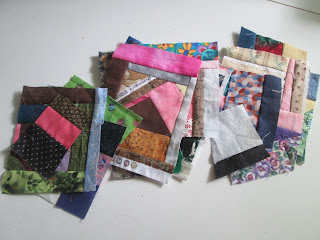 The focus of the class was how he uses the inspiration of old quilts to create a new expression of the ideas behind the blocks used in them, how he chooses his fabrics, and how he puts a new quilt all together.  The pattern he used for the class looked like a star sitting on a chalice, but I've located a version of it -- complete with free pattern, called "Vase of Flowers" -- for obvious reasons... 😉

I was so engrossed in the process that I didn't take any photos as I went along, but here's what my 'impression', using Joe's approach, looks like:

I'm undecided about 'squaring up' the piece by dealing with the angle of the right side...I kinda like it.  I thought too that the pot/vase is a bit over-sized, but if I make it shallower, it will be overwhelmed by the 'plant'.

Joe's idea was to make a piece about 36" square but I confess that, while I continued to slice fabric with relative abandon, as the afternoon wore on (long after the 3-hour class finished!), I found myself cutting smaller pieces, and then trying to be more focused on the design/lay-out.  Hence the narrow side strips, which are far more deliberate than the rest of it.   Joe did say that while he starts out not having any idea what a piece will look like, as he works into it, and it starts to take shape, he does become more intentional about the work -- so perhaps I wasn't so far off the mark after all, even though it's less than half the size Joe had in mind for us to make.

The class was an apparent success, so Joe is setting up to teach one per month -- usually on the first Saturday (except in July, when it's moved from the 4th to the 11th).  You can find out about it HERE.  I'm not sure I can manage it yet (the CAD exchange rate is a factor), but I'm thinking about it, for sure.  Joe says he believes that quilting is a way to 'be free' -- to find freedom of expression, because there really are 'no rules', and I like that very much.

I've always been a rule-follower, but if there are no rules, I don't have to feel guilty about breaking any!

I've longed to bring more abstraction to my work; I'll only know if I'm "there" when I can take what I'm learning and use it more than once.  Not simply in response to a class, but in an ongoing way, fitting my style (not "being Joe") but with a freer, looser approach.

I'm linking this week to Nina-Marie's Off the Wall Friday -- wherein this week she too talks about abstraction in art, but from a different perspective than Joe.  Check it out...and see what you think.

And may the coming weeks find you well, safe and ever more able to find 'comfort and joy'.

Wild week here as tornado warnings and wind. rain, and hail mess around with garden plans. But what a super trunk! I have some of Joe and Gwens books from long ago and still like their styles! that is a great blue pot! Rules! Schmules! Lets please ourselves!

I'm so sorry for the loss of your elderly friend. I am glad she was able to enjoy the masterpiece you created for her. On a happier note, I love the purple trunk! What a good idea. Joe Cunningham's class sounds interesting. I very much like what you are doing with it. I have been free-piecing for years. All my backgrounds are free-pieced and my few abstract pieces. Some artists who have inspired my free piecing are Gwen Marston, Jean Wells and and Rayna Gilman. That said I think you know what to take from the class and how to incorporate it into your work. BTW, I think the vase is just the right size.