I finally got it out of my system.  The grief and stress, that is.  Well...maybe not all of it.  But I was induced compelled propelled back into the Sewdio over the last couple of weeks to make something to deal with at least some of what's been going on.

The seed of this piece was planted in January, when the Iranians shot down a Ukrainian passenger plane carrying mostly Canadians.  Flight 752 was on its way to Europe; from there, these passengers could connect to flights home to Canada -- homes from coast to coast, including several from Alberta, the province in which I live. I got a picture of what I wanted to make and splurged on Tussar silk fabric from MAIWA in Vancouver.  I found a small package of wool batting and a piece of linen for the backing, on sale at a LQS.  I had silk and cotton thread on hand.

And then it sat.

This often happens, because it takes some time for the "vision" I have in my head to work its way out.  This can take weeks.

This time, this process was rudely interrupted by COVID-19.  I went into a creative slump and couldn't produce anything original, let alone work out how I wanted to do this piece.  I knew only that I wanted it to be whole cloth, and have images of candle flames, initially covered with the same number of flames as there were passengers and crew on board that tragic flight.

As COVID-19 continued to take its toll, I watched with increasing despair the short shrift it was being given by the U.S. government, even as our own federal government struggled and worked hard to forge a partnership with the provinces and they, in turn, with counties and municipalities, to keep abreast of it, and to deal with the economic fall-out as best as possible.

Then came the murder of Mr. Floyd, and the subsequent self examination of our own police forces, our own descent into racism over the centuries -- from when Canada was a British colony, which of course includes the horrific behaviour of colonization, and so it goes, down through time, as we work to realize, acknowledge, rectify, reconcile and make reparations.

And the evening I published my last post, I got a call from a friend of my son: he was in the hospital.  He has mental health challenges that apparently were exacerbated into a full-blown "episode" -- by a prescription he was taking to help him stop smoking.  Ten days of care, change of medication and psychiatric counsel -- and he was able to go home.  I was unable to visit but we managed a phone call a few days before he was discharged, and we have connected online since.  I am hopeful he will remain well, but it's not been an easy time, to say the least.

The result of all of this angst is And It's Only June: A Reflection on 2020

Here are some detailed shots:


I'm not a skilled free-motion quilter.  In fact, I don't really enjoy doing it.  But try as I might to think of other ways to quilt this work -- including by hand -- it demanded FMQ.  Sometimes you've just gotta do what the quilt wants you to do.  It's far from perfect -- there are a couple of puckered places -- but I don't particularly care.

I used 3 colours of silk thread on the top because I didn't have enough of a single one of them to do it all.  The back is quilted with cotton thread because the backing is linen, and the thread matched.  The quilt is finished by folding the top over to the back and hand-stitching it down as a 'self-binding'.

I have no idea what I'll do with this piece, except that I know I'll show it at the Lacombe Art Show & Sale in April 2021, God willing.  It's not going into a competition!  (I admit I was originally enticed to enter it into SAQA's call for "Light the World", opening in the fall, but the techniques are just not perfect enough and I won't "fix" it -- or make another.  This one's done.)  Meanwhile, I'll store it flat and hope for the best.

All is not gloom and doom, however.   I've had great joy from my garden...

And I have made more progress on the Toronto Sampler,
shown here before I began the last, deep section... 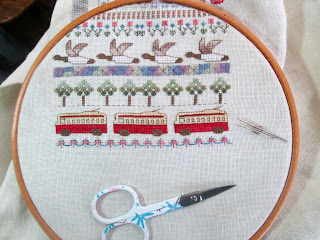 Meanwhile, the first of the June Socks from Stash Challenge socks is finished --
and I'm roaring down the foot of the second!

What with mowing The Estate, weeding the garden beds, cleaning out the eavestroughs and re-sealing around some of the vents on my roof...I am keeping fairly fit and focused.  Almost all the stitching takes place in the Outdoor Studio, listening to the birds and the hum of other neighbours at their labours.  This keeps me away from the computer; more especially, it keeps me away from bad news.  We've had far too much of it -- and it's only June!

I'll leave you with a Happy Father's Day wish for those of you who have fathers or are fathers...and with a link to Nina Marie's Off the Wall Friday where this week...she's encouraging theft!  😉  Stealing like an artist, that is!

Wherever you are and whatever you're about this week, have a good one!
Posted by Margaret at 12:04 pm

I love those socks.
I am finding two mind sets, right now. There are those who have slowed down, hunkering in for a long confinement. And there are those who think everything should just return to normal, no matter what the consequences. Hard times for all. Your new work expresses all of that,I think.

Sometime the ' doing' of it is the purpose of a piece, our very personal, private and unique interaction with the materials, method, our creative muse and our hearts and hands. It's not what it looks like to our possibly critical eye, but what it holds that is its purpose. I think it would have taken a great inner push to shift feelings and the emotions it represents from the ethereal to the physical. Mission well accomplished

I understand the angst of starting, but you have made your way into a decidedly important and beautiful art quilt - and yes, you may have misgivings about an entry into a SAQA show, but keep in mind that perfect stitches are not what art quilt curators are seeking - it is the value, investment, and the thought process/handwork (yes, FMQ is handwork!) that goes into the piece.

Celebrate your storyline, the time of our lives that is documented here and if you decide, and only you can, let it be on its way to inspire and light a series of thought-provoking conversations along its way!

I personally and very moved... thanks for this post! I hope your friends son is OK - I live with daily in my home. Blessings your way!

Margaret, you said it quite eloquently "Sometimes you've just gotta do what the quilt wants you to do." You were having a conversation with the quilt. together using stitch to express your feelings. Don't hesitate to enter it in a SAQA show. It is powerful in its peacefulness and its messages.

Love the posies in trunk. Your garden is lovely. I will add your friend and her son to my prayer list.