The past several days have been "iffy" as weather goes.  Sunday was the loveliest -- and it still included clouds rolling in and out and around the place, with threats of thunder storms.  I spent the afternoon weeding the veggie patch at my sister's cottage, dead-heading some of her peonies and ensuring her tomato plants had TLC.


Though she's taken care to bring in manure and compost to enrich her patch, she still grows a mean crop of chickweed!  It took me a good two hours and then some to clear it out (and she'd already done around the lettuce and zucchini the weekend before!)

The great thing about the cooler, wetter-than-expected weather (aside from the fact that it meant I didn't have to deplete my rain barrels by watering my own gardens) is that I didn't feel guilty about staying inside and tending to the Wall-to-Bed quilt.

Following on from Saturday's work, I sewed all four rows of the "sky section" together:


On Monday I set to and created the "bush" section.  This was a case of 'one step forward, two steps back'.  It was tricky to make the blocks to include both sky and "bush".  Instead of four rows of four blocks each, I was using one row of three larger blocks.  Instead of working right to left, I chose to work left to right...after I realized I'd messed up the centre of the three blocks.  Sigh.

I realized that to get it right, I had to start with the highest bit of "bush" -- the block farthest left.  Using that as an "anchor", I made two more blocks, moving "down hill" as it were.  In the end it looked like this:


That done, I moved on yesterday to the "earth" (ploughed field) blocks, and finished them today -- two rows of four blocks each. 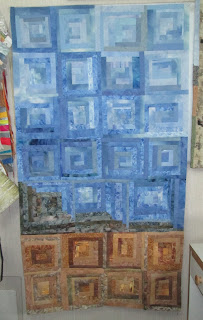 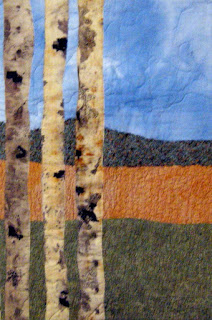 Comparing the two...can you see where I'm going with this?

Yesterday I visited my long-armer to pick up the quilt I've made for my nephew's birthday...the one I made from red, white and black scraps as a Block-of-the-Month using a modified version of Edyta Star's BOM for The Quilt Show in 2018.

Well...considering dear Sylvia (my long-arm quilter) is going to quilt the Wall-to-Bed Project quilt, I took it with me to show her.

Turns out she's a fan of Katie PM (tell me now, who isn't -- once they've seen her multi-faceted wonderful approaches to quilting?!) and she's excited!  She's got one of Katie's earlier books and has now been motivated to look up Artful Log Cabin Quilts...so she can think ahead to when she'll be quilting the one I'm making.

Ya gotta love it, eh?

So...it's Wednesday evening.  Tomorrow I work at The Shop -- a chance to knit a bit and take a break from the sewdio.

Friday = grass on the Wall-to-Bed project.

I leave you with a link to the WIP Wednesday blog...and a wish for a happy and creative rest of this week.

WOW! Truly, what's not to luv? I think I have most of Katire's books, one I bought twice. This one is winging its way to me. I didn't think I needed the dvd but I do so luv this technique. Now to get my yard work done!

Marg,
You never fail to inspire and delight us all... LOVE where this quilt is going and the sky, hills and plowed fields are awesome! Have a good weekend and don't work too hard - make time to love what you do, but time for YOU to just chill as well. Summer is short!
Bethany

Margaret, it is a delight to see this work with log cabins and landscape all mixed up. I love it.

Hope that you know about the SAQA show for Canadians only - Colour With a U - and that you are considering entering.