I know...it's been almost 3 weeks since my last post, and over a month since I posted about what's happening in the sewdio.  Time to rectify that!

I'm still on a Finishing Frenzy -- trying to get Unfinished Objects done and dusted!  Most of these are knitting related, to whit:

This tiny cardigan got it's buttons and was put in the mail for a new baby cousin in SW Quebec.  It's a 12-month size, and he's just turned 5 months, so I hope he'll be able to wear it for more than five minutes!


I also finished a cardigan so old that I didn't get it into my Ravelry records.  I made it shorter than directed, simply because I made it in a slightly lighter weight, and I'm a short person.  Called "Round Trip" it's featured in Knitter's Magazine #72 -- the Fall 2003 issue!  At present I've not photographed it, but I'll tell you...it sat for years (I brought it with me when I moved here in 2008), when all it needed was a few inches and then the cuff on the second sleeve.  And at last...it's got them!

The "Spectacle Quilt" (pattern from "We All Sew") is now quilted and has it's binding on -- I chose the same yellow as the zinger because...well...truth be told, it's what I had enough of to work with!  I have to hand sew the binding onto the back.  The baby for whom this is intended (another Eastern Canada cousin) is due...momentarily.  I hope to get the news before I finish the binding so I can put his/her name on the label.

Finally, I finished a pair of finger-less mittens for The Shop, to be used as a sample whenever we get the delicious yarn they're made in:

In the sewdio...I've been playing with more inspirations -- from Susan Lenz and Cas Holmes.

Susan wrote a blog post last month about her button collection and how she felt compelled to use more buttons in her work.  To that end, she created some rather large pieces (30" x 38" or so) and framed them.  She called the series, "Things Kept".  Now, I'm pretty gob-smacked by all of Susan's work, and she's so prolific she makes many of us look slothful, but I have to tell you, these pieces captivated me.

Though as you know from some of my earlier posts, Gentle Readers, I struggle with collage work, I've been longing to become more relaxed with this, to just dig out paper and glue and thread and floss and fabric and "stuff" and get on with it!

I also wanted to make a wee piece for the up-coming SAQA Spotlight Auction at this year's conference -- and I often take this as an opportunity to experiment with new techniques.

I began with this piece, which turned out to be too small for the Auction but just right to become a new 'mini' for (I hope) some future buyer:


I decided to try a second in a larger size, using more of the same materials...with a bit extra detail.  It's still on my design wall, needing a facing -- and it may end up mounted on painted stretched canvas.


With this practice under my belt, I decided it was time to return to the Auction piece, and was happy to get the size right this time:


Next up, I auditioned different fabrics etc. for a fourth piece, now finished except for sewing down the binding (which matches the background), but here it is, just taking shape on my cutting table:


Cas Holmes' new book, Textile Landscapes, which I may have told you I received as a birthday gift last fall, calls for practicing with layering in 'dry collage' and then, in practice, attaching layers with gel medium and/or stitch.  She does so in a remarkable, loose way.  Having created rather orderly, formal collages, I thought I'd try to loosen up a bit more.

I took a length of a synthetic sheer that I had in my stash, and applied to it layers of linen that I'd stamped and/or scribbled on (credit to Valerie Wilson and Susan Purney Mark for encouragement to do those things!).

The results are...ummm...rather mixed, to say the least.


I'm undecided about these -- whether or not to add stitch or just file them "as is" in my 'samples' binder.  I think they have rather more glue between the layers (even though I diluted already-liquid gel medium with water), so any stitching would need to be by machine.  You can sort of tell I was in a 'landscape' mode when I played with this stuff, but it's not based on any particular scene.  Time will tell, but I'm thinking 'funky' landscapes aren't my style!  Still, it's good to have the inspiration (i.e. the book) to draw from, from time to time.

There was a kind of 'release' from these experiments, so I was able to return to creating pieces in a style for which I'm better known.

First, another new 'mini'.  I started by painting some tea bag paper to create a 'moon'. 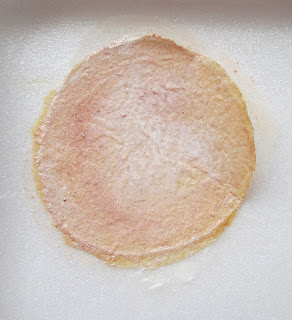 I then backed some eco-dyed silk (from my friend arlee) with fusible web, on which I'd loosely traced trees from a wonderful tree stencil that I bought somewhere.  The moon and trees were fused onto the same background as "New Directions 3", and thread for quilting the trunks was auditioned: 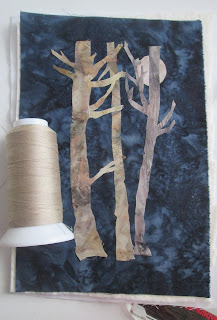 Once the trunks and background were quilted, "snow" and "fog" were added...and the piece was ready for its mat:


I've finished off this period of "MORE" with another, larger piece -- one that I've carried around in my head for a good year now.  It's based on a photo of a tree, bare of leaves, that's one of a small group on the edge of my favourite walking path around Cranna Lake in Lacombe.  It's a good thing I printed a couple of it -- because I can't find the photo to show you!  (I can, however, take another next time I'm by there, in the right season.  Sigh.)

I beavered away on this one without taking any process photos either...so here you have it:

And...so now I've caught you up on MORE in the studio for this year so far!   As Madeleine L'Engle wrote about writing, and which I paraphrase here...

It would appear that once I 'got out on the other side of the thinking, the emotion', I could give birth to January Moon and In the Bleak Mid-winter.  Nina Marie's taken a creative day this week -- and I'm betting she's got something brewing that's on the other side of both 'the thinking' and 'the emotion'.  I'm linking to her "Off the Wall Friday" page...and leaving you wishes for a creative weekend.

What are you birthing in your sewdio?

This reminds me of the monthly and weekly collections that carol showed us. Some she liked, others not, but she grew and expanded creatively with each piece. Happy birthing and thanks for sharing the journey along the way.

Loved having a visit this post with what you have been up to since the turn of the New Year and the small artworks that have evolved in the studio are all terrific - good starts on the Cas Holmes inspired pieces - don't give up!
I am particularly drawn to In Bleak Midwinter...

I am working on pieces for the Kingston and Quinte Fibre Artists shows (Feb and April) and hand stitching into my SAQA Spotlight piece. Ticking off two birds with one quilt - for the KFA "Quote" challenge for 2019 and if it doesn't sell, it will go off to the SAQA Benefit Auction. Otherwise - I will make another.