Because It's Been Long Enough

I confess, Gentle Readers, that I've thought almost weekly about posting, but have, instead, used the time for MORE studio work -- and other things.

So this post will be a bit of a catch up, with lots of photos.  I hope you enjoy it!

The Finishing Frenzy continues -- especially on the knitting front:

In February, I finished this jacket which, my having made it much shorter than the pattern -- due partly to my short stature and partly to insufficient yarn -- is really more of a long shrug:


The fact that I was working out of Knitter's Magazine, #72 from the Fall of 2003 should tell you something -- but I'm not sure what!  When I'd picked it up again, it needed only 2" more and then the cuff of the second sleeve!  It's knit in one piece and has no sewing -- except the ends -- so why it took me 16 years (give or take) to finish is anyone's guess!  Still, it fits, and will make a lovely spring jacket. My favourite colours, too!

At the same time, my "purse knitting" (also known as 'what to knit while waiting at the train crossing') was finished:

It's gone to the charity tree at church, and will likely be followed in a few months by at least one more, as I have another 2 balls of this yarn in a slightly different colour-way.

My new "Purse Project" is a pair of lined mittens -- a commission from a friend from church who's worn major holes in the ones her late mother made her, because she wears them over sturdy gloves when she walks her dog!  I've had to use the mittens as a model, and in conjunction with "The World's Simplest Mittens" from Tin Can Knits, I'm doing a new pair in the grey Berroco Vintage DK yarn she chose (colour: #2107 - "Cracked Pepper").  I just cast on, on Saturday, and it's a 3" cuff to start...


On the quilting front, the "Spectacle Quilt" is on it's way to Baby Emory back East now. Here's a photo of it, post-laundering -- just a section.  It finished at about 54" square.  Used up a batch of charm squares, some left-over backing fabric as the white background, and other left-overs for zinger and border:


As for UFOs...I've plumbed the depths of a Quilt As You Go (QAYG) project I began when I lived in Calgary.  From the documents and pattern, I took it at the now-closed Freckles Quilt Shoppe in the winter of 2006 - 2007.  It's called "Bali Sunrise"; when I opened the box in which I'd stored it, I found the mother lode of fabulous batiks -- strips and backing squares cut, metres of uncut fabric, a bit of batting, and a dozen 6 1/2" squares done.  The pattern calls for 120!  Whether or not I'll get there is anyone's guess, but by the end of Friday afternoon, I'd prepped the backing/batting for another 20, and finished six!


Now that I have 18 of these, I could put them up on my design wall, but...it's preoccupied with this: 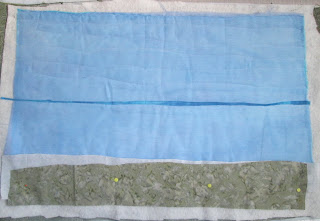 Say what?  I'ts a quilted sky/horizon/lake, with a bit of beach and beach grass in the foreground.  The sky is two layers: a light gauzy fabric I dyed turquoise (too turquoise), over which I fused a sheer fabric I painted a sky blue.  The effect is great movement, and just the right colour.  The horizon is a very thin slice of fabric left over when I dyed the sky for "Sometimes You Can Walk on Water".  The foreground fabrics are commercial ones, which after being attached to the background, will be thread painted, and then...there'll be an addition that -- if I can get it right -- will make the scene:


I'm making it with hopes of entering it into a major Canadian competition (the one that turned down "Sometimes You Can Walk...")...but it remains to be seen.  That table has to be right...or the entire thing will flop!  Quilt design prayers appreciated!  😉

What else have I been up to?

Though I've yet to finish "New Directions 2", I have finished 4 and 5 in the series.  I've mounted them on painted stretched canvas and plan to put them in floater frames.  The buff material you see behind them in the photos is carpet -- I photographed them from above on my living room floor!

These are rather fun to do -- who knows how many more reside in my brain?  The plus is that they're helping me use materials I wouldn't put in landscapes!

Speaking of which, I am still enjoying the occasional cup of tea.  I've discovered a new version of Tetley's black tea -- called "BOLD" -- which I really like.  If you're not careful, the cup you brew can look like coffee -- it's that dark!

Anyway, I amassed enough bags to make a small piece in a series I'm loosely calling "Mother was a Lady", and this is the first in that series that will be constructed as the mood strikes.

I began by layering the tea bag paper over Stitch Witchery (akin to Misty Fuse), covering the paper with white tulle, fusing the lot and quilting it down.  I then trimmed just the one side with a lace remnant I'd cut out:

These are photos of the unfinished piece.  I've now added blanket stitch -- by hand, using silk floss in a creamy colour -- around the edges, and embroidery and beading.  I want to mount this one on canvas too, but at the moment don't have one quite the right size.  I'll be going in to Red Deer in about 10 days and will look for one then.  Stay tuned for final photos!

Last but not least, in the spirit of MORE (the word that chose me this year), I've created MORE SPACE in my sewdio by reducing a great pile of clutter.

I have two bookshelves along one wall of the sewdio.  One is a faux barrister's book case -- tall, with glass doors.  The other is a low case from IKEA (one of the Billy series, I think).  Just two shelves -- but with a row of boxed magazines lined up on the top.  And on top of those magazines...there were heaps of notes, drawings, recycled plastic laminate used as templates, photos, sketchbooks, other books, and miscellany put aside to be "finished some time".  Aaaargh!

When I knocked off a pile of the stuff for the umpteenth time, Saturday, I decided enough is enough!  And I got out some page protectors, a couple of binders, and a bag to hold recycling and went to work.  I ended up with two binders: one containing materials from classes on Modern Quilting (Craftsy, with Weeks Ringle), on Improv quilting (Mod Meets Improv with Elizabeth Barton) and Abstraction (Abstract-a-licious with Lyric Montgomery Kinard); and the other, chock full of inspirational photos and "patterns" I made for pieces thus far -- to be used for future reference.  Duplicates and uninspiring materials when into the paper recycling or the garbage.  Smaller photos got pasted into a sketchbook with relevant notes about the planned piece(s).

What a weight lifted!  Now I have a small sheaf of photos set aside for new work, and the rest is neatly away, where I can refer to it if I need it.

And so, Gentle Readers, now we're all caught up -- and I can get back to working on that landscape and the Challenge of the Picnic Table.

I'm belatedly linking this to Nina Marie's Off the Wall Friday, and wishing you a creative week ahead!

You have some interesting projects, on the go. I look forward to seeing your progress on them.
I always find the papers that get saved interesting. I have a new policy lately of putting a lot of them into the recycling, because I probably couldn't find them if I ever decided to do the project.

My goodness, you have been busy!! I always enjoy seeing your projects!

Love the shrug - beautiful... and the mitts will be a blessing for your good friend. I have a small version of 'Sometimes you can walk" from the Lincoln SPOTLIGHT Sale and love it!
Great that you have the new binders all set up and have found that terrific collection of fabrics and blocks - don't set it back on a shelf - get working - an hour a day.

Talk to at ZOOM meeting soon!
Missing your smile!
Bethany

I, too, luv the shrug. I also just luv your small art projects. You have been busy and no doubt happy.
I am still mulling over my blogging future. Can you tell me what format you've been using and how it goes as I am hearing much frustration with blogger?