In my last post, I mentioned that I was going to visit with Mali Doktor, current President of the Alberta Society of Artists...and with Andrea Hatch, owner and star framer at her shop, Cabinet of Curiosities in Stettler.

Well, those meeting happened -- and left me with heart pumping, eyes shining, brain spinning in a gazillion directions about the pieces that need to be and will be made in the next several months.

First, the ASA.  Mali gave me my 'board' (resembles a canvas except that it's made out of wood) on which I'm to mount/create something "in [my] chosen medium".  It's 10" square.  The finished piece will be my contribution to a fund-raising auction event entitled "100@100".  That's me in the pink (!) with Mali in the right-hand photo.

I've never worked on a 'board' before so have to pick one up on which to practice before I make the final product.

I have it in mind to do something similar to what I've been doing on canvas -- in a much smaller size (5" x 7").  I picked up the first three finished ones from Andrea (my trusty framer and mat-cutter) yesterday.  Here's just one example: 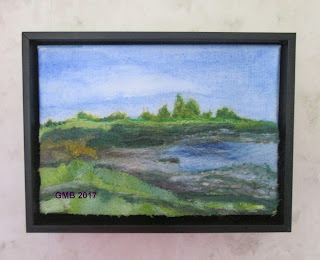 She can produce 4 of these frames (with a bit left over) from one "stick" of moulding; the same would be true if they were 6" square.  Thus she could get two out of one "stick" if they were 12" square...and so on!  At the price she is giving me, I would be foolish to try to reproduce them myself.  What a blessing she is!!  Once I'm back from my Scottish holiday, I hope to create a good supply of these over the winter, for sale at the Lacombe Art Show in the spring (April).

Meanwhile, Bonavista Fine Art in Sylvan Lake is having its close-out sale, and I've given permission for a modest discount on my work.  Anything not sold will come back to me after September 30, when its doors are closed.

There's a bright side to that...because I've been booked by the LQS in Stettler (where I generally buy my backings and batting) to do an Artist's Talk and Trunk Show on the Saturday afternoon of a quilt retreat weekend.  Caroline, the owner of Homespun Seasons, has wanted me to do this for some time now, and seems to think that though Stettler is in the heart of what I call "Bed Quilt Central", there will be an interest in the whole process of coming up with original designs.  As for me, I look forward to any opportunity to show my work.  She wants me to include MOB I and my books...and will permit me to sell the books, given that the proceeds go to JDRF and Diabetes Canada.  So...one can only hope!

You can see I've much to think about and prepare for in the coming months...but my focus right now is getting ready to leave for the Celtic Quilt Tour to Scotland!  I fly out of Edmonton with my friend and colleague, Mary Wilton, on September 11 and will be touring there through the 28th!!

I decided that being away from the sewdio would make this the perfect time to take my Husqvarna Lily 555 in for her annual "spa treatment" at Red Deer Sewing Centre...so that will happen on my way to work at The Shop today.  That said, I just had to keep working her till bed-time last night...putting together blocks for what I'm calling "My Quilt". 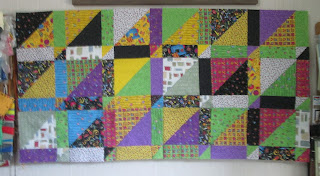 All in all, I plan for it to be 8 blocks per row x 10 rows (i.e., 80 blocks each finishing at 8" square) -- plus borders.  I doubt that I'll try to quilt it myself, but I've had fun playing will all these brights, knowing full well the finished top will look nothing like the original pattern.  The goal is to have a fresh new quilt for my bedroom, and in that, I think I'll succeed!  😊

Continuing my Utilitarian streak, I've now finished two dishcloths from stash cotton and have cast on a third, aiming to replace my sad and sorry collection with at least a half dozen new ones.  The patterns are all mysteries from an old Ravelry KAL (2009/2010), so I never know what they look like till they're finished.  Here's the first one -- from a pattern from the middle of September 2009:


Yes, it's reversible -- and yes, it's a diamond...
or rather, diamonds within diamonds!

The yarn is Nova Four Seasons Cotton from Diamond Yarns (I'm not kidding!) in colour-way #25.

And that's all the news from the Sewdio for today.  I may squeeze in one more post before I travel; we'll see.  Meanwhile I'm linking up with WIP Wednesday over at The Needle and Thread Network, and wishing you a great rest of the week!

You are pretty in pink and also basking in its glow. Good for you!!!