It's Never Over Till It's Over*

*attributed to both Sir Winston Churchill and Yogi Berra 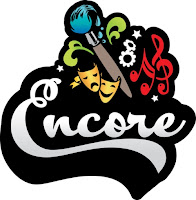 Whoever said that, he was proven right in my life today.

I'm just back from my fifth foray into the weekend that is the Annual Lacombe Art Show and Sale.  Once again I shared a booth with my lovely and talented photographer daughter, Gina Blank.

The show opened yesterday afternoon at 1 p.m. and ran through to 8 p.m. with a funky Gala evening.  I sold 1 quilted card that afternoon; Gina sold a couple of photo cards and a photo-on-stretched canvas -- her coffee cups in black and white, which is a perennial favourite.  Neither of us sold a thing during the gala; one of the organizers admitted that the turn-out for that part of the show was rather disappointing.

Today was a new day; doors opened at 11 a.m.  The weather was sunny and pleasant (not too cool; not too hot; no rain or snow!)...and so people came out to the show -- parents and kids, including many high-schoolers eager to see their work and that of their friends hanging in the annual special Student Exhibit.

A lot of looking, a lot of interest, but all in all a bit quiet as to sales.

That said, by mid-afternoon, when the refreshments -- assorted "appies", wine and micro-brew beers -- were on offer, the atmosphere was light and I'd sold 3 minis and 2 more post-cards.

My sweet parish priest came by to support and admire, as did my buddy Anna from The Shop -- we overlap part-time work on Thursdays -- and Gwendy, one of our regular Knit Night customers.

A bonus and a sweet surprise: Anna is friends with a woman who's an artist in a painters' guild -- the Parlby Brushketeers -- and Anna had told her about my Mark on the Body project.  Late in the afternoon, there I was, putting in today's stitches on MOB I.  Anna brought her friend over...and now I have another encourager as I go forward with that work...for which I am tremendously grateful.

One of my purchasers today was a gal whose sister takes Tai Chi at our church with the wife of one of the musicians in the trio of which I'm a part, that plays for services once or twice a month.  The "wife" mentioned to the Tai Chi "sister" that I had a booth in the show; the "sister" thought that the "purchaser" would like my work...and in the end both bought minis!

Gina and I both made our expenses and a bit more -- given we were sharing the booth.  But...that was it.

5 p.m.  "Good afternoon everyone!  Thank you for coming to the 17th Annual Lacombe Art Show and Sale. The show is now over..."

At least, not for the gal who was furiously trying to take in our booth's wares even as we were preparing to pack up.

I went over to her...she asked me about the work and the fabric in each of two pieces.  She hemmed and hawed. Could she still buy?  I said "yes".  Would I take a cheque?  "Yes."  (There was an ATM in the lobby but the show's credit card service had been wound up.)

The largest piece I've sold to date...completely by surprise!

And there was icing on this cake!

My "neighbour" for the show was Marg, a painter and art show regular (all 17 years I think), now in her mid-to-late seventies, who took up painting when she retired over twenty years ago.

She had a very busy weekend because this was very likely her last show.  Her equally aging (and going deaf) dear hubby was moving more slowly, and she lived in terror that he'd fall off a ladder trying to help her put up her booth.  Both of them were very tired after Day 1...and found Day 2 a bit daunting.

She'd visited my booth on Day 1...and intended to make it back as there were pieces in which she was very interested. 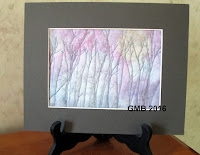 I went to say 'good-bye' and 'best wishes' to her as I finished packing...and she expressed regret.  She really wanted a piece.  She tried to remember exactly what it was.  Ah yes!  But...it was in my car.  Could I fetch it for her?  NO -- she wouldn't let me but...I had my minis...and she chose one and paid for it, cash.  I was delighted; she was delighted.  She seemed to see me as a young (!) artist with promise...and again, I told her I hoped she'd keep painting...and hoped we'd meet again.

Connections.  That's really what this art world really is about.

Decades ago, an uncle of mine had said, "It's not what you know; it's who you know."  Of course, he was referring to obtaining employment after university...

Little did he know that what I've come to understand about that time-worn, somewhat mercenary phrase is that it's true...in that what really counts in one's work, is the relationships one builds through the years, along whatever path one travels.   And one's attitude and one's spirit are what brings people together.

Artists -- whatever their medium -- connect with viewers/listeners/"experiencers" because the art they create comes from their hearts and their expression of what's in their hearts -- their attitudes, perspectives, experiences and spirits.

One never really knows how successful one's "show" has been...because it's never over till it's over.

(Linking up to Nina Marie's Off the Wall Friday...and wishing you wonderful connections...till we meet again...")

"If you don't have a good time, at least get a good story." One of my favourites. It sounds like you might have had both, this weekend.

I knew Shelley would be interested. I'm so glad I could do something. It was such a spur of the moment thing and it wouldn't have happened if I hadn't at the last minute decided to come back instead of going home and seen you working on your piece. So happy you sold work!

I am so happy to read this! It sounds like you are gradually cultivating an appreciation for your work, Margaret! More and more people will think about what they saw this year and be back to buy next year. Yay, Margaret!

I'm so glad it went well for you.

I hope to see your finished work Margaret. I love the idea and think it is a powerful way to teach others. I was so glad to meet you.

awe, you had a really great weekend. Might not be over!!! :)