I first met Jeanne Hewell-Chambers over the Internet -- on Facebook, I think.  For those of you who don't know her there, she has a relative (sister-in-law?) named Nancy who is someone who, despite her serious physiological challenges, draws interesting shapes -- and Jeanne emulates those shapes in stitch.

That's how we met.  I sent her some supplies to help her with a project on which she and Nancy were working.  I think that project is ongoing.  However, Jeanne is currently working on another project -- a very collaborative one -- to honour and remember the thousands of physically and mentally disabled people killed by the Nazis -- before what we now call The Holocaust had even begun.


Now, this hits me on several levels.

First, my mother was widowed 7 months before I was born.  When I was almost 5, she remarried.  My step-father, divorced, had 2 children -- the youngest was my Sweet Sis; the eldest was my brother, Phillip, who was disabled with muscular dystrophy, and who died at age 33 (young, yes, but far older than expected) in 1981.

Second, my late husband was -- and his family is -- Jewish. And Howard was diagnosed with Type 1 Diabetes at age 7 (some time in 1959-1960).  Now...insulin was discovered by Banting and Best  and colleagues in the 1920s...but having to take a daily (or more frequent) dose would have rendered him "imperfect" -- along with my step-brother --  in the eyes of the Nazis.

Third, both my father and my step-father fought in WWII -- in the Black Watch.

Fourth, my sweet daughter, Gina, has spent more than a decade as a teacher, advocate, and encourager of those who would have been killed by the Nazis...and is currently involved in educating and coaching those who work children with serious disabilities, and their families, through the GRIT Program...all of whom might have been tortured and/or killed a generation ago, simply for caring...

So...it should come as no surprise that Jeanne's 70,273 Project speaks deeply to my heart.  I decided I needed to contribute...so take a moment here to show you the three blocks (one in each size) I'll be sending to Jeanne tomorrow (via Canada Post).

I am doing this -- I confess -- with mixed motives.  You have witnessed the first motive -- how I am inspired to contribute...but

The second motive?  I alluded to it briefly above when I mentioned Howard's Type 1 Diabetes.  It's a terminal illness for which there is no cure.  Because the person with T1D has imperfect metabolism, over time their blood vessels become clogged, cutting off nutrients to the nervous system. In turn, this causes decrease circulation to the extremities and anywhere there are teeny-tiny blood vessels (eyes, feet, hands...).

So in a round-about way, by contributing to Jeanne's "70273 Project" I am not only honouring the heritage of my late DH...but also introducing others to the Mark on the Body made by Type 1 Diabetes...which, in Nazi Germany, notwithstanding his Jewish heritage, would have led him to the same fate...by virtue of his imperfection.

The contributions are very simple: blocks that contain red "X" marks...used to identify the "imperfect" in the eyes of the Nazis.  There are 3 sizes of blocks; I've chosen to make one in each size: 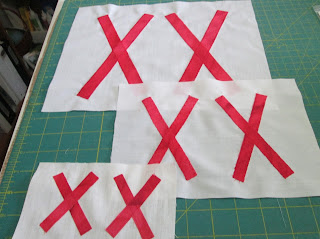 You don't even have to be able to sew to create a block.  Just check out the web information, and go from there...

To participate in Mark on the Body II or III, click HERE and/or HERE.

Either way, please keep us all in your prayers.

Your blocks are striking in their simplicity. The X's make me think of how names might be struck off a list because of their race/religion.....etc. Powerful imagery.