The Year of Early 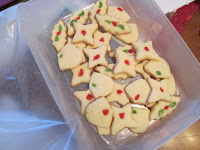 And now, Christmas preparations all around me, all beginning far too early. Canned Christmas music on my doctor's office 'hold-the-phone' line.  Deflated Santas --  the kind that require a motor to pump up and $$$ to keep the motor going -- and a mediocre arrangement of shabby reindeer on a lawn around the corner.  Even Christmas trees in the occasional living room (spied in online photos).

Then...this weekend? Even before Grey Cup?  The Annual Christmas Market down at the Community Hall on Saturday, followed by the Annual Open House and Tea at the Mirror & District Museum that afternoon.

So, this morning found me baking shortbread cookies that insisted on being particularly difficult this year. (The photo above is from last year.)

I've divided the batch between the Museum and St. Cyprian's Anglican Church -- as my contribution to the annual cookies-for-shut-ins that the Anglican Church Women in the parish will be taking out on Monday afternoon.

Usually I make another batch for neighbours etc. but not this year.  I'm done in.  I have a bit of real butter left over that will be saved for the Christmas mashed potatoes or something.  It will freeze, too.  But no more shortbread cookies.  My kids don't like them and my waistline doesn't need them.

Oh, I'll still make a batch of fudge to share with family and friends, but that will be next month, when Christmas is right around the corner.  And if I get a hankering for it, I'll do a cranberry casserole bread, which never tastes right except on Christmas, when I enjoy it for breakfast with coffee, orange juice and later, another slice with some egg nog for lunch.

And next year?  No shortbread.  Maybe nothing else either -- at least, not before December 1.

Aren't those deflated Christmas decorations depressing. Shortbread makes me totally forget them. I like it anytime of the year but winter is the best! :)

I'm with you, Margaret. It's all too early. When I was a kid, we didn't put our Christmas tree up until Christmas Eve.....after we'd been to church for the candle light service where we heard about Jesus' birth and sang Christmas carols.

Shortbread does have a mind of it's own, it's also bad for my waistline, as well. I agree, it's harder and harder to get excited for Christmas until it's almost here. I think we've spread the season out too long and watered the whole thing down. I don't get in the spirit until about Dec 15.