I'm at the start of what I hope will be another quiet week.  I've been nursing a cold since November 6...and am still in the can't-taste-or-smell-anything stage.  Except for the days in The Shop, I've tried to lie low as much as possible.

Most of last weekend was taken up with binding the medallion quilt.  Once that was finished, i turned to knitting -- and that, mainly for Christmas...like


And this one using the same pattern but a completely different yarn:


And these mittens, done as a commission:


Then the last of three pair of slippers for my DD's "Air B&B" guests, also in 'Merino Stretch' yarn: 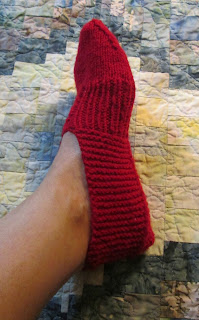 This past Friday (the 13th) I finally drummed up enough energy to get back into the studio, and by yesterday evening had finished a mini on commission: 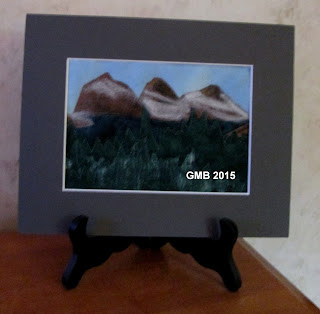 Based on a photo of a popular trio of peaks in the Canadian Rockies, it's a Christmas gift from my client to a friend, so I'll say no more...though yes, the 'snow' is needle-felted white wool roving...

And I began to agonize over my assignment for EB's Master Class.  Here's EB's feedback about my sketches:


The first two are okay but seem a little literal and the perspectives are puzzling rather than mysterious.  Mysterious is good! Puzzling or confusing is not!
When I try the crop tools on them, they're kind of empty in the middle too.
But...let's go down to the third one... 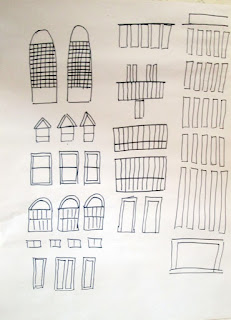 Now you've not indicated how these would actually be placed in a quilt, but i do really like the little units you've extracted, I suggest putting these - some of them probably not all of them 0- into a specific structure i.e. not just floating around in space as they are at present.  you could arrange them in horizontal rows, vertical rows, squares overlapping, different grids, radiating out etc etc...  Be thinking focal point - keeping your greatest area of interest just off center, less interesting and more space towards the edges. I think you've found very interesting details in the photo...now to organize them!

Though this was my favourite of the 3 sketches , I hardly knew what to do next.  I tried rearranging sets of windows in some sort of sampler, and it just came off looking rigid and stilted.

Then there were the bombings in Beirut and Paris...and I was distracted...but only long enough to be inspired.

I decided to focus on one window shape: the one in the top left corner.

I found some charm squares - 5" unfinished - in a variety of what resembled hand-dyes, mainly dark and sombre blues, greens and maroons, all with a good deal of grey in them.  And some, not so dark, but softer, lighter.

I found some narrow strips of black fabric from a long-abandoned project.

So...I got this idea about a stained glass window, with a curved 'stone' top and stone base (I have a good deal of wonderful fabric for this), reversible -- the dark fabrics on one side and the lighter on the other -- and in between, gold, peeking out through a crack that will be sliced through the panes...the Light getting in, no matter how hard the darkness tries to stamp it out.


So far, I've only blocked out the two panels.

Where you see white spaces, there will be more black sashing; it's just that I didn't want to cut and place till after I hear from EB...

Having posted it off, I turned once again to knitting...and pondering...


I leave you with the words of Leonard Cohen, from his song/poem, Anthem...


Ring the bells that still can ring.
Forget your perfect offering.
There is a crack in everything;
that's how the light gets in.

Email ThisBlogThis!Share to TwitterShare to FacebookShare to Pinterest
Labels: 3 Sisters, Christmas gifts, commissions, EBMC, Leonard Cohen, The Light Gets In

Yes, let the light in! Luv the process of your work!

Hi Margaret,
Hope you are feeling better. Love the block idea for the windows. Really interesting to consider this emerged from the photo that it did. Great lesson in letting go of portraying an entire scene in a photo.
Amazing that you are nearing the end of your year with Elizabeth. Congratulations on that!
Judy

I'm enjoying the progression of the windows. It's interesting to hear EB's comments and to read your process. Love your knitting.

Feel better, Margaret! You are certainly getting a lot done while sick... The Leonard Cohen quote is one of my faves.

I'd be tempted to keep those red slippers for myself if I didn't already have my own pair; they look great! ...That being said, if that cowl pattern ever calls out to you in reds or browns... or even a deep, deep wine pink... ;)