EBMC for June (and Assorted Other Stuff)

I think I'm finally getting caught up from all those days away from home in May and June...but it's been so lovely outside that I've not wanted to be anywhere else, let alone at my computer. Today, though, despite the heat there's a wonderful breeze, so I've taken the laptop with me to a table under the trees in my back yard...ah, bliss!

Breezy days in the Outdoor Studio have enabled me to forge ahead on the hand-quilting I've been doing: a throw that was meant for my neighbours, J&E, last Christmas!  It's all finished except for the wide outer-most borders, which I'm doing in a 2"-square cross-hatch design.  All was rolling along smoothly till I discovered that while 3 corners looked like this:

Worse yet, the triangles on that narrow border were based on that bottom cross-wise line, instead of up at the top as on the other corners...and the cross-hatch lines are based on the spots where the triangles meet the wide blue border...

Ah, well.  A bit of frogging never hurt anyone, and I was able to redo the triangles and the cross-hatching without too much fuss and bother.  There is still a tiny "design element" in the narrow border on that side that had to be inserted to get the matching to come out right...but it's far prettier than that oopsy corner!

When the breeze died down and the sun got too hot, I went indoors to work on my "Layers" piece for this month.  I took EB's advice and stuck with the multiple trees, but discarded any plans to paint fabric or otherwise try to augment them in my first attempt.

That's right: I started over.  Here's the piece with the trees layered and fused on the background: 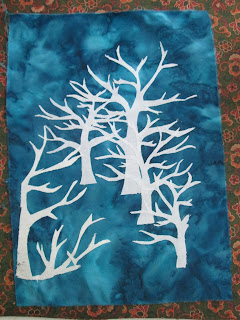 I know; they look a bit funky.  I had it in mind to crop the piece so I played with cropping the trees, literally.  Then I stitched them down with white thread before I sandwiched and quilted it.

I wanted a very thin sandwich, so I used some wool felt (really suiting, I think; it was a donated scrap) as the middle layer.  I went with a variegated thread that was the best I could do from my stash to get as close to the background as possible.  There's a bit of light green in it which adds an interesting woodsy feel to the piece without being distracting.  First I machine quilted the upper part of the piece and around the outside of the tree branches; then I hand-quilted the centre foreground, which reminded me of a pathway into the woods.  Here's the finished piece, lying on a piece of white mat board: 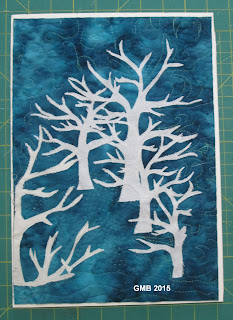 Wait?  Finished?  Yes...in a manner of speaking.  I decided not to finish/bind the edges because...I found a great mat for it!

I'm very pleased with the results and have sent the photos off to Elizabeth for her critique.  Meanwhile, I'm linking this up with Nina Marie's Off the Wall Friday...and going to settle down with my book...Peter Robinson's latest, Abbatoir Blues.  Inspector Banks and his team are closing in on the murderer...

I love this version!

Ta Dah for sure! It sure looks wonderful. I wonder if the critique will concur!

Margaret, I think this piece is very successful. Bravo!

I like what the cropping has done to this piece and the matting has added to the images that move into the piece from the edges. Very successful and you can always use the original background in another piece.

Your trees turned out really nice :-). This background fabric fits better than your original choice.