And Sew It Goes

It's a challenge to post even weekly these days, as I am in the thick of Christmas prep.  I have lots to share.

First up, speaking of sharing... My husband's cousin Larry and his family own a wholesale drapery and upholstery business, supplying fabrics for interior design.  When I was in Vancouver in October for the needle-felting workshop, I stayed with Larry and his wife, Miri, at their lovely home, and we got to talking about my work.  Larry offered to send me a box of remnants from their Vancouver warehouse.  Last week they arrived.  What treasures!  I've only had a quick look through them, but they are mainly drapery materials in a variety of prints and patterns.  I'm thinking of passing along Larry's generosity when I have my Blog Anniversary in February...so stay tuned!

I didn't have time to dwell on the fabric treats, though; I had to get back to the sewdio!

I'm making headway on Bonnie Hunter's current mystery, Grand Illusion, and will finish the last stack of Clue #2 units today.
THESE (below) 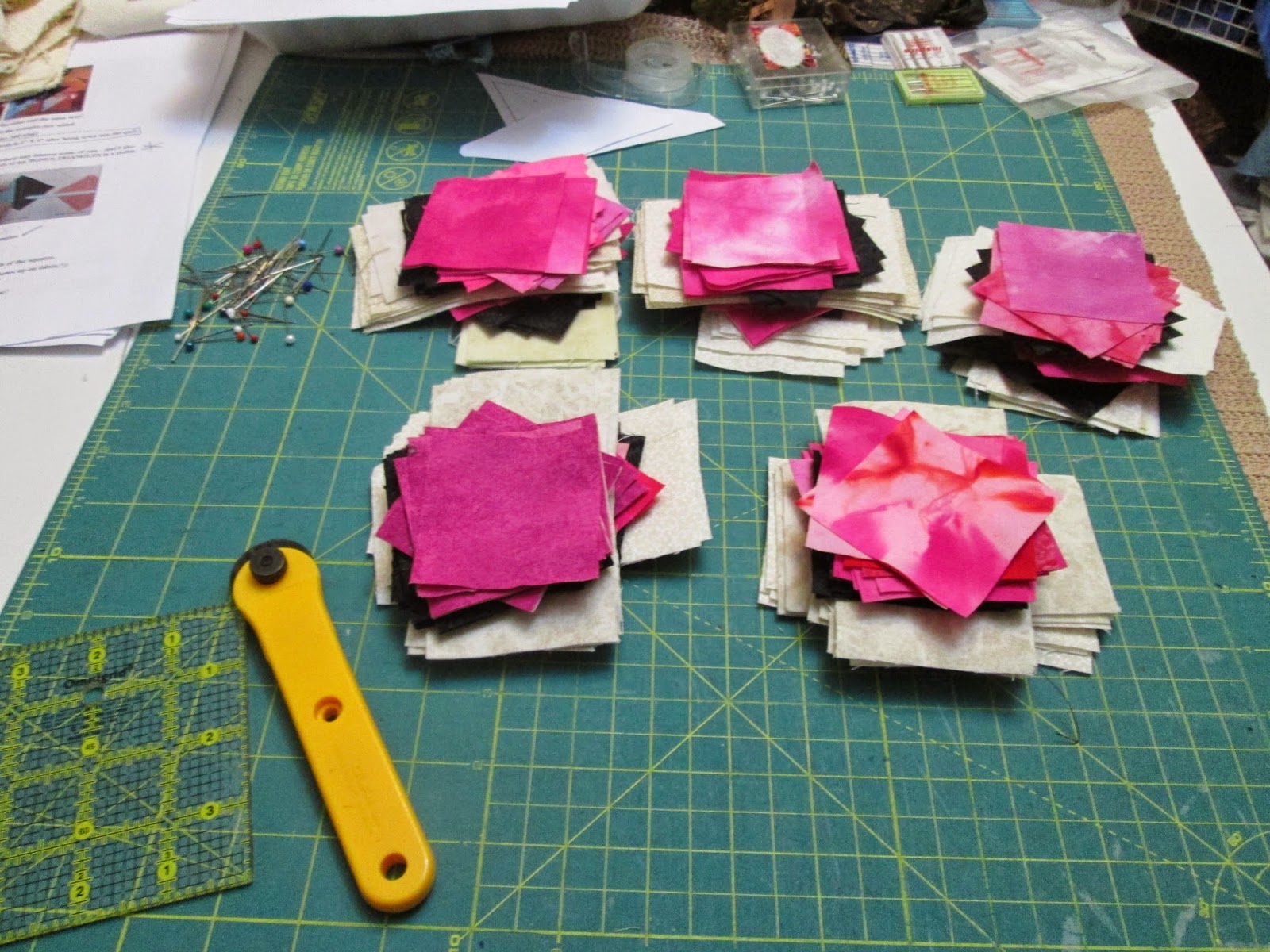 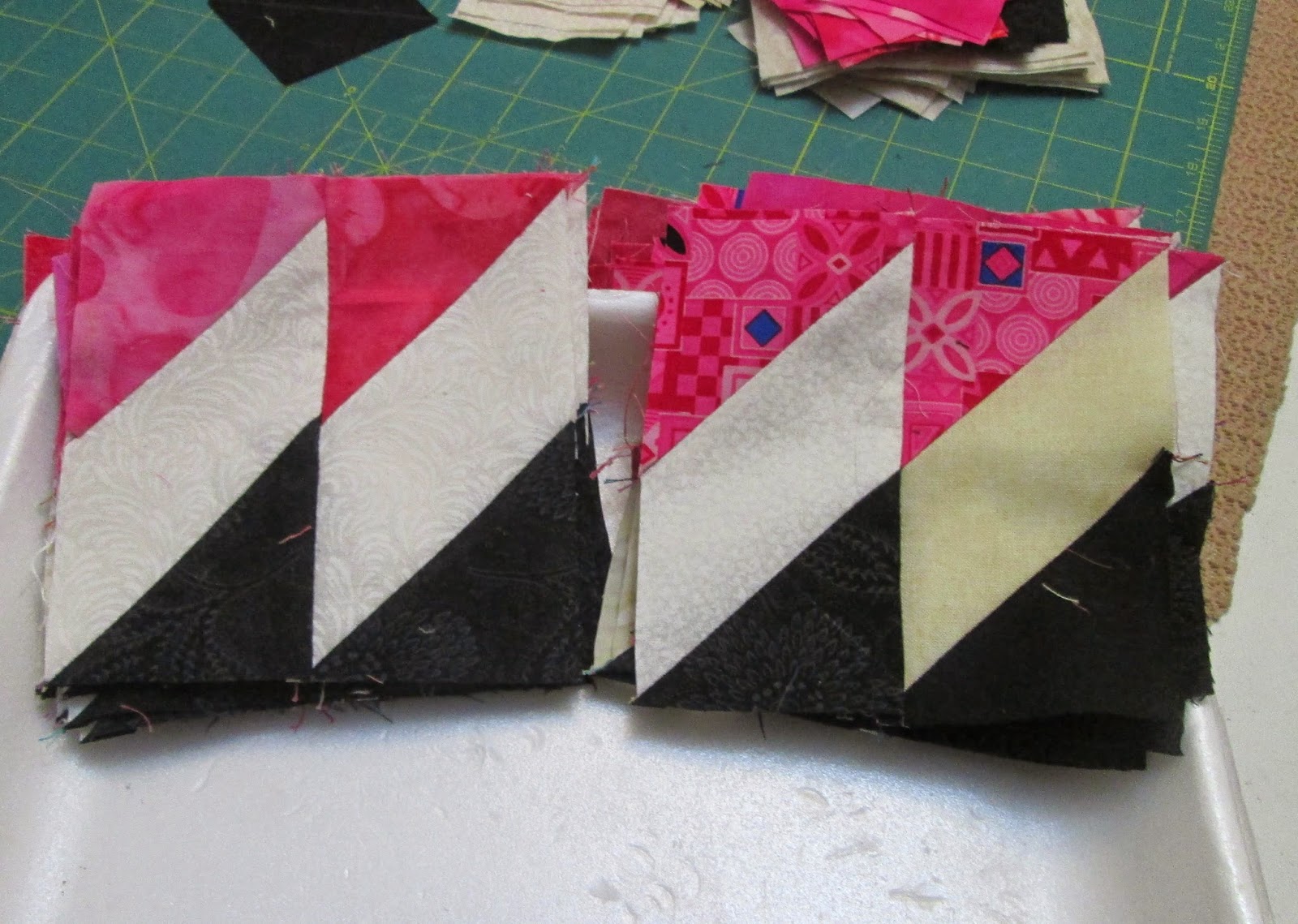 That tub (above photo) is now almost full, with the goal being five stacks of ten pair of rectangles, each pair making a 4 1/2"-square unit.  Only 5 units left to piece and I can move on to Clue #3.

In other quilting...some years ago I made a top from a Thimbleberries block of the month project designed to create two throw quilts -- "Sunrise" (6 months of blocks) and "Sunset" (another 6 months of blocks).  "Some" years ago?  I just checked the pattern and the set was published in 2005!

Anyway, I put the "Sunrise" top together at a quilt retreat in December 2008...and did nothing with it.  A few years later I sandwiched it, the idea being I would try to quilt it by hand.  I tried doing so in a small frame I had at the time -- didn't like it.  Sold the frame.  Tried a hoop.  Didn't like it.

You see, I'm a long-time embroiderer, and find the rocking motion of hand quilting very difficult.  I also don't like to wear thimbles.  I put up with gloves when I am free-motion quilting but get them off as quickly as I can.  I seem to need to feel the fabric, and to control the piece on which I'm working by having it close to me.

This year, because my neighbours J & E are so kind to me, I dug out the top and decided to machine quilt it for them for Christmas (it was already heavily pin-basted from my earlier attempts).  I procrastinated, finding even it's relatively small size hard to manipulate (62" x 76" is BIG for me!)

This past week, inspired once again by the hand-quilting practice of Joe Cunningham, I decided to try again to hand quilt it.  I am doing it in my lap, no hoop, no frame.  I've managed to develop a quasi-rocking movement and can put up to 5 small (but not infinitesimally tiny) stitches on the needle at a time.  I have either Craft in America or my Craftsy class with Joe or classical music on in the background, and away I go.  I likely won't be finished it for Christmas but there will be enough of it done to show them, and as E doesn't do this sort of handwork (I don't think she does any handwork to speak of), I'm not worried about criticism!  ;-) 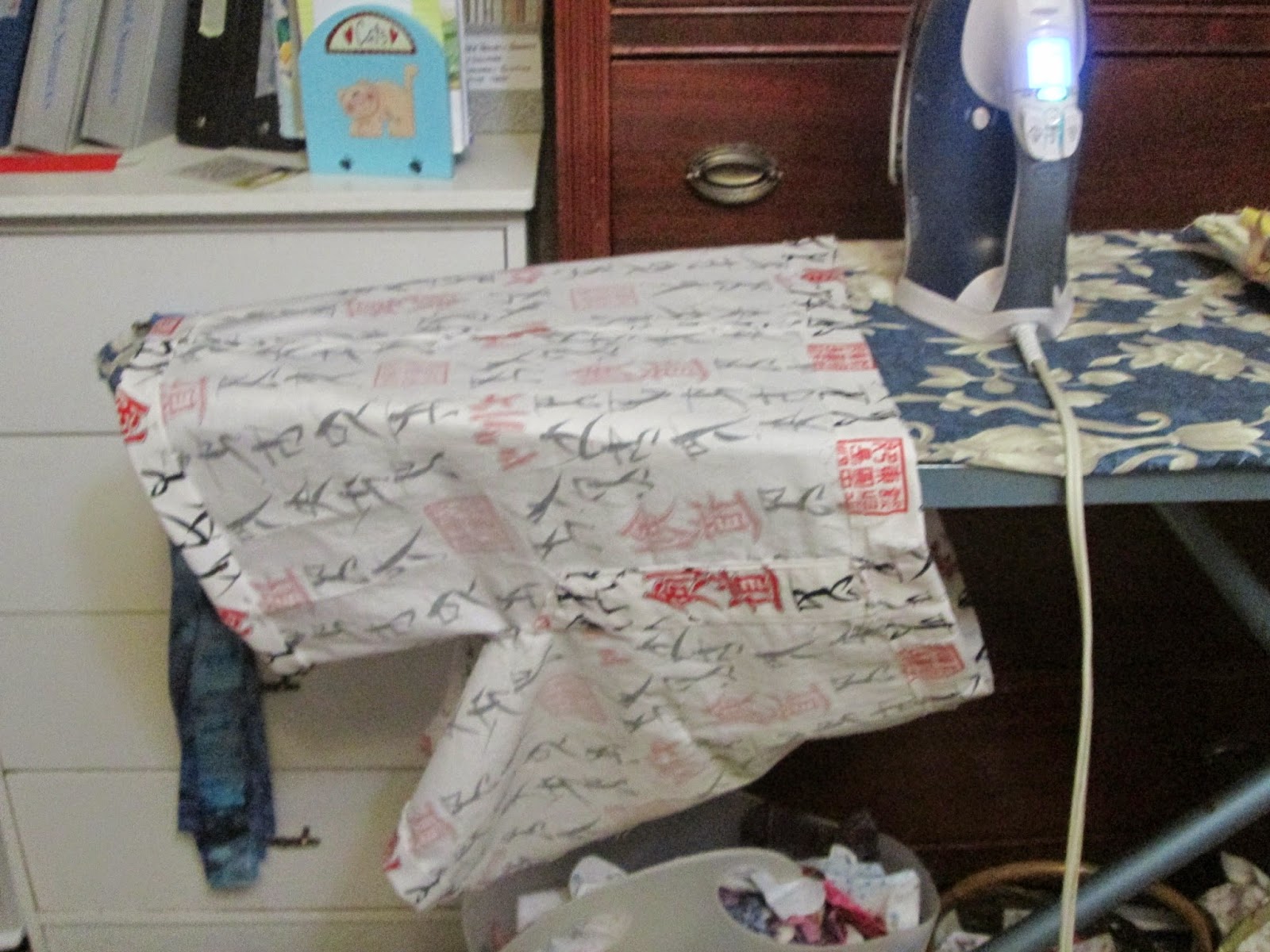 And the knitting, too...the latest being a slouchy hat and button-up "scarflet" for my sister, in the mail today:


Still a pair of socks on the needles, and a cowl...and another scarf to sew up ends etc....so what am I doing still sitting at the computer?

Time to link up to Nina-Marie's Off the Wall Friday (okay; so I'm a bit late!) and the Monday Linky Party for Part 3 of the Grand Illusion Mystery...and get back into that sewdio!

Have a great week, everyone -- and a special Happy Hanukkah to my Jewish readers...their Festival of Lights begins tomorrow evening.  Blessings, all!

I am so impressed by all your accomplishments. Can imagine that you're happy with a box full of such nice designed fabric.

You have been very busy! Hope you are having a good time with the mystery!

Wow, you are really busy. I am impressed by your determination to find a method of hand quilting that is enjoyable for you.

Good stuff and Santa's elves are probably too busy to help ya! lol The blessings of the season to you, Margaret

You are amazing!~ I looked at Bonnie's mystery and when I saw the number of pieces to be cut I said "no way". Thank you for the Hannukah wishes.

Love to see your mystery quilt grow. So glad that you have the patience to make all those parts! Thanks for taking the time to share. I know how busy you are this time of year.