Some of you, Gentle Readers, may have picked up on the "blues and blahs" through which I've been wading for some time now.  They've been coming and going lately; some days I awaken energized and excited about the day, while on others...well, let's just say I'd rather not get out of bed.  I've been trying to counter-act the B&Bs with textile therapy, whether quilting, knitting or embroidery.

One of the exercises I did this past week was to make a new quilt using a technique I've been meaning to explore for almost 15 years now.  I bought Ricky Tims' book, Convergence Quilts sometime in 2000 (I think); I can't remember exactly when.  I also bought a piece of his hand-dyed fabric -- but that's not what I've used for this piece.

No.  A few weeks ago my friend C gave me two pieces of 'funky' fabric that she'd bought for a project -- fabric that just didn't suit the project in the end.

I tripped over it earlier this week, looking for something fresh to start, and it dawned on me that Ricky Tims' convergence technique might just make something presentable.  First, though, I wondered who would create such odd fabric and why.

The information on the selvedge revealed that the fabric line was "Indiana Harvest" by Phil Beaver for Free Spirit Fabrics.  A little internet research brought up a pdf file on how to use this fabric which, it appears, had been created by Mr. Beaver specifically for the purpose of creating applique still life and landscape pieces.  I'm not sure if Mr. Beaver is still with us, but he is (was?) an award-winning quilter and designer, has taught workshops at Road to California and other venues and appeared on "Simply Quilts" in its day.  If you see his work, you will see why he created this fabric line and how it was used.

And so... to work on convergence!  Having never done this technique I decided to begin with a "level one" convergence quilt.  According to the directions, I cut squares out of the fabric. laid them out on my cutting table in a "square of squares", marked the top of the top 2 squares with an 'orientation line' (so I'd know which end was up!) and seamed them together at the bottom.  They were then ready for graduated slicing:

The next step involved moving them around, which I did on my design wall:

Long story short, the technique involves sewing the re-arranged strips together, rotating the piece, doing some more slicing, arranging and stitching, to come up with something like this:


I really liked this -- and could see it simply faced, or mounted on stretcher bars/canvas (if you could find them to fit), but Tims suggests adding two borders, and as I was into doing the entire exercise, I found some fabric for the recommended very narrow (1/4" finished) border: 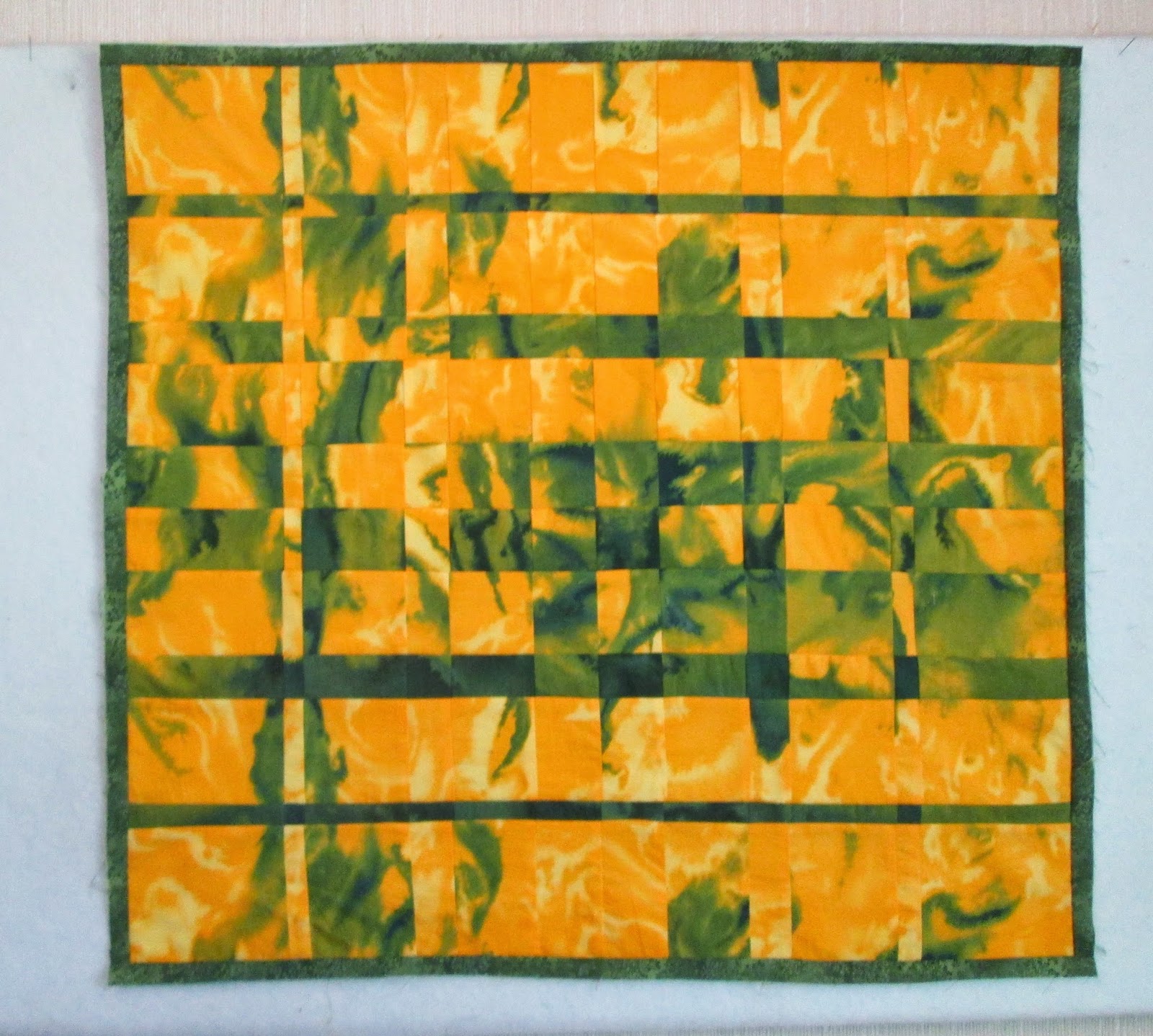 In his book and in the gallery on his website, Ricky Tims gives several examples of how to play with wider borders or otherwise to finish the piece.  I opted to try to use what I had left of this fabric to create the second -- wider border.  In the end, I had 3 borders that will finish at 4", and one that will be narrower, turning the piece into more of a rectangle -- but I'm still pleased with the finished flimsy:


As you can see from the caption, I've already given the piece a title -- Canola Convergence, because it reminds me of the fields of canola around here in mid-summer.  I've pieced together a back and have sandwiched it for quilting, which means I'll be binding it rather than facing it.  I have more of the fabric I used for the narrow green inner border, and plan to use that.

The second piece C gave me is in the same fabric line, but gold and brown, and I plan to do the same exercise.  Working title? "Desert Storm".  ;-)  Stay tuned...and be warned.  If you decide to try this technique, it could become addictive.  I'm already pondering other wild fabric in my stash, with "what ifs" rolling through my mind.

Though it's late in the day, I'm going to see if I can still link this up with Nina Marie's "Off the Wall Friday"...and see what else is happening over there.
Posted by Margaret at 2:00 pm

I am so glad you did this quilt it is truly amazing and the title is fitting and it certainly reminds me of paddocks of cranola. Cheers

Fabulous use of fabric.

I love your imaginative use of Phil's fabric. I took his class at Road but most of us painted our own versions. He has/had a very distinctive style. well done!

I have always thought about doing a Convergence Quilt. Ricky showed a wide selection of them at a workshop here a few years ago. Happy you have found something you are enjoying. Canola looks great.

This is a fun technique!

Although I've heard of the technique, I'd not seen it in action. I love the effect. It took a rather interesting piece of fabric and turned it into something beautiful.