In my last post, I promised an update from "Winter School".  Recent study hasn't involved a class, though.  Rather, I've been working through books on Charles Rennie Mackintosh for the piece on roses I'm preparing (scroll down).  There are two motifs he favoured that I want to refer to for my work: the Glasgow Rose, which I already mentioned, and the idea of squares/grids/lattices.

To wit, I've been exploring ways to create grids, including surface design, and the work of Beryl Taylor -- specifically her diamond grid hanging shown in Mixed Media Explorations (QuiltingArts, LLC, 2006).  This is a step out on a limb for me, as I far and away favour working with fabric over paper and glue...but in the course of this work, I decided to go ahead and try a couple of samples.

I began by making what Ms. Taylor calls "fabric paper", with a piece of muslin, basic white glue, and assorted paper and tissues:

Once it was dry, I cut it up and made this sample:


What I did was this:  I had an 8 1/2" x 11" piece of acrylic felt which I covered with a piece of thin silk fabric from a bag of scraps recently given me by my friend C (from her friend, G in Calgary).  I then cut a piece of the fabric paper, and stitched it down over the silk piece.  I further stitched a grid of rectangles over the whole thing, and cut out every other one to make the grid...but left space at the bottom because I wanted to test out the layout and impact of a Glasgow Rose motif stencil.  I did the stencil in gold -- it turned out rather well -- and mounted the entire thing onto a larger piece of the fabric paper, stitching it down by hand all the way around on the pink silk.  (Sorry, no photo taken.  Later -- I promise!)

The upshot of all this was that while I liked the effect, I don't want to work with fabric paper in a large size.  It's messy to make, and -- more importantly -- too stiff for what I want to do.  However, it gave me a sense of what the work could look like if I combined a grid and the rose motif, and I learned something new in the process.  Oh...and I have one more grid sample to make from the left-over material (again -- photo to come; I promise!)

Meanwhile, back in the woods... I made up a large version of "A Walk in the Woods" that needs to be quilted for my 15 x 15 "Contrast" theme, and then I thought about interpreting it on blue background, like this photo: 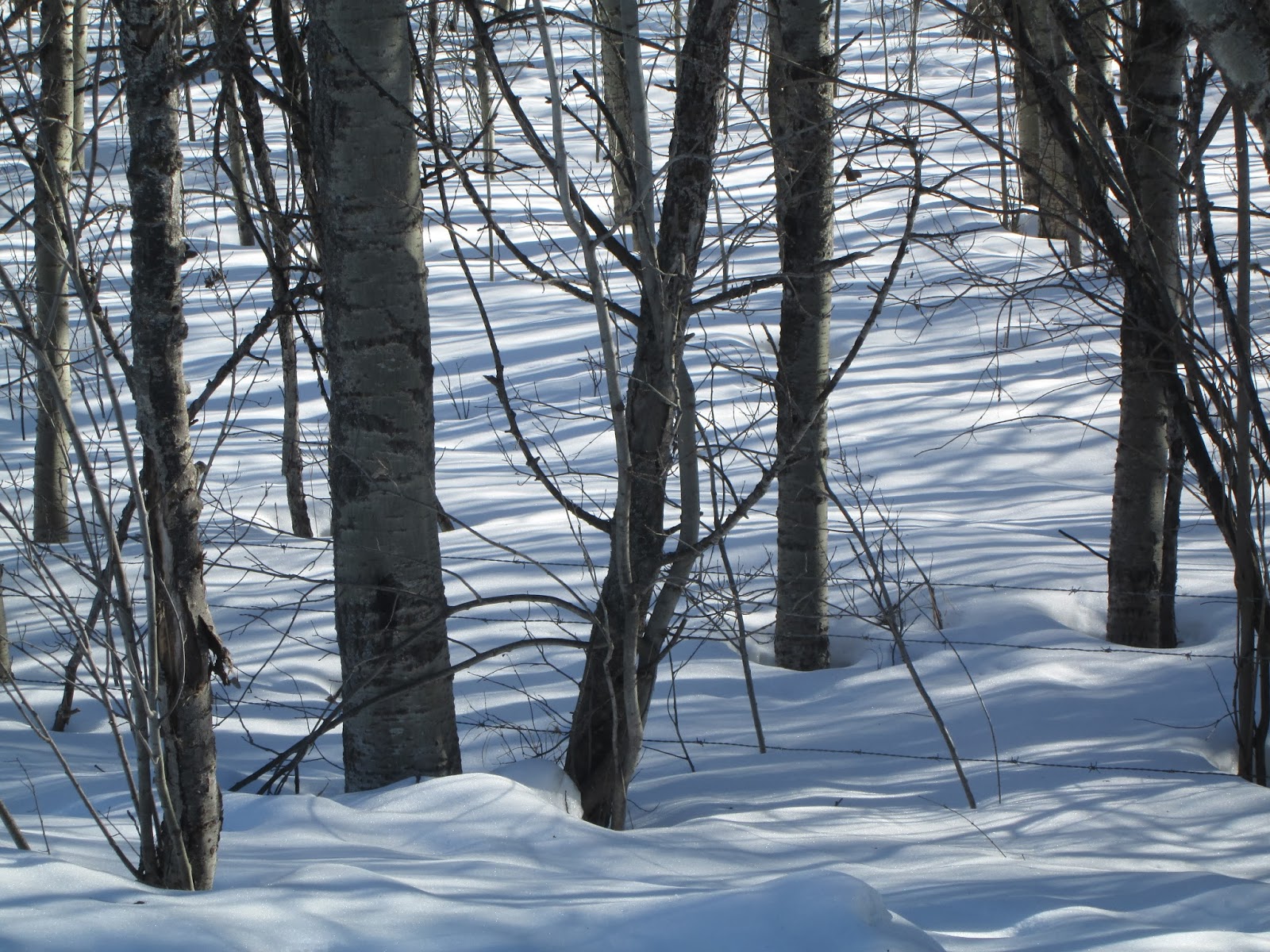 Yesterday, I dug out some of my own hand-dyed blue fabric, a closely woven cotton, that would be tough to use as sky because it had some 'spots' on it that were very uneven.  I thought about how to paint it, and decided to use freezer paper to create a mask.  Here's what it looked like partially painted: 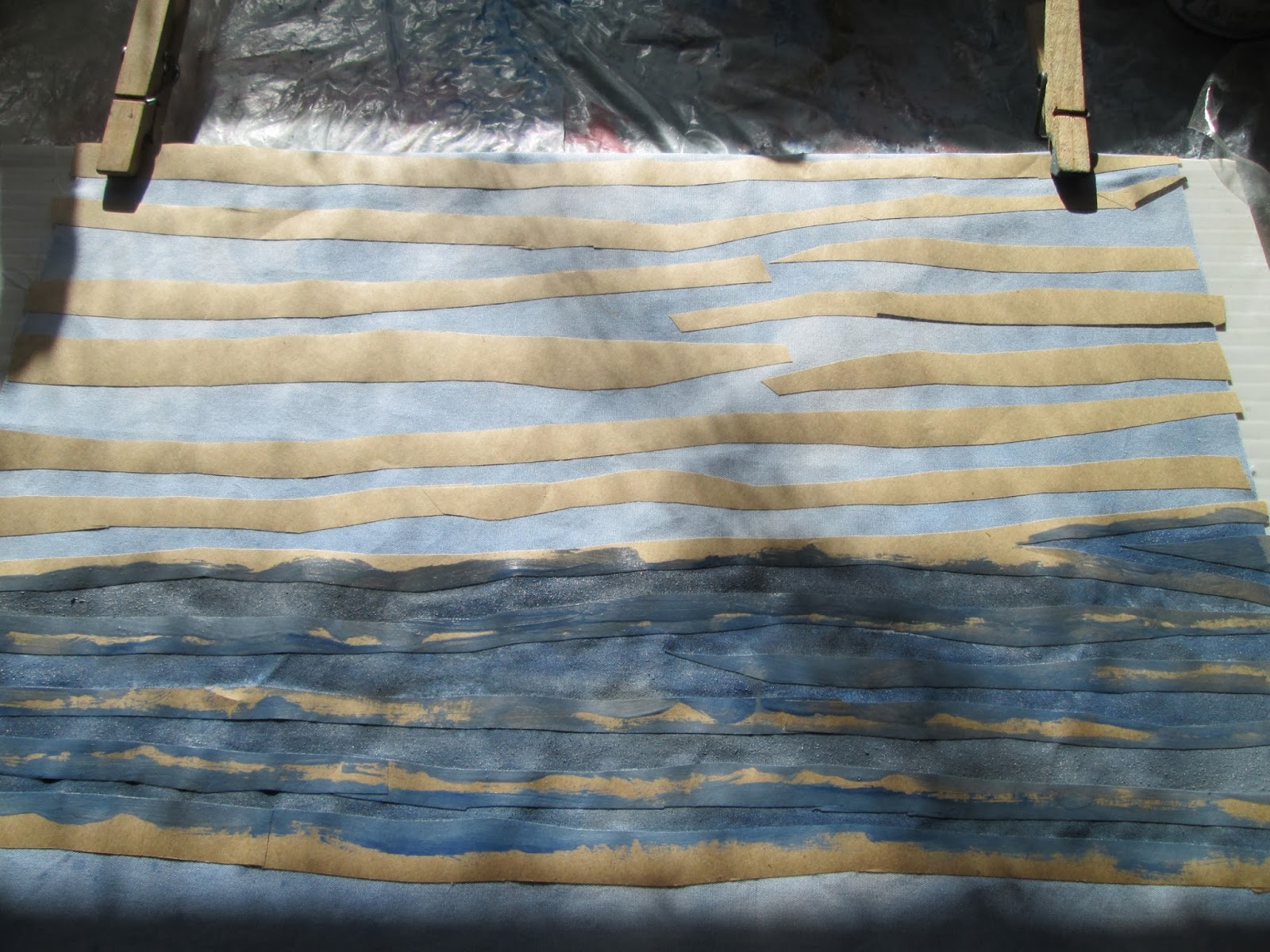 It's clipped to a piece of foam core for stability, and sitting on the counter in my south-facing sunny back room, but you get the idea.

So...as of today, two pieces are ready for quilting, and a third is on the wall in a life-sized mock-up of paper and plastic film: 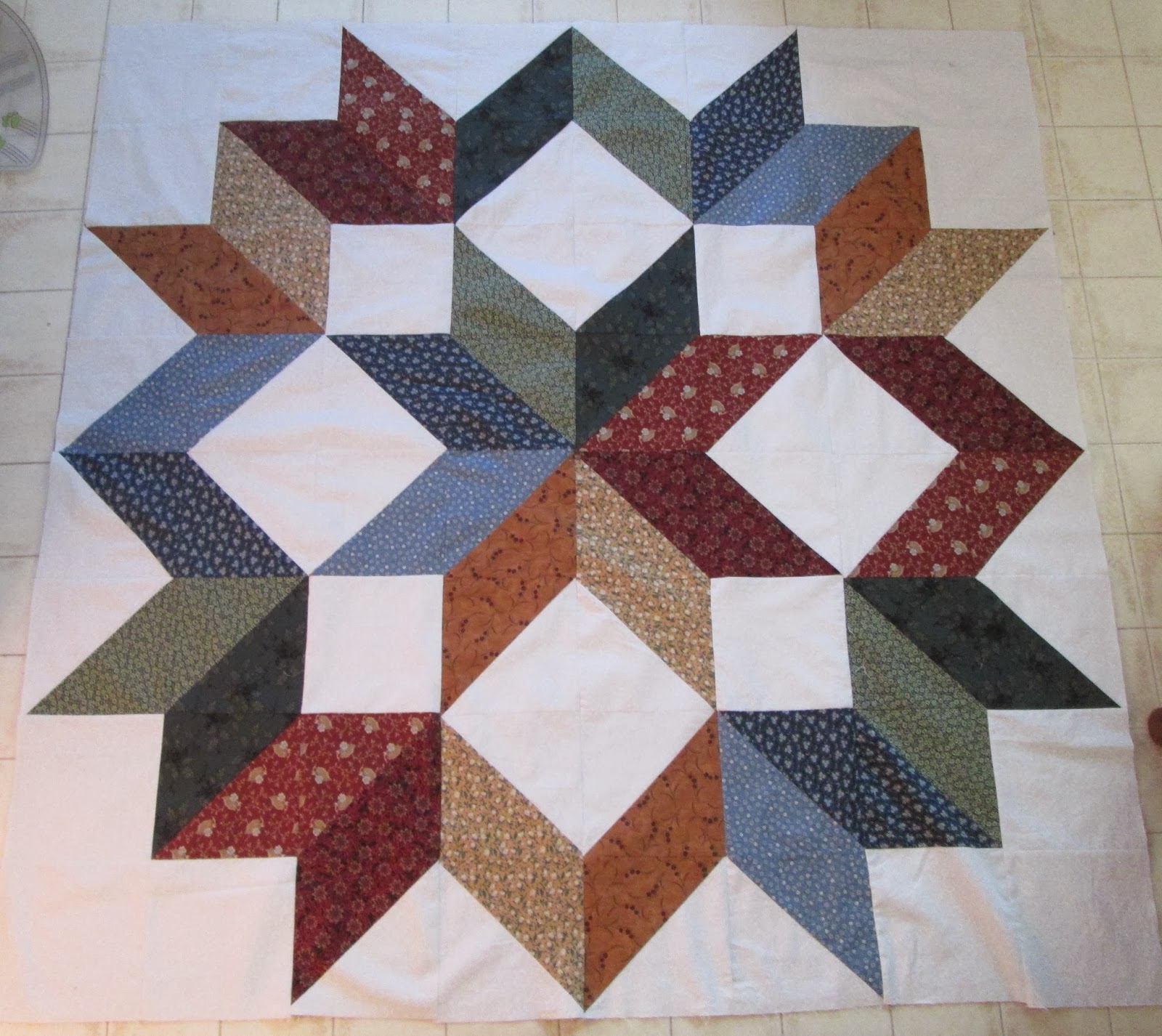 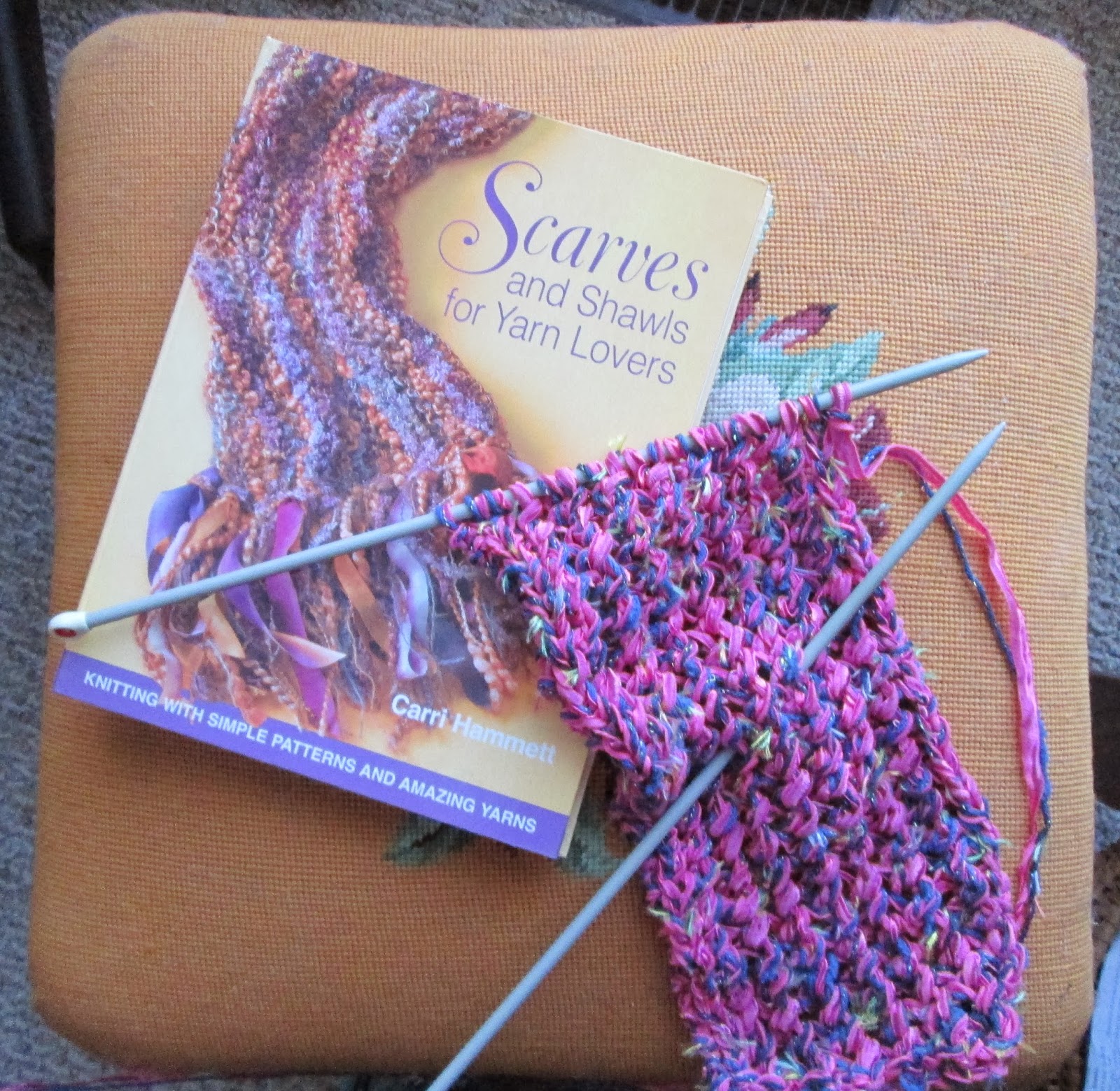 I recommend this book for those of you who aren't into designing your own knits, and/or are looking for colourful inspiration -- especially for what to do with those fun and funky yarns you might still have in your stash and which are making a bit of a come-back these days.  It's Scarves and Shawls for Yarn Lovers: Knitting with Simple Patterns and Amazing Yarns by Carri Hammett, Creative Publishing International, 2006.  Mine is the hard-cover version, which has a spiral-bound spine so it lies flat when opened -- always a plus!

Now...off to quilt!  But before I go, I'm linking up with WIP Wednesday on The Needle and Thread Network -- because clearly, this week, I've got WIPs!
Posted by Margaret at 10:37 am

Love what you are working on! The paper fabric is an interesting process. Great scarf, too!

Re Grids - have you read the Jan Beaney & Jean Littlejohn book Grids to Stitch, book #17 in their 24 book series. They have some good ideas using Romeo and other wash-out surfaces. Very slick. I think I have every book these ladies wrote!....donna

A lot of very creative work, winter is not slowing you down!

It would have been fun, following you around this week. I love Beryl's work and have only tried fabric paper in small projects. I've enjoyed working with it and really like how you've incorporated it. I'm also enjoying how your "A Walk in the Woods 11" is progressing. Great effect with the paint. I'm looking forward to seeing how these pieces of art, turn out.

I love the lines of trees and shadows : ) You are working on so much, oh my!