First, a big "thank you!" to new followers of my blog (you know who you are).  Sometimes I'm notified, and sometimes you just pop up, like crocuses in the spring.  I appreciate each and every one of you, old and new.  :-)  My next blog-aversary is coming up soon; I think I'll have a wee give-away of some lovely, gently-used publications of the magazine persuasion, so stay tuned!

Now...what have I been up to?  I have several projects going at once, with classes, samples, kits and such...

Today marks two months of work on "Mark on the Body".  You can read the update (with photos) HERE.

On the weekend, I felt like piecing, so I put together some more units in the medallion-style sample top I'm making from that kit I won as a door prize a few years back. (scroll down)  I've sewn together three rows of blocks, and have assembled blocks for the fourth row, thus: 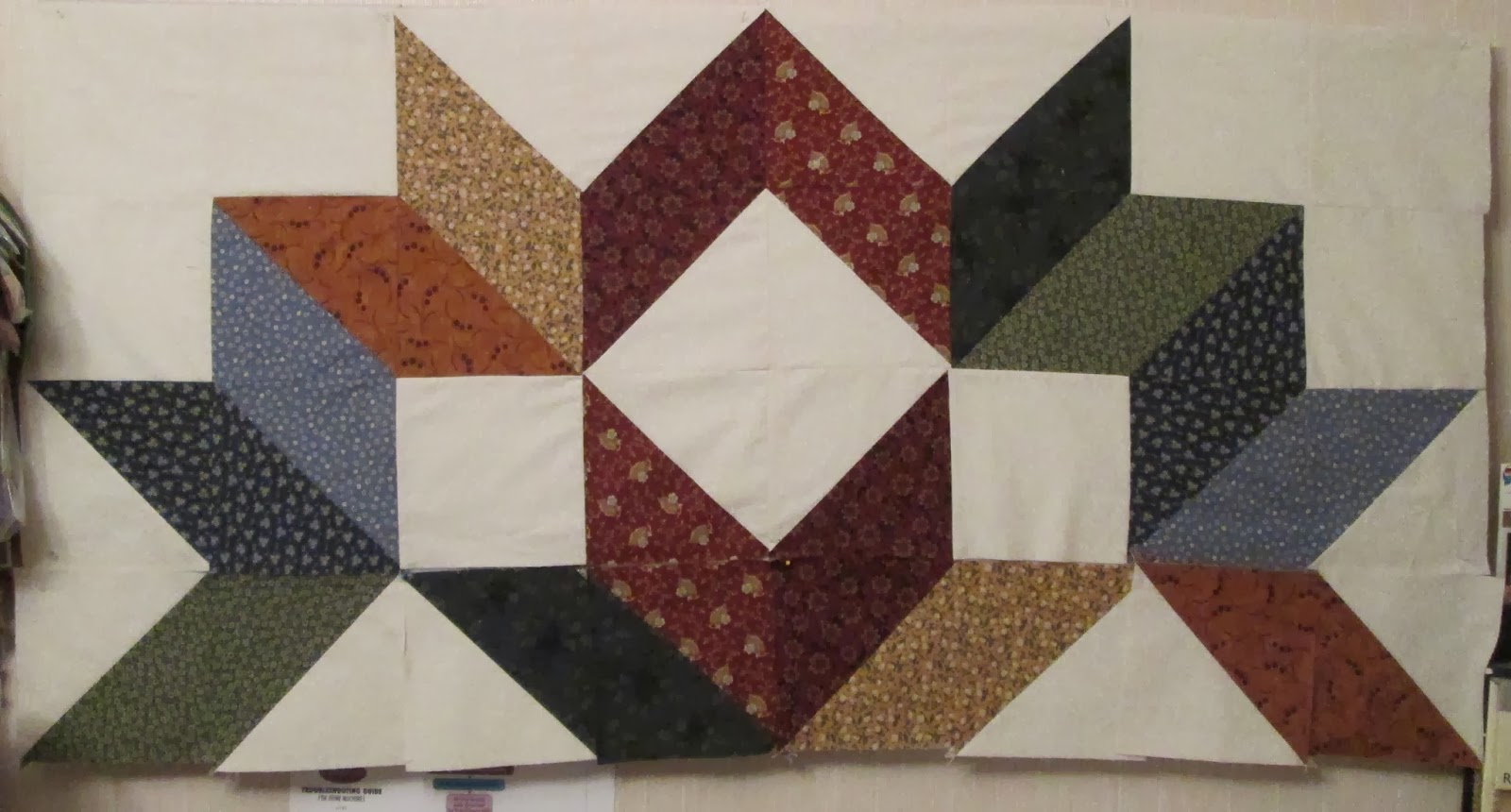 Guess what?  It's another study in CONTRAST!  There's both colour contrast and value contrast in this piece; which colours you use where are determined by your selections, as each colour is numbered (one through eight) and paired according to the layout in the instructions.  Each block is 6" finished, and each row is eight blocks across, or 48" finished.  The medallion will have another four rows -- and then several borders to flesh it out into a 70" square piece.  It's going to be quite something, eh?

Yesterday was all about hand work.  First, I finished embroidering the letters of "Attention", the first panel in "Deteriorating Civility" (scroll down).  Then I began the seed stitch to accent the lettering.  I've had to be very careful with this, as the rusted and distressed fabric is, indeed, deteriorating!


The "Attention" panel is sandwiched to the worn and painted quilt background with a thin layer of batting, and some more distressing with the needle-felting machine (embellisher), and then with a narrow band of machine stitching on each side.  The number 12 Finca perle cotton is being used for the seed stitch around the lettering, which adds dimension (a bit of a trapunto effect) and texture.

Next I worked on my knitting -- finishing the gusset of the first of my daughter's birthday socks.  Then I worked some more on B's "Little Sheep Virtues" pin cushion.  I need to get a move on both of these projects as my DD's birthday has passed, and B's is on Saturday!! 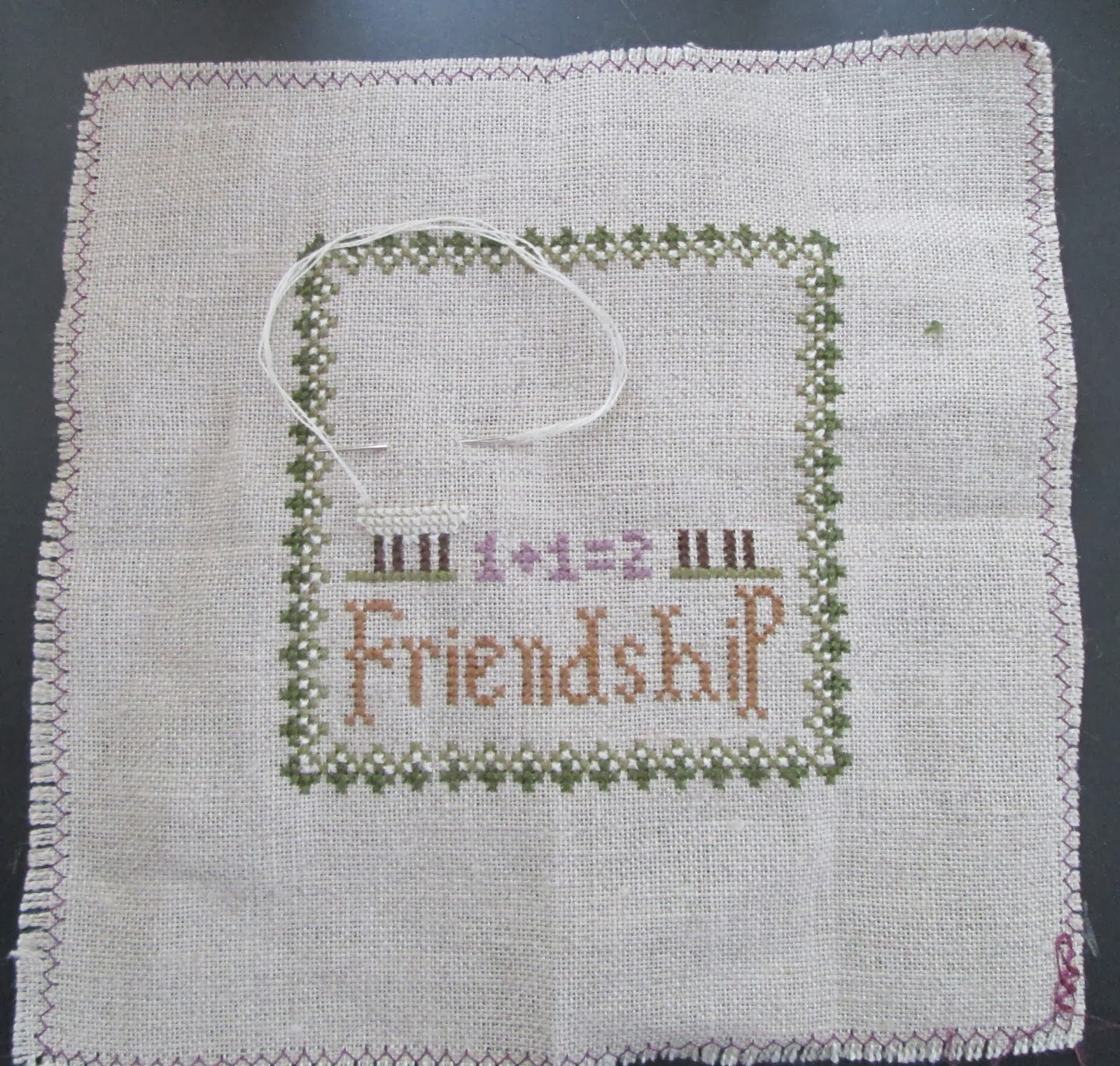 Today, I wanted to get going on one of two pieces inspired by photos taken by cyber-friends.  I've obtained their permission to reproduce them in fabric.  The first is "Beach at Noyac", based on a photo by Jane, a knitter I "met" on Ravelry or Facebook or Knitter's Review or...maybe all three!

Before making a full-sized piece (8" square, which I want to mount on stretched canvas), I decided to try it out in 'miniature' -- for a variety of reasons.  I was sure I'd found the perfect fabrics, but wondered how to replicate the pebbles, the foam of the waves, and the shiny surface of the rock. 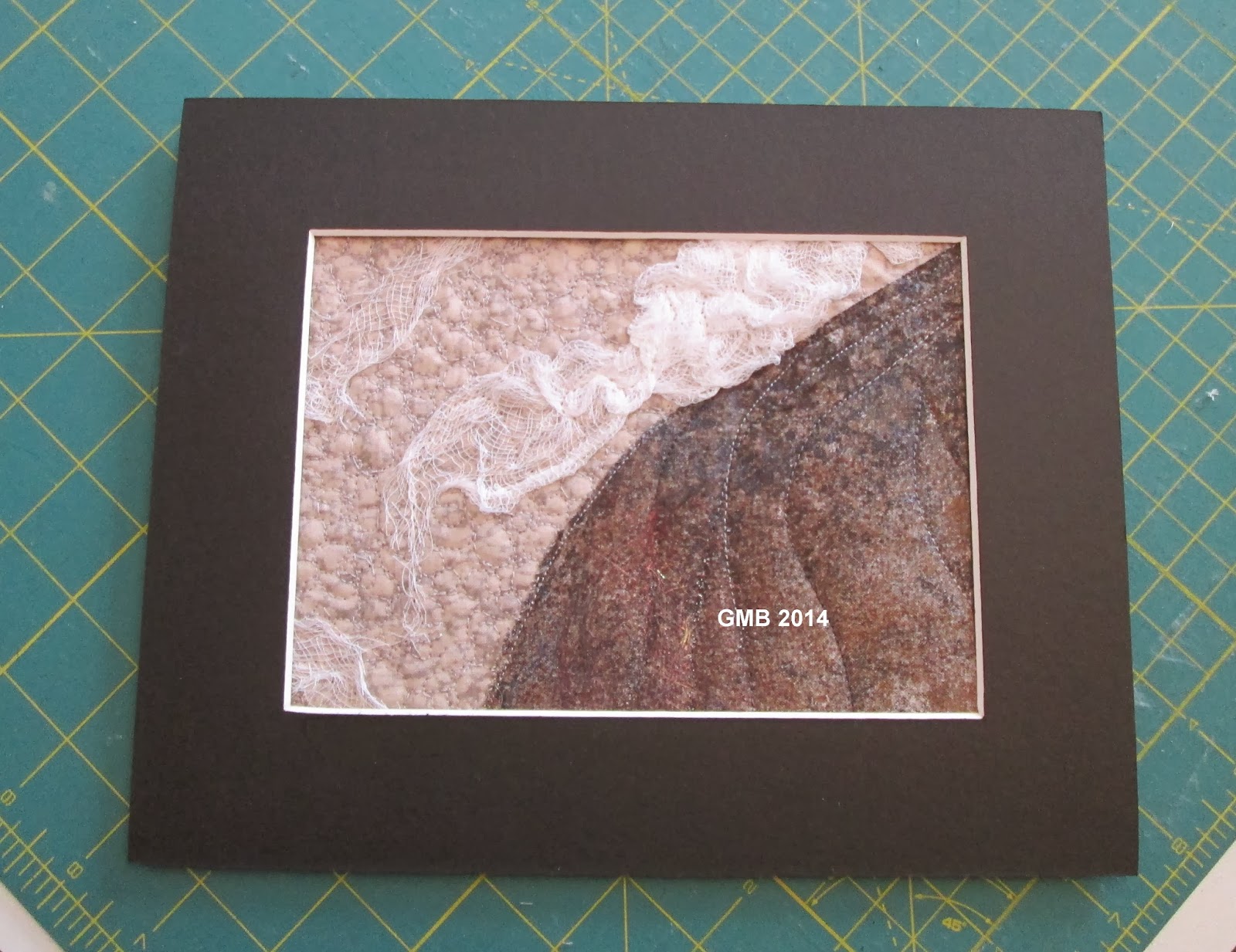 It's not attached to the mat -- that's just there for cosmetic purposes for now.  I'm thinking about painting a few of the quilted pebbles to brighten up the beach as in the original photo.  I used damp cheesecloth for the foam -- dampened because right out of the package it was too stiff to create the right look.  And yes, while damp, I stitched it lightly to the background using clear "invisible" thread, my latest purchase from Superior: Mono-Poly Reduced Sheen.  With dark brown Bottom Line in the bobbin, it worked like a charm!  (No; they don't pay me to say that.  I just really love this brand of thread!)

And there's one more detail I'm not sure you can see in the photo: the water's shine on the rock, which I created with a very light use of two colours of hot-fix Angelina fibre -- "Enchanted Forest Flash" and "Blaze Crystallina".  It gives just the right glint, without being over the top.  The key was to use it ver-r-r-r-ry sparingly!  A little Angelina goes a lo-o-ong way!

Once I've finished with the painting, I'll post an up-dated photo and then go on to the "actual" piece, which I'm hoping to enter into the "Gallery" at the Annual Lacombe Art Show and Sale in April.  The deadline for entries is February 28, so I have to get a move on, as I want to finish a piece from the second inspirational photo at which I hinted above:


I envision some hand work in this one, perhaps beads, and more cheesecloth....Stay tuned!

With all these WIPs, I'm linking up to WIP Wednesday at The Needle and Thread Network.  Let's see what other Canadian stitchers are up to, eh?
Posted by Margaret at 8:46 pm

Wow Margaret, you're really at work. I love it all. How many hours do you have in a day???

Gosh, you are learning lots. The pebble texture is fantastic and the foam!

Don't you just love it when you're on a roll!

You are accomplishing so much!! I am wondering if y'all have more hours in the day in Canada than we do down here in the lower 48?? : ) I'm just green with envy. Your work is beautiful.