"Posh Poppies" is getting closer to its completion.  It's a case of a fairly innocent-looking pattern turning out to be More Work than One Would Have at First Suspected.

That said, I've been doing it as a favour to a long-time acquaintance, and as she's promised not to take orders for further versions of this piece, I am prepared to be generous in spirit when it is finally finished and she asks whether or not she owes me... (wink; grin!)   It's proved to be a good experience for me; I've honed existing skills and learned some new techniques, and now that it's almost finished, I'm glad I took it on.

After four (more) solid hours today, here's what it looks like... 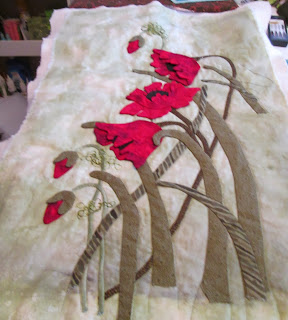 and a couple of detail shots:

What's left?  Beading (at the tops of the stamens); a bit more shading (playing this by ear), and a series of wee off-white flowers that are scattered about the centre/right of centre of the piece.

Then I will baste the "to be framed" area so the recipient has an idea of how to communicate this with her chosen framer.

Meanwhile, I'm linking up with The Needle and Thread Network and hope you'll check out the other participants this week.

Have a good one!

You have added a good bit of interest to this. It is looking great!

I love your poppies , they just leap right off the fabric , wonderful job !

Beautiful:) I hope you show us a picture of it when it's finished.

Your poppies are beautiful!! that soft background is perfect

Fantastic work, that must be an incredible friend to make this for her!