A few finishes on a Friday...reported from my cozy nest on a Saturday morning, wind whipping snow around the corners of the house; fresh, hot coffee at my elbow.  Ah....!

First -- though there aren't photos (at present), there are now two (count' em!) "Mont Blanc" hats on display in the " Bravo Mezzo" exhibit at TCL -- one white with purple-blue stripes and one in the reverse colour-way.

The PLUS is that there is yarn left over, which I've decided to turn into " Maine Morning Mitts" from Clara Parkes' Knitter's Book of Yarn.

And then..."Posh Poppies" is finished -- at least from this gal's point of view -- and ready to be returned to its owner for framing.  (Note that there is machine basting around the perimeter to identify the area intended to be framed -- per the pattern's measurements.) 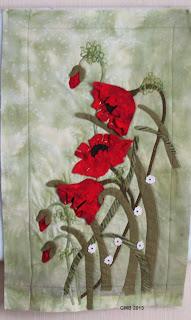 The little white flowers were recycled from a piece of lace in my stash.  They aren't exactly what's called for.  The pattern required me to cut 2" squares from a piece of slinky faux satin, and to sew them, right sides together (!)...leaving a small hole for turning.  Once turned right-side out, I was to take a needle and thread and create a four-petal flower, like so:


Definitely not my forte!

Is it any wonder I switched?  I tacked each one carefully with silk thread and then attached a number six black bead in each centre.  The pattern originally called for brown beads (no size given) -- but I thought the black picked up the black in the poppy centres to unify the piece better.

So.  I'm feeling quite pleased with the effect and hope my friend S who "commissioned" me to make it up for her is pleased too.  On to The Next Thing...

Aprons!  "Aprons?" you ask.  Yes.  The Mirror & District Museum is having its first-ever Christmas Open House and Tea on December 1, and I am making 3 long aprons for the servers (me and two other gals).  A king-sized flat white sheet from Value Village was purchased for the purpose, and yesterday (Friday) I put together the first one: 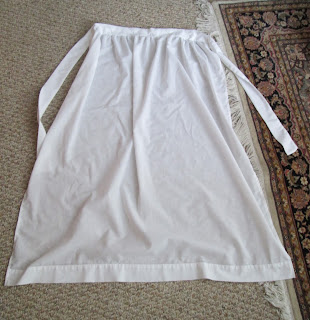 These are long aprons, meant to go over long skirts.  The fabric is thin and soft, befitting a used sheet...and the bottom hem was already in place.  I tore the fabric into 36" squares, gathered the top to 20" (or so) and added a 62" strip for the waistband and ties.  I had a little help with the measurements from a pattern I bought online: "Auntie Dot's Apron" from Jodi Nelson of Pleasant Home.  A few modifications (length, no pocket) -- et voila!

Oh yes...and because I hadn't gathered much of anything in the way of a garment's waist since my daughter was small, I dug out my old Simplicity Sewing Book to make sure I remembered how to do it properly!

One down; two to go!

Last but not least...there is knitting.  In addition to shop samples, I'm doing a wee bit of knitting for Christmas.    Remember these mittens I began 'way back in August?  I finished the cuffs and let 'em sit for quite a while.  Well!  Yesterday I finished the left-hand mitten:

I just love the way this yarn performs!  I've made the entire mitten from the same ball, as well as the cuff for the right hand.  All that remains to be done is the right hand itself.   Here's my old hand modelling for you: 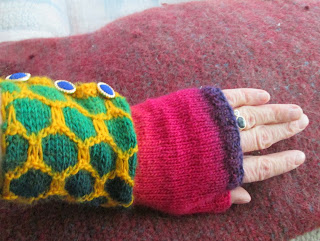 And now to link up with Nina Marie's Off the Wall Friday, and drop on by to see what everyone else is up to!

Busy girl!!! The poppies are so beautiful in detail. I had to put on my glasses, and was rewarded with texture, and that pop of red, black and white. Nice
LeeAnna Paylor
lapaylor.blogspot.com
leeannaquilts@gmail.com

Those poppies are beautiful Margaret! And I like the whimsy of the little white flowers. Those gloves are just too cool! So many finishes-must feel good.

The poppies are beautiful...I hope your friend is pleased. Love the mitts, great colors and cosy!

Great job with the poppies, Margaret. You are quite a friend to do all that. How smart to buy a used bedsheet for the apron. Love the mitts. The colors are luscious.

My goodness, you have been busy! I love the Poppies! They are beautiful. I am sure your friend will be very pleased. I'm with you...I haven't sewn any garment in so long. I would have to look for instructions. Love the mittens too!