And a bit of that for a Wednesday full of WIPs.   Now that The Door Quilt (aka "Forever Blessed") is finished, I'm tackling what's next on the list.

First up was my piece for the October-November 15 x 15 challenge, "Connected" (or "Connection" or "Connecting" or variations on that word).   I've been thinking about it since the middle of September.  I began eagerly with two or three different ideas, but they all seemed to fall flat.  Pardon the pun, but I couldn't seem to "connect" to the theme.

The one notion that stuck with me the most is the fact that the members of our group, while international in scope and diverse in age, talent, skill and style, are all connected through cloth.  I thought about how women like us have used fibre to make connections down through generations -- spinning and weaving first, I think, and then knitting yarn or felting roving into fabric.  Connecting layers of fabric with stitch to make quilts and/or garments, and then carrying it further to embellish those garments. 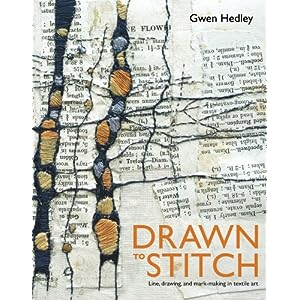 In the end I constructed something with a weaving technique I picked up in the first chapter of Drawn to Stitch by Gwen Hedley -- the chapter about constructing backgrounds, including weaving a background.  Instead of sheets of fabric, though, I fused 5" charm squares to a muslin ground -- 15 in shades of yellow to deep red on one piece, and 15 in shades of blue on another.  Each piece is thus 15" square -- no seam allowance!

Fusible web was applied to the back of each block; then the blocks were sliced in curvy lines, and woven together on a very light-weight background (I used some synthetic drapery fabric I had in my stash).

Here's a detail of how it looked as I began the quilting -- by hand, using hand-dyed perle cotton (#8) and a long, sturdy "carpet" or "doll" needle: 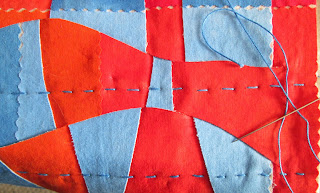 Once the stitching was finished -- at least, one set of rows -- I parked the piece on my design wall and there it sits. 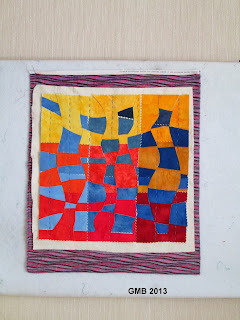 I don't think I want to add any quilting in other direction; somehow it seems it would be too much.  And then there's the finishing.  Already 15" square (remember, no seam allowance due to the nature of the 5" charm squares and no sashing), I can't envelope it.  Folding over the edges 1/4" all the way 'round in the enveloping process would turn it into a 14 1/2" square piece; too small!  I don't want to complicate the piece by binding it -- and I have none of these coloured squares left.  I might dig around in my hand-dyes and do a narrow pieced binding...Or I might use a fairly wide satin stitch finish...It can percolate for a while, as there's plenty of other work to do, such as...

I have a few samples to make for the shop, the first of which is a knit toque for Lori's "My Mountain" promotion of Schachenmayr yarns. While the yarns are bright and colourful, and a bit quirky (some have bits spun in that are fluorescent!), they're thick, and most of the patterns call for 8 mm needles and up.  Now most of you know I'm partial to socks, fingerless gloves, scarves and lighter-weight hats -- so the fact that I chose the "Mont Blanc Hat" as my contribution to the display won't surprise you.    It calls for a yarn the company calls "Boston"; our store substitute -- still by Schachenmayr -- is Bravo Mezzo, a chunky yarn that works to the same gauge.  I'm using white as the base colour but a brilliant purple instead of the red.  I think it's going to look very smart!

Next, as one of two embroiderers now working part time for the shop, I've been trying to expand our embroidery offerings.  We carry DMC floss in every colour under the sun, including some of the variegateds and some of the metallics etc.  Right now DMC has a holiday gift program -- with free patterns -- going in its online newsletter, to which I'm a long-time subscriber (long before I worked at TCL).  So...I thought it might be fun to create a couple of little samples to go with the free patterns and show our customers what could be done.

The first sample involves French knitting, also known as spool knitting or -- when I was a kid -- "corking".  However, it also involves embroidery floss instead of spun yarn...and metallic floss at that.  It's a necklace -- beaded if you wish, or embellished with a single stunning link or bead or whatever.  That said, I learned to do this when I was really young (5 or 6, I think) and had no trouble then... Could it be that difficult to pick up again after 55 years? 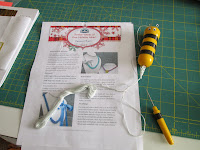 Yes; it could.  Two You Tube tutorials and a step-by-step written set of instructions (with photos) later...I finally got the hang of it using some plain DMC cotton floss (Colour #3756 - "Pale Bay Blue", if you're curious).  But translating this to slippery metallic yarn (I'd selected the beautiful, silvery "Antique Effects" #E415 from the Light Effects collection) -- and adding beads (No. 6 size in a metallic black)?   It might happen -- but not quickly! 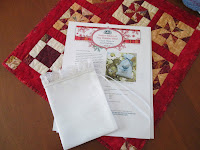 The second sample is easier to handle -- a tiny bag for "Hannukah Gelt"  that has a delightful embroidered menorah on one side.  The pattern calls for a pre-made 14-count Aida cloth bag, which we don't carry, but which is easily constructed.  Here's the one I made this morning, waiting for me to select the floss at the shop tomorrow.  What's neat about this project is that you could use it for any holiday, depending on how you decorate it.  I thought I'd put the menorah on one side and a Christmas tree on the other, just to show the possibilities.

That was enough sampling for one morning!

The WIP awaiting me this afternoon?  More poppy leaves!  Yes, I'll be doing some applique on the "Posh Poppies" piece as I aim to have it finished before year end, if not before Christmas.  While I stitch, I'll be checking out the posts for WIP Wednesday at The Needle and Thread Network.  Come along, eh?

A lovely wall hanging. Love the was the colours flow.

I have that book! You sure have been busy. I do like the graphics in your woven piece!

I love the gelt bag. Your connections piece is wonderful.