The weather this week's been glorious, so I've been spending a good part of each day outside on my back stoop, playing with textile paints, and sampling for at least two projects.

The theme of 15 x 15's next challenge is "Time", and I've been toying with the quote, "To everything there is a season", from Ecclesiastes 3:1 and onward.  In keeping with my love of trees -- especially aspen -- I had in mind to do a piece that shows a single branch through the four seasons.  I managed to find a small piece with leaves in the woods where I take my regular constitutionals, and brought it home with me to study (no trees were harmed in the making of these samples!)

I filled several pages in my sketchbook with sketches and rubbings, and even took a photocopy of the branch, seen at left below:

First I made several quilted samples -- the black thread serving as my 'ink' drawing against a white background.

Then I played with different sources of textile paints to colour in the branch and the background.  My vision was to have the background move from white (or very very pale blue) of a wintry sky to deeper blue of an autumn sky, such as I see here where I live in Central Alberta.

For the first sample I used Derwent InkTense Pencils, of which I have only six: green, yellow, red, purple, black and blue.  This meant I turned to my supply of General's Kimberly watercolour pencils (which I usually use with paper) for brown.  :-) 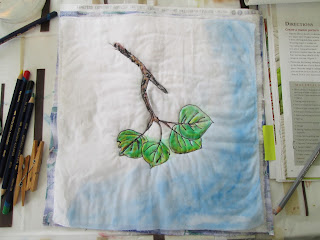 I liked the effect for the leaves and stem but using the edge of the blue pencil on an already quilt-sandwiched piece didn't bring smooth results for the sky.

For the second, I moved to my new Tsukineko mini-workstation's supply of all-purpose inks and "Fantastix" applicators.  I bought this through Quilting Arts when they were having a sale.  I ordered the "Back to Basics" set but was sent the "Colors in Bloom" set by mistake -- a mistake that QA discovered before I did, and for which they offered a further discount off my purchase.  I went with it -- I can always buy more colours if I so choose!  :-)


Another limited palette, so help was needed from my textile paint and a bit of acrylic mixed with textile medium.  I liked the control of the flow of the 'Fantastix' and got a smoother result on the background, but still not quite what I wanted.

I knew I needed to blend colours to get different shades for the leaves, as my supply of pencils and inks limited me to a real spring green.  So...for the third sample I turned to a combination of Jacquard Textile Paints and acrylic craft paint, mixed with a teeny bit of Jo Sonja's Textile Medium to give it more fluidity and a better 'hand' for stitching:


I liked the over-all results of this sample better -- including the shading in the sky.

I decided to apply what I knew about the shading to make samples for the other project on which I'm working: the completion of a hanging, made from a pattern, for a quilting acquaintance.

The kit features poppies, which she really loves;  when she saw it made up she bought it, and a variety of fabrics with which to complete it.  Getting it home, she began to read the instructions -- and therein lies the rub.  Right off the bat, the pattern called for painting some shading along the bottom and up one side of the background fabric.  She panicked and put it away -- until she ran into me at the Central Alberta quilt show in early April.

The pattern is designed in Canada and available through Quilters Haven in Moose Jaw, which had a booth at the show, so we were able to see samples in both red and blue "up close and personal".  I volunteered to take it on for her, and she delivered it to me one afternoon in July, when she and some quilting friends made a day trip to Lacombe and met me there.  She's chosen the red version, and with the selection of fabrics she's given me, I'm sure it will turn out well.

The background is already subtly patterned -- its a pastel green from the 'Fossil Fern' collection by Benartex.  Judging from the Benartex colour chart for this line, I think it's the "Silver Sage" colour way.  I wondered what adding a 'black-green' wash (per the pattern) would add to it.  Fortunately, I had enough of the fabric that I could lop off a couple of small pieces for samples.  Having already played with graduating the shades in a background (above), I suspected it would work best if the fabric were quite wet -- and flat (without the batting!!)

Sparing you the photos of the samples, here's how the background has turned out: 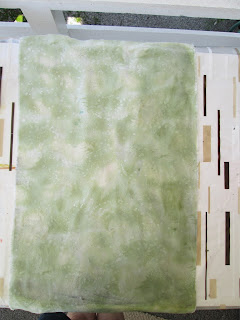 It looks even more subtle in reality, and the placement of the flowers and leaves of the pattern will make all the difference.

So...back to "To Everything..."...and the creation of a painted background before adding the thread sketch.  Here's the small sample, painted with diluted Jacquard Textile Color in "Sky Blue" (what else?!): 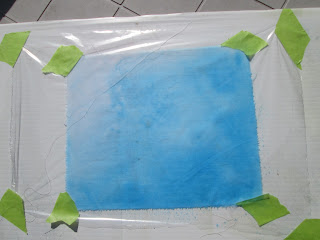 Still rather intense, but the sample is 1/2 the size of the finished piece.  What would it look like with the branch stitched on it?  Going for the gusto, I included all 4 seasons... 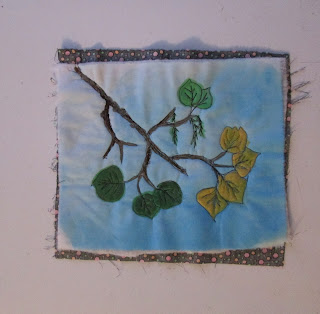 ...and I rather like it, but really, the sky is still too intense.


There I was at 6 a.m. mixing dye, prepping fabric in soda ash (to get large enough pieces)...et voila!!  Subtlety and shading drying in the early sun. 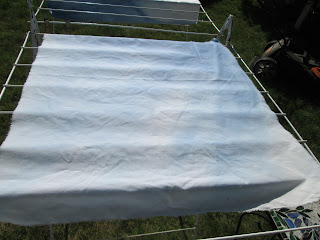 Now to carefully sketch on the branches...quilt and paint them, and the leaves...using...a combination of most of the above, of course!

Linking up to WIP Wednesday at The Needle and Thread Network, eh?  See you there!

P.S. In case you missed it, HERE's the blog post by Ali George re: my piece in the SAQA Trunk Show "C", on show Down Under right now.  Ali's been doing floor talks about it -- and a handful of others -- in the context of the full exhibit at several Australian venues.  It's very cool to "see" a piece through someone else's eyes.  I'm thrilled!
Posted by Margaret at 4:04 pm

Margaret, this is fantastic. Thanks for the details. This pushes my own leaves and branch up to an whole 'nother level! wonderful! ;)

You make the process look so easy. Love your "Circle Play".

Love that you shared your whole process. Waiting to see the branch on the new subtle sky.

I'm so impressed with your Summer School! You are inspiring me. I have yet to play with my Tsukeneko inks. What fun!

You certainly are patient! What would we achieve were it not for very early morning inspirations?!