WIPs on Friday; Finished on Tuesday

Just in from a lovely jog in the sunshine and melting snow.  Don't get me wrong; there's still plenty of it out there and it's still getting darned cold -- and foggy! -- at night, but by late afternoon it's glorious for running under the wide blue Alberta sky.  Even better, today I finished my usual route in a full 2 minutes less than I have all winter!  :-)

The jog was my daily break from the sewdio, where today I finished those two miniatures that I'd prepped on Friday.

NOTE:  This piece was inspired by an old television commercial for a mobile phone service, which advertised it's ability to not disappear in remote locations...like the middle of the Canadian prairie...


I was going to do this as a 12" square for the SAQA Benefit Auction this year, but somehow, it called to be made in a smaller size, so there you are.  I'm relieved that I actually got to use one of my white mats! (I have a second one, but it has a blemish on the front, so it will be used in the sewdio for sizing pieces instead.)

And a second version of "Prairie Autumn" (dubbed "PA II", to replace the one that sold): 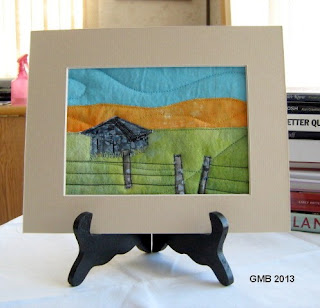 Yesterday, as I reported earlier, I did some more piecing on P's quilt.  Here's where I've left off till Saturday (this is a weekend project for now): 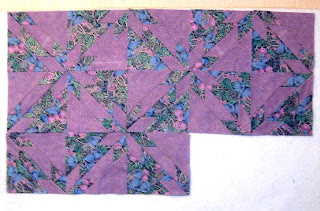 Have you noticed how similar the colours are to those in the background of my blog?  Hmmmm....

And my friend C and I finally got together today to celebrate her birthday, which was actually over a week ago.  Now that she has her gift I can share the finished photo with you:

This design is Thea Dueck's "'P' is for Princess", from her alphabet series, and is, in truth, quite tiny -- no more than 5" wide and a bit over 12" long (with borders). I wasn't brave enough to do the cut-work hem stitch all the way 'round, so C had to settle for it at top and bottom only!  Still, I think it turned out well and she certainly likes it.

On the knitting front, yesterday I finished the armhole shaping on the front of the sleeveless turtleneck top; on now to the neck shaping!

Oh yes, packaging has been ordered for my show pieces, and has been shipped...

Just think!  Less than a month and the show will be over and I'll be having a ball at the SAQA Conference at The Lodge at Santa Fe.  Wow!  Roll on April!
Posted by Margaret at 5:37 pm

Email ThisBlogThis!Share to TwitterShare to FacebookShare to Pinterest
Labels: finishes, miniatures, P is for Princess, SAQA, The Lodge at Santa Fe, The Victoria Sampler, Thea Dueck

So, maybe we can go for a run together in Santa Fe. :)

I really like these matted scenes. I need to do some. We haven't gotten above freezing at all in March! ???

The miniatures are lovely..serene images!