After a busy week in the sewdio, concentrating on new and ongoing pieces, I often like to take a complete break on the weekend.  This weekend I turned to piecing, as I did when I was working on Easy Street.  My in-progress Block of the Month, "Cinnamon" is one example.  I finally finished that fussy Block #3 that I was worried about, shown here on the top of the triangle with her sisters. 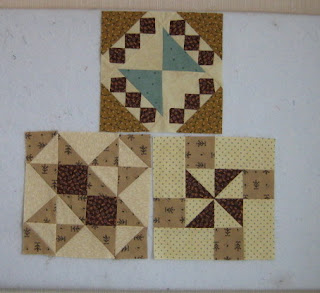 This weekend I started another pieced quilt -- a form of Hunter's Star done in two 'colours', from a pattern in the June 2006 issue of Better Homes & Gardens Creative Collection: American Patchwork & Quilting.  The designer for this piece is Jackie Robinson, and she uses a rotary cut formula to create the star effect.

I'm making this piece for my friend P in Montreal, who's having a Significant Birthday in June (even more significant than my 60th last fall).  I'm making the quilt from stash, and will make it only as large as materials allow, because all of the fabrics in question are long out of print.  Here are the first blocks positioned on my design wall: 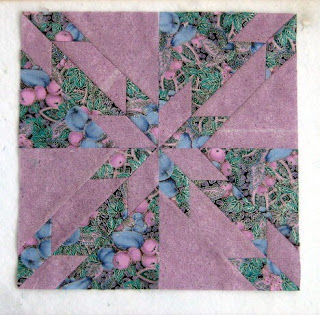 I'm using a small-scale tone-on-tone print for one 'colour' and a large print for the other, so that they read as mauve and blue respectively.  There's a glint of silver and a hint of turquoise in the large print, which may figure in the border(s) or binding.  So far, anyway, I'm delighted with it, and hope to have it finished by the time I see P on a trip down East later in her birthday month.

As for the reason I took the break?

And "Waiting for the Train" is partially quilted.  It was fun going 'round the graffiti: 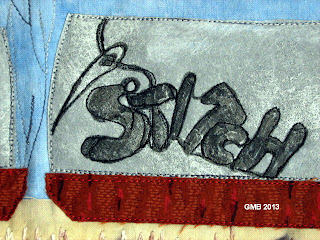 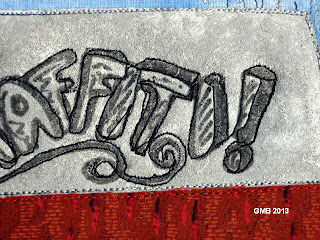 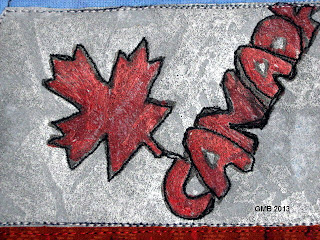 The sun is now high and it's as warm outside as it's going to get today, so I'm off for a walk.  This evening, perhaps a bit more of the Hunter's Star will take shape.  Have a great rest of your Sunday!

Margaret,
All these projects really reflect your growth and dedication. They are all beautiful. Your friend is very lucky that she is going to have such a beautiful quilt! I love Vespers - the circular quilting in the sky offset with the three birds is perfect. I predict that will sell quickly!

Love your graffiti piece my dear Margaret. What a lucky friend you have to receive a quilt made by you. What kind of batting are you going to use?

Thank you my dear for answering my question I asked you because I'm running low and need to buy more. I bought a brand that I don't like because each time I stitch a little comes out with the thread holes!