A few days ago, Susan Being Snippy posted about being part of  an 'organized slow time' for the next few weeks, where blogging is more about the visual and less about the verbal.  (She got the idea from a gal named Susannah Conway.)  While I've decided not to formally participate, I have been a tad quieter, spending more time outdoors and less at the computer, finishing pieces and starting new ones, or gathering new ideas.  My objective: to clear out some of the clutter in my studio (not merely putting stuff away, but actually making it up into other 'stuff'), so I can get a good start on those Crazy Quilt blocks again in September.  And work on some projects drafted in my sketchbook for ages.  And for Another Idea that I'll say more about later.

So.  My long-time friend, C, and I have Big Birthdays in September.  Her's comes six days before mine. :-)  She and her husband came out from The City for a day trip on Saturday, and over lunch al fresco, we figured out we've been friends for 45 years.  That and the birthday called for some celebrating, which is why I made her this:


It's tiny -- only 6" square (or so), and I left it on the linen 'as is', so she can frame it or make it into a cushion or whatever she wants.  Though C is a far superior stitcher and quilter, she rarely takes time to do so.  I figured she might need this little reminder as we approach our next decade!

Next, in the wake of Ravelry's "Tour de Fleece" spinning challenge, you may recall that I had a huge wool batt I wanted to spin up.  Over the period of the challenge, I managed to get all of it done except for a few doughnuts of prepared roving.  This week, I spun up the last of it, and have two more skeins of two-ply yarn for my trouble.  This brings the total of two-ply skeins from that one batt to fourteen!  My plan this winter: to knit a simple Shetland shawl, probably from Cheryl Oberle's Folk Shawls...after I finish my latest sock commission and get a head-start on Christmas gifts!

In the C&G department, I finally got some painted fusible web to work!  The one variable I hadn't checked was the paint.  In earlier samples I'd used a combination of diluted craft acrylic and higher-quality metallic acrylic.  I only own one tube of 'artist grade' acrylic -- in black, bought for the purpose of painting stretched canvas, on which to mount small pieces.  I am parsimonious with my more expensive supplies, but decided that this experiment would take only a wee bit of paint and if it worked, I could slowly collect a few other colours (primaries, to blend myself) in the high-quality acrylic line.

Being a bit lazy this time out, I decided not to take the time to trace more elaborate shapes; I simply cut strips of the painted fusible at random, and ironed 'em on the cloth. 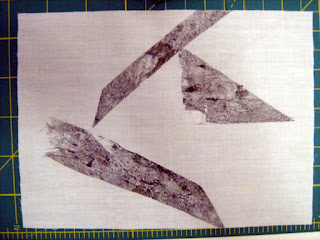 I liked it so much I decided to use this for my sample for the next C&G assignment, which involved finding a way to combine techniques.  Fortuitously, at the very same time, I received an e-mail from Gail Harker Studios, inviting me to submit a small piece to their silent auction fund-raiser, "Black, White and Red".  It was to be no larger than 5' x 7" finished, and then mounted on a black (or white) piece of mat board, exactly 5 1/4" x 7 1/4", so that all pieces submitted are exactly the same size.

This is the result -- a sample for my assignment that in turn becomes a piece for the auction:


This weekend I'll pop by the art shop in Stettler and buy a couple of pieces of black mat board, having the shop owner cut them for me so they'll be nice and even.  I have a second black and white sample that I might do up as well (I can send more than one).  Meanwhile, this project will cover not just one but three C&G assignments, once I get it mounted and send my tutor a final photo. Whoo hoo!

Nonetheless, I have gone back to my first shadow applique sample and am working out the stitching... 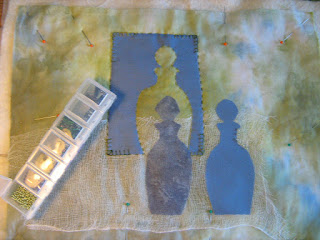 Though my favourite sheer selection was the shot blue, I took a second look at the grey tulle -- since everyone seemed so very keen on it, including my tutor! -- and decided in the end to go with it.  It's now sandwiched and basted so that some of my stitching will be through all 3 layers.  I call this "quilt-a-broidery". And I've auditioned the tiny green beads (lower left-hand corner of the photo) and since this picture was taken, have added some to the piece.  Final results will appear in a later post!

Outside the C&G, in the Studio Proper, I resurrected a piece I began a year ago (at least), one of an eventual series entitled 'Abandoned'.  This is the second in the series, actually.  The first piece, originally entitled 'Watching', is now finished and mounted on linen-covered stretched canvas, with a slight change in title:


By the time I last set this second piece aside, I had done most of the main hand-stitching I wanted to do (I thought),   It called to me, wanting shrubbery and trees and something done with the sky.  Having just bought myself a needle-felting starter kit (sponge and needles) and having an abundance of roving and yarn about, and having Beany & Littlejohn's DVD, In Action as a guide, I worked on it yesterday afternoon as the rain poured outside my window. 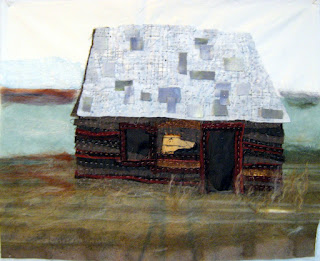 Here it is thus far -- with needle-felted grasses and background shrubbery, and just a hint of turquoise in the winter sky.  More patches need to go on the roof, and there are trees to stitch in on the left...so stay tuned!

Now...back to work.  The sun is out, so I may just take some of the stitching into the garden for the afternoon.  (Before I go, I'll link this post up with WIP Wednesday on The Needle and Thread Network.)

I can't imagine finishing that much in such a short period. It is beautiful! Maybe I need to work smaller... I see how just getting in your studio has made for some great work!

Good stuff. I especially like the shadow applique although the wee house will certainly need to be seen all finished.

I love Triangulation and the Watcher...wonderful work you are exploring, Margaret!

Your work is breathtaking, especially that little house. Did you use jeans fabric for it?