What am I DOing?!

You'd think I have enough to keep me busy.  However, on Monday I decided on a whim to join the "Tour de Fleece" on Ravelry.  It's an annual spinning challenge that runs at the same time as the annual Tour de France bicycle race in Europe (you know: "They spin; we spin."  That sort of thing.)   The idea is to challenge yourself to spin every day of the Tour, and accomplish some sort of spinning goal, taking off the same 2 days to rest as the 'cyclers do.  It's been going on for some years, but I've never thought about it before.  Then I read the Yarn Harlot's Monday post...and something in me said, "I could do that". 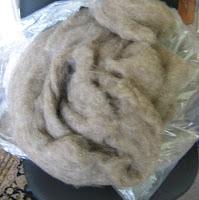 Y'see, I have this huge batt that was given me a couple of years ago by an acquaintance.  It was her mother's, and we think it was originally put up for a quilt batt, but it's all wool -- done at Custom Woollen Mills...who knows how long ago? No matter; it's the perfect sort of thing for a newbie spinner like myself to practice on. When I first began to spin off the batt, I asked some spinning friends what they thought it might be; all agreed it 'could' be Shetland...but no one could say for certain.  From that time forward, though, I've referred to it as my 'Suspected Shetland'. 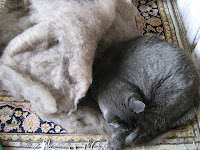 Recognizing I was rather late starting, I thought I'd best get at it, and given we've had rainy, windy weather the past two days, I've devoted much of that time to the challenge.  I think, too, that I've actually made a bit of a dent in the batt...or maybe that's just the shape its in since Diesel, my helper, found it...!


I started on July 2 with an empty spool, and by the end of the day, had this: 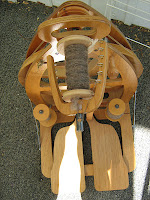 By yesterday, I'd filled that spindle, and another; from these I got two spindles of 2-ply yarn, like this: 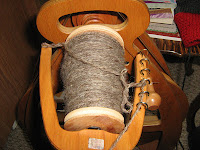 We're at the end of Day 5, and these now have been put up into skeins, soaked gently, and hung to dry.  Here's what one skein looked like on my niddy-noddy: 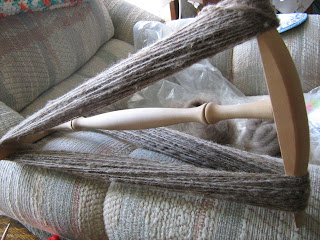 The quality of my spinning started out quite poorly, as it had been several months since I'd done anything on my wheel.  Nonetheless, this yarn will be purely for my own use, and once it was 'fulled' in its bath, each skein actually looked quite decent.

Ideally this, my first 'Tour de Fleece', will see me finishing that batt, and having a substantial amount of yarn to show for it.  However, my real reason for wanting to participate is to build the habit of spinning daily as far as possible, and to improve my (largely-self-taught) skill at the wheel.  One can only hope!
Posted by Margaret at 9:43 pm

I am so impressed! I have never done any spinning, but it is very interesting. What an accomplishment! It always helps to join a challenge like this.

Wow---I had no idea you are a spinner too. No wonder you have been quiet.

Absolutely love your yarn and especially the spinning challenge! There's part of me that almost wishes I'd learn to spin. I need "one more thing to do" like a hole in the head ... but ... it looks as if (once you get the hang of it and practice enough!) it would be so totally relaxing, meditative, and addictive ... plus, all that beautiful yarn! Beautiful stuff!

Oh ... thank you so the nice comments on my blog, and, yes, Steve and I frame pictures. The little frames on all my "sea" pieces are actually "cut downs" from the 107 frames that once were on my Decision Portrait Series pieces. They were made of really, really cheap blonde wood that I crackle painted white. This meant it was easy to touch up with daubs of white paint. After all, these frames have taken quite a beating! All my doll photos are also framed in Decision Portrait frames cut down for them ... and they are going to take a lot more abuse as I'm taking them to Illinois for my upcoming art residency.
Thanks again!
Susan