Recently my daughter wrote about being 'left-brained'.  Very left-brained.  She comes by it naturally.  In other words, the apple doesn't fall far from the tree.

I too am LB.  While I don't hold my emotional cards quite as close to my chest as she does, I'm a pretty black-and-white, detail-oriented, "just the facts, m'am" sort of person.  I did well in math and science (till it got too airy-fairy, like some aspects of physics); I'm a stickler for the rules of grammar, spelling and punctuation.  I have a science degree in nursing (McGill University, Montreal, Class of '74).  As a quick example, according to the "Creativity Test" devised by the Art Institute of Vancouver, my thinking is mainly "reality based, linear, logical, sequential, verbal, [and] symbolic" -- in descending order of influence.  Sixty-one per cent of my way of viewing the world, say the test results, comes under the influence of my left brain, and only thirty-nine per cent from my right ("non-verbal, holistic, concrete, random, intuitive, [and] fantasy-oriented" -- again in descending order).

This makes learning to see with an artist's vision -- and to express what I see -- particularly challenging.  My daughter has discovered the same challenge with photography as I have with fibre art. 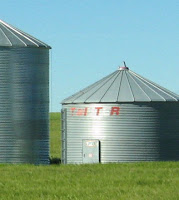 I've mentioned I'm working on a piece for the up-coming SAQA Western Canada show, "Meet the Best of the West" (BOW for short).  However, since my last post on the subject, I got a couple of new ideas about what I wanted to do, and put my initial efforts on the back burner for another time -- because I remembered I had some great photos taken on the road south to Lethbridge last fall, when I was going to visit my son.  At left is a sneak peek of one of those inspiring photos.

For the past few days I've been struggling to interpret my inner vision of the piece in fabric.  I've been resisting the sampling process (again) because I fear that in the process I'll lose the overall picture, get trapped in the details, and never realize the final piece.  That said, I knew I had to sample, because some of the techniques I want to use are pretty new to me, and I didn't want to ruin a piece by racing ahead of my skill set.

First I tried two techniques in one: left) free-motion quilting and then painting; and right) fused applique with quilting and paint: 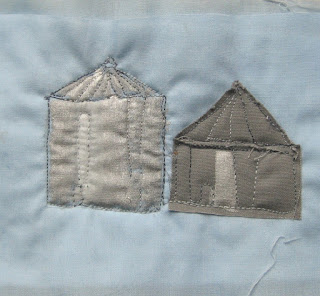 The fused fabric was the only grey I have around, and it's really duck (a type of light-weight canvas) and too heavy for the purpose.  Painting directly on the fabric (I used blue because so much of the building is against the sky) , which had been free-motion quilted, showed my wobbly quilting.  The paint effect isn't bad, but outline quilting free-form is not my forte.

Realizing I wanted to use a fused fabric base for the painting, I wondered what would work because I don't really have anything suitable in my stash.  Then I thought of the roll of Lutradur (R) "Lite" that I bought a couple of years ago and haven't played with.  I got it out and cut out some suitably silo-like shapes, and then proceeded as follows:

I painted the Lutradur and when it was dry, stitched it to the quilt sandwich with my walking foot and Sulky Blendables (R) (lightly variegated) thread.  Then I tried to thread paint int eh shadow on the right side of the building. 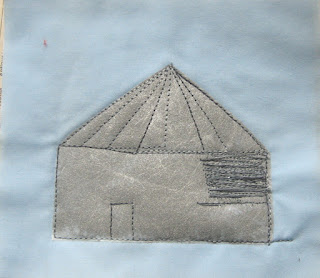 Assessment:  not great either.

The paint (acrylic metallic craft paint) looks fine -- I get the effect I want there -- but painting the piece before I fused it to the top fabric meant I was stitching (albeit with my walking foot) through a rather stiff surface that was unevenly puffy on the side that wasn't thread painted, and flattened on the side that was.  That doesn't even count the fact that I think a different colour of grey thread would have worked better for the painting.

In my last attempt (for today, that is -- these experiments hurt my brain!), I fused the unpainted shape to the background, sandwiched it and stitched it with the Blendables (R) thread and my trusty walking foot.  Then I painted it -- first all over with the silver metallic acryclic craft paint, and then with a hint of white for the sun light, and a hint of darker grey -- which I blended myself from the metallic, some red, some blue and some yellow textile paint -- for the shadow side. 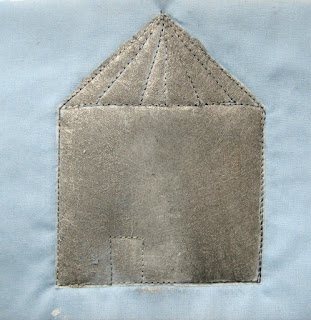 I've had to remind myself I'm not creating a photographic likeness of the building, so I don't have to fuss and stitch in all the lines to illustrate the siding --  that's just my LB talking.  And tomorrow?  I put this aside to breathe for a while and work on Week 9's Crazy Quilt block, featuring Couching.  :-)
Posted by Margaret at 4:57 pm

Hi Margaret,
I agree - the last is best. I love the shadows you have built in with paint. Way to go!
Judy