transitive verb1 : to set free from restraint, confinement, or servitude ; also : to let go : dismiss <releasedfrom her job>
2 : to relieve from something that confines, burdens, or oppresses released from her promise

************ ***************** ****************** ********************
It is almost noon on this first day of the new year, of the new decade. I have just come in from 45 minutes in the bold, bright, brilliant sunshine, soaking up pure air, bundled against the wind out of the south that brings the temperature down. I simply fastened my hood more tightly under my chin and kept going -- now walking, now jogging at a painfully slow pace compared to thirty years ago, when I first took up the sport, when I first ran marathons.
Today, I tell myself, it will be different. This year, this decade, too, it will be different. "It" is the way in which I've been living for the past 3 years -- grief and anger giving 'way to indifference and sloth.
"No more!!" I exclaim, half to myself and half out loud, as I trot along the edge of the road on the edge of to
wn, as I plod into the trail that, in warmer seasons, is a deeply rutted road. I plant my feet solidly as I run, making tracks that join those of the ski-doos and the deer.
My Word of the Year is RELEASE. I began with "let go" but quickly realized I wanted a single word that was concise, compact, and felt good in (and out) of my mouth. Release. Re-lease. Release! In it, I see both letting go and getting -- acquiring a new perspective, a fresh attitude, a new lease on life. 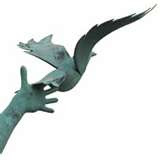 Then the Year in question -- that is, this year -- actually arrived. This morning began as usual. I noticed my right arm and shoulder was aching. I was feeling Dumpy, Frumpy, and Grumpy, and entertaining those old thought patterns like the cozy,
comfy friends they were. Bleah.
I looked out my window at the sunshine, the crystal clear blue sky -- and the wind. The Canadian flag on the neigbour's pole across the street was flapping proudly. A little voice in my head told me that NOW was a good time to put my word into action. D, F, and G had to be released to their own devices -- somewhere far away from me. I checked the Weather Network and waited through a weather forecast on the radio. The little voice, though, wasn't listening to the wind chill numbers. "You can bundle up, " it said, "You used to do it all the time, for years."
That's how I happened to find myself trotting down the road -- first, muttering under my breath, then cursing to the sky, then -- omigosh -- out-and-out rejoicing! I was releasing -- first, D, F and G. Next, sobs and unidentified hoots, hollers and growls. In the end --- laughter. I walked briskly, punctuated by lengthening intervals of jogging. I held my head up, I took deep breaths, I circled my arms forward and back, releasing the kinks, knots and crackles in my shoulders and neck.
In a mere 45 minutes I managed to free myself from the pity party that had been building steadily since I'd got out of bed. I was ready for a delicious light lunch, a pampering bath, a catnap, and an afternoon of stitching/knitting.
The forecast for tomorrow? Bring it on!
N. B. - Bird Released: image courtesy of Millie - Bradford on Avon
Posted by Margaret at 11:45 am

Hello! I found your blog via Ravelry after reading about your quilting art. I have to say that this entry touched me - your wonderful description of getting out and running again after a long(?) period off is spot on! Thank you for sharing!

I've been doing that word for the year thing since 2005 when I read it in a Debbie Macomber novel. Isn't it a wonderful tool? My word for this year is "find" and it's been a good one for me so far. Hope you do well with "Release" - it sounds like that is a good one for you too. Many blessings on your new year ahead.