I love books. I've been reading as long as I can remember, and will read the backs of cereal boxes if there's nothing else around, but you can't beat a book for a good time -- any time. I read when I want to relax, when I want to escape, when I want to learn, when I want to laugh, and even on those rare occasions when I want to cry. I've had a library card for well over 30 years, and it's the best annual investment I make, for nothing keeps me company quite like a book. I even read while I knit, and have bought book stands and book weights to help me with the process!

After the post office, the local library was the place I visited after I moved to Mirror, Alberta in September 2008. I'd been here four days, and was tired of unpacking, arranging furniture and stumbling over boxes. It was a Tuesday, and the library was open for the morning. It took me some time to pull open the perpetually-sticky door, but when I did, I was greeted with the site of shelves and shelves of books crammed into a space not much larger than my living room. To my right was a desk. Behind it, a small woman with ash-blond, cropped hair was bending over its surface, working on Thanksgiving/autumn decorations. She looked up. "Hi!" she greeted me, in a voice clear, firm and surprisingly deep for one of such small stature. She grinned broadly at me; I introduced myself. In short order I was looking around, and we were exchanging 'get-to-know-yous' over the tops of bookshelves as I browsed. When I'd been there about ten minutes, she asked -- without the least hesitation -- "Would you like to be on the Library Board?"

I nearly dropped the book I was looking at! Popping my head out from behind the shelves, I replied, "Can I unpack first?" We both laughed -- the first of many laughs we had together on my regular visits over the next year.

Because we are a hamlet -- run by the county, on the county's tax base -- our library is unfunded, and has to come up with its own ways to raise money for books, and for the librarian's part-time stipend. One of the first events I attended in the hamlet was a fund-raising turkey dinner -- absolutely delicious! As I'd worked in a bookstore in Calgary (one of the best and longest-lived independents, Logos Books and Gifts in Crowchild Square, off 53rd Street N.W., south of Crowchild Trail), and was serving as the librarian for the Alexandra Writers' Centre that year, I managed to wangle some donations for her collection. I decided to read through my own library of fiction and give her the books as I finished them. I managed to knit a scarf for a silent-auction fund raiser, and was very relieved when I learned that it had actually sold.
While I knew this work was for the long-term benefit of the library, in my mind I was doing it for Heather, because I was very fond of her, because we 'clicked' from our first meeting and because, in the end, I would do just about anything for her. She had a lot on her plate, too. She had grown children, and cute grandkids who'd visit the library regularly. We never saw him, but she was busy being a great wife for L, her hard-working farmer husband; they lived on a spread just south-east of town. Her elderly mother was unwell, and she was the primary care-giver (home nursing care notwithstanding). When her mother died, Heather was the one in charge of getting the house ready for sale.
Heather was in the midst of this when we learned that the cancer she'd fought off for a decade had returned -- and with a vengeance. A lump appeared near her neck. Then, as doctors reviewed treatment options (Heather was dangerously sensitive to the usual courses of treatment), I found her one Tuesday morning alone in the library, and very morose. God must have known she needed someone to talk to in private, for no one else came in that day. Heather knew I had a nursing background; haltingly, she explained her symptoms: trouble getting words out, recognizing and writing words and letters... We were both very aware of the likelihood of the cancer having spread to her brain, though it was clear that neither of us wanted to say the "T-word". I gave her a hug; in my embrace she dissolved into tears, and within moments, I joined her. 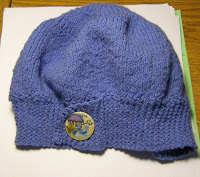 That was in October, just after Thanksgiving. Heather was a fighter, but somehow I knew this was going to be her last battle against this deadly disease. A few weeks ago, I visited her at home, gave her a cap I'd knit (which she donned immediately!), and talked with her over coffee. She asked about foods she could eat in her condition, and as they were visiting the doctor that afternoon, I suggested that she and L, who I'd finally met, talk with the dietitian. Nonetheless, after I got home, I found some recipes for her, and got the post-mistress to pop themto their box.
I called just before Christmas, left a message, and heard nothing. It was time. By then, I know now, she was in hospital, still wanting to fight, but no longer able.
Heather is at peace now, and no longer struggling to speak, write or read. I pray that she's been given the key to a golden treasure trove of all of the best books that Heaven has to offer, and that she's meeting those authors of the great classics and other book-lovers who have gone before.
She was a blessing, and I miss her. May God bring comfort to L and her family, and may they always know what a joy it was to have her in our lives.
Posted by Margaret at 9:10 am