I Have too Been Knitting!

The past couple of days I have been working hard on the project I've entitled "Doug's Afghan", in honour of the fellow who'll eventually receive it. The pattern is the "Mitred Squares and Stripes Throw" from the May 2008 issue of Creative Knitting. I want to finish it by November 18th, in order to drop it off with friends in Calgary who'll make sure Doug gets it. So..."What's left?" you may ask. What, indeed? 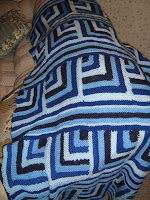 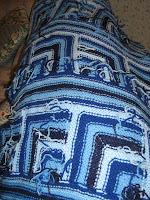 Then there are The Ends...

Yes, some of them were woven in as I went along, but they still need to be secured and trimmed. So...

Bess has her Adult Surprise Jacket -- and I have my afghan. Would that we could spend a day together sewing!

Email ThisBlogThis!Share to TwitterShare to FacebookShare to Pinterest
Labels: knitting

Weaving in ends are the last sweet kisses our fingers give our projects. After that they are just clothes.